Packing everything you need, getting to the airport on time, and going through security is already stressful enough – and that’s all before you’re crammed into a small seat too close to the person next to you with nothing but recycled air and miniature snacks to hold you over. There are many things to look forward to when it comes to traveling, but airline travel won’t always be on that list. And while some things can help take the edge off (like bringing a good book or upgrading from coach), another key element to quality in-flight experiences are the flight attendants. Not all flight crews are created equal, but we’ve got the inside scoop regarding getting on your flight attendant’s good side and making your ride (and theirs) as smooth as possible. Read on to see what 119 flight attendants had to say about their biggest in-flight annoyances and whether they feel prepared for unexpected emergencies in the air.

The Truth Behind the Beverage Cart 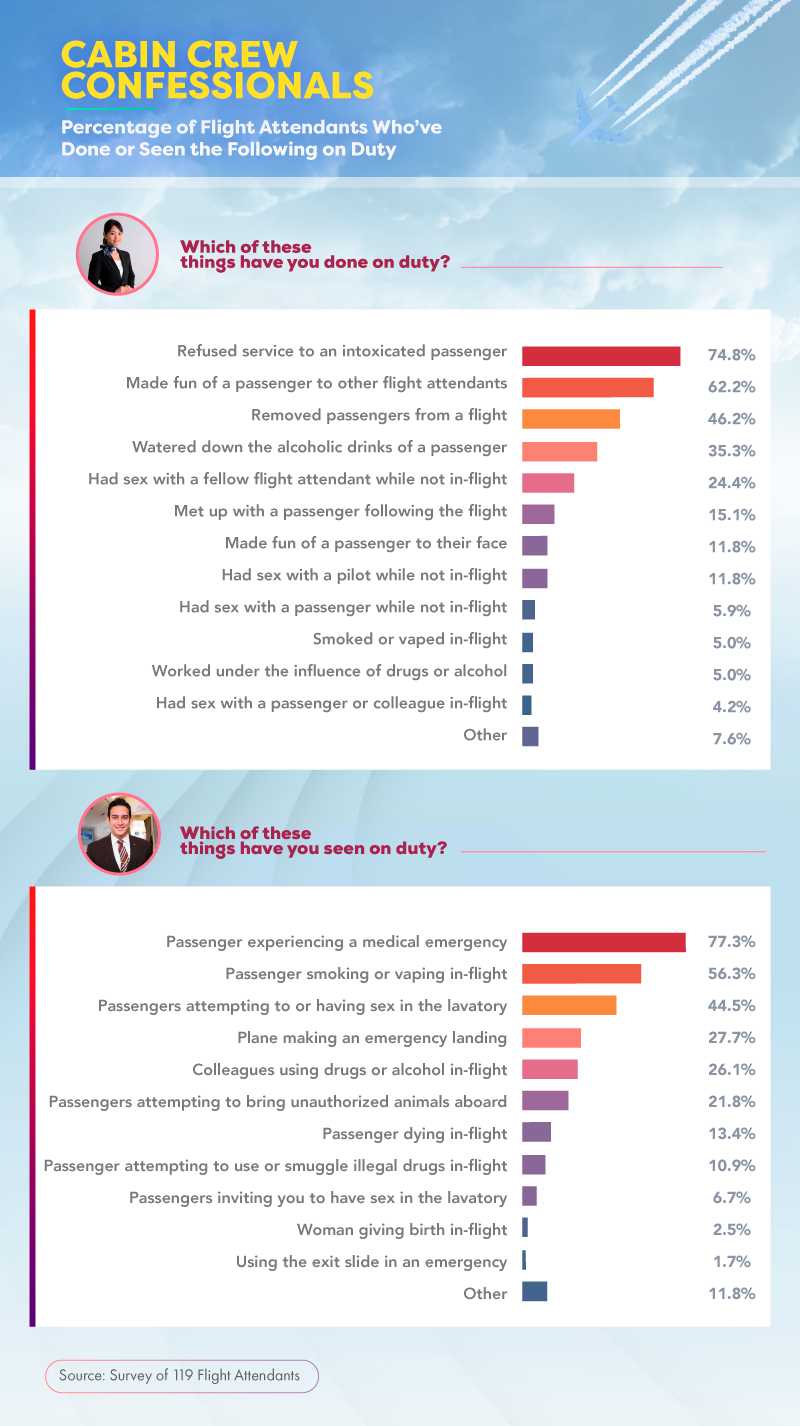 You might wonder what’s really going on when the cabin crew isn’t reminding you to buckle your seat belt or trying to upsell you on the snack cart. Drinking might help calm your nerves if you’re a stressed flyer – and there’s no proof that drinking at a higher altitude will get you drunk faster – but you should expect to get cut off if you decide to overindulge. Nearly 3 in 4 flight attendants admitted to refusing service to an intoxicated passenger. Some of their other in-flight confessions might be a bit more surprising, though. Around 35 percent have watered down a passenger’s alcoholic drinks. Never mind how much you might be paying for that gin and tonic, you’re probably not getting as much substance as you’d expect. Roughly 62 percent said they’d made fun of a passenger to the rest of the crew, and another 1 in 4 said they’d had sex with a fellow crew member while not in-flight. While less than 6 percent had had sex with a passenger, nearly 45 percent had seen passengers attempting to join the mile-high club in one of the plane’s bathrooms. 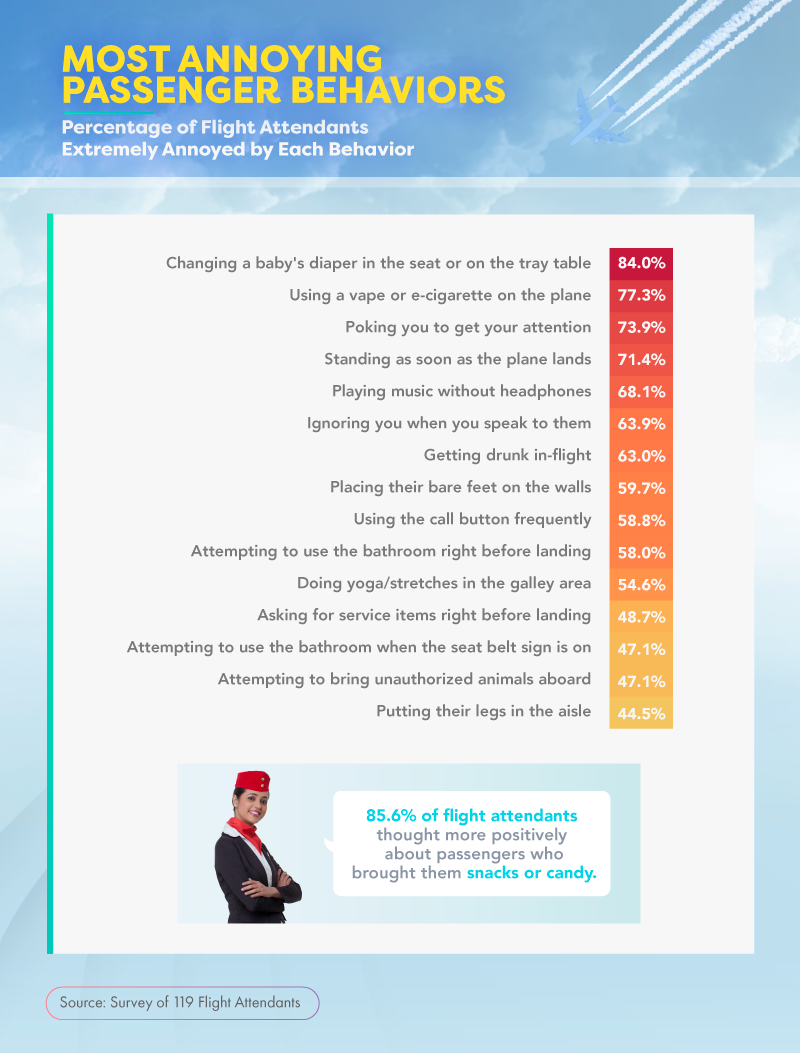 Considering your flight crew might not hesitate to water down your drinks or secretly make fun of you, it’s worth noting the behaviors that could you put on the wrong side of the aisle. Flying with a baby is already stressful enough. You might worry how they’ll handle being cooped up for several hours or whether they’ll disturb fellow passengers, but you should probably think about how your flight crew will react if you decide to try and change them without getting out of your seat. Eighty-four percent of flight attendants considered it most annoying when passengers changed their baby’s diaper in the seat or on the tray table. Many planes are equipped with changing tables in the lavatories to prevent this dirty deed, but if you don’t see one, always check with the flight attendants to best avoid their disapproval.

And as much as you’re tempted to move at your own risk while in-flight, it’s worth recognizing how your flight crew will react. Most considered standing up as soon as the plane lands (around 71 percent), putting bare feet on the walls (nearly 60 percent), trying to use the bathroom right before landing (58 percent), and stretching in the galley area (almost 55 percent) as highly irritating passenger conduct. 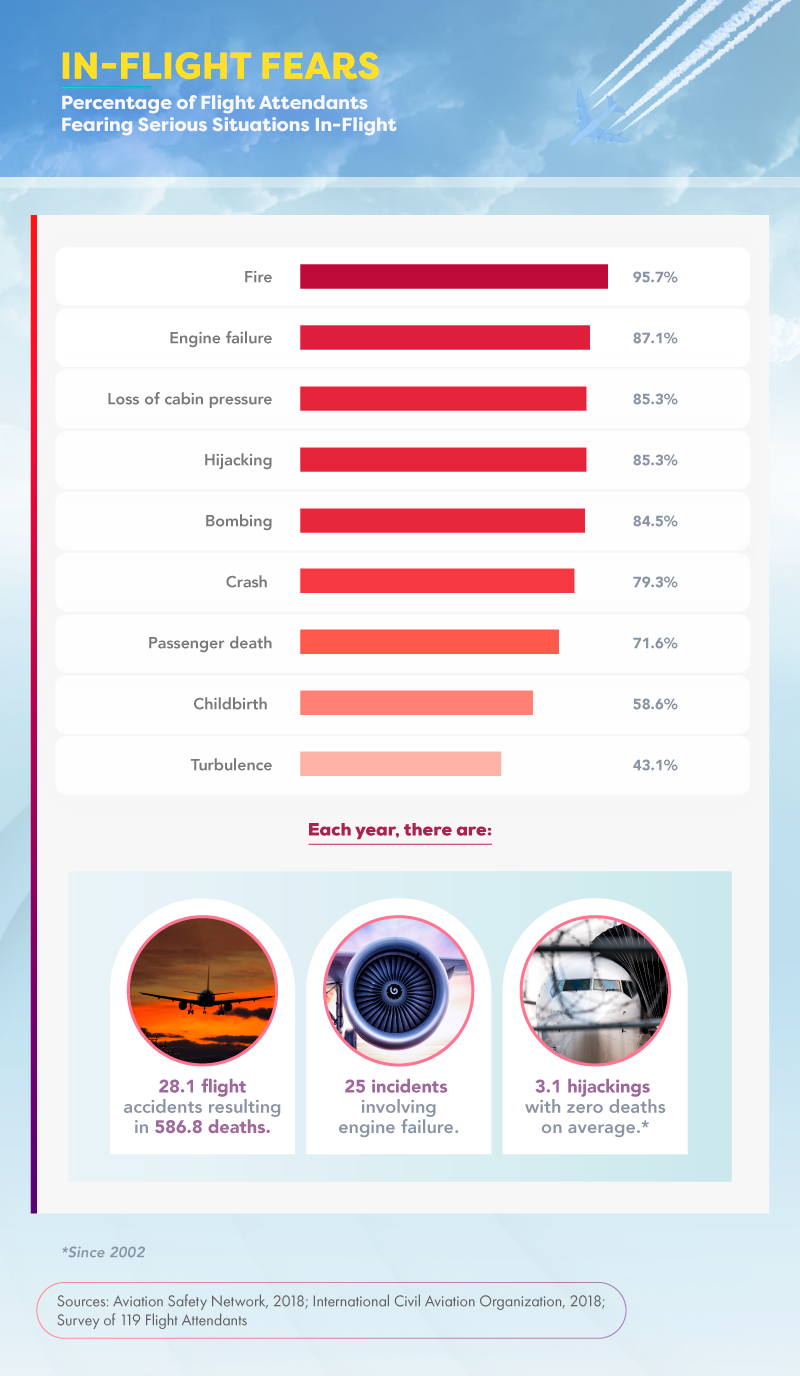 Fear of flying doesn’t always just manifest as intense feelings before and after takeoff. It’s a serious medical condition that affects roughly 2 to 7 percent of Americans. Even though flying is one of the safest modes of travel, you might still feel a little uneasy at takeoff or landing, and that’s completely normal. Even though flight attendants fly frequently and are trained to handle catastrophes, they also get nervous in the sky sometimes.

Beyond engine failure (87 percent) or a loss of cabin pressure (85 percent), it was in-flight fires that worried most flight attendants (nearly 96 percent). Electrical and mechanical malfunctions can cause fires on planes, but passengers also play a role in keeping the skies safe and friendly. Lithium-ion batteries (like the kind built into some suitcases or in phones or laptops) can also be hazardous, and some airlines insist they be removed as a safety precaution. Nearly 59 percent of flight attendants also feared a passenger going into labor while flying. Many airlines will allow pregnant women to fly up to 36 weeks. Every company is different, though, so be sure to review your airline’s policy if you’re planning to fly while expecting. Although in-air catastrophes are relatively rare, this doesn’t stop flight attendants from worrying about hijackings (85 percent), bombings (over 84 percent), crashing (79 percent), and the death of a passenger (almost 72 percent).

Hoping for the Best … 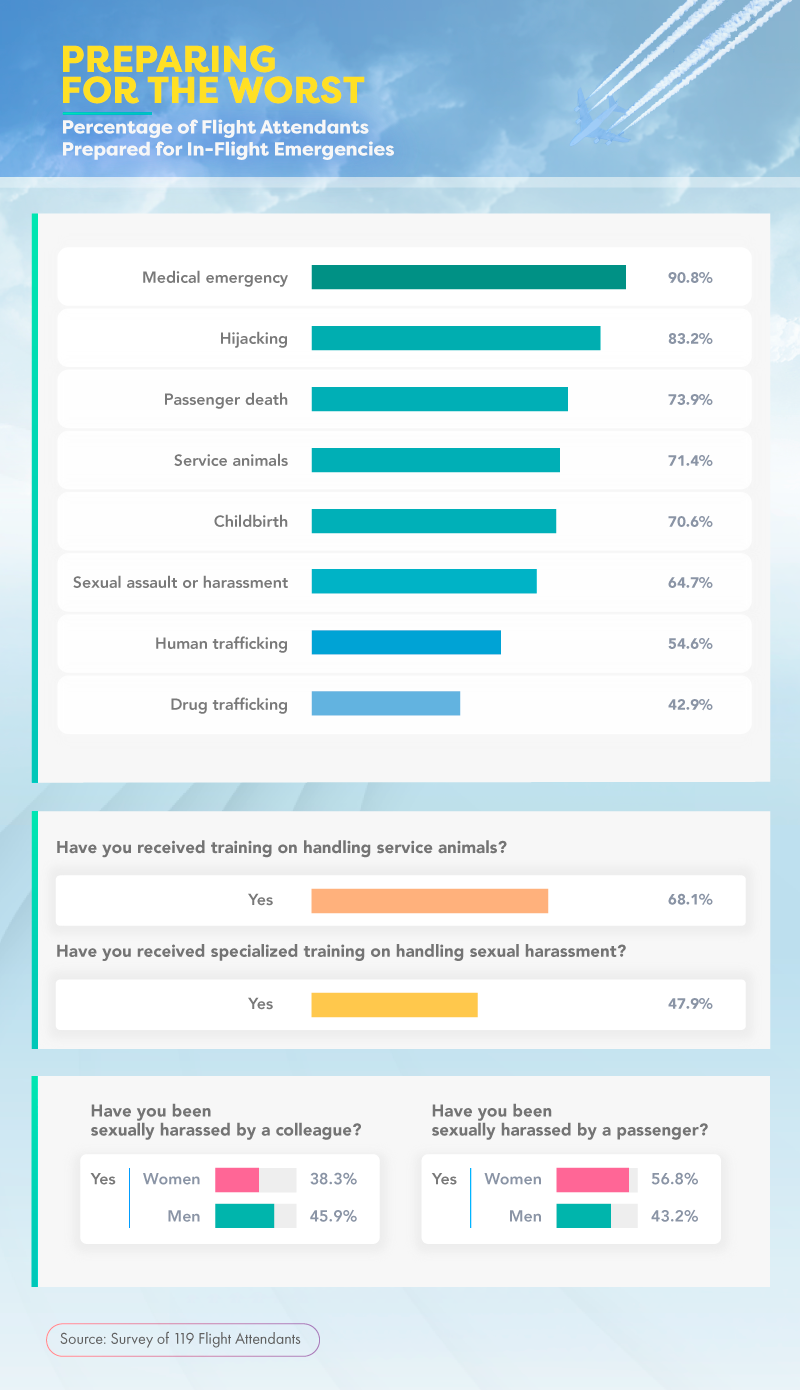 Despite having to manage stressed travelers and their sometimes aggravating behaviors, being a flight attendant can still seem glamorous. Jet-setting around the world, seeing new destinations on a regular basis, and even the killer employee discount on personal flights are all perks of the job – if you have what it takes to get through the rigorous training programs. In fact, Delta may rank as one of the best airlines to work for, but you probably have a better chance of getting into an Ivy League school than being invited into its training classes.

Flight attendants learn procedures to deal with even the most extreme emergency situations. According to our survey, almost 91 percent felt ready for a medical emergency, and over 83 percent said their training equipped them to respond to a flight hijacking as well. Around 3 in 4 flight attendants felt adequately prepared to deal with a passenger death, while roughly 71 percent were prepared for a service animal on their flight or a passenger giving birth. Sixty-eight percent said they’d been trained on handling service animals, but less than half said they’d had training on dealing with sexual harassment. Unfortunately, both male and female flight attendants said they’d experienced sexual harassment on the job. Over 56 percent of female flight attendants were sexually harassed by a passenger, and nearly 46 percent of male flight attendants experienced sexual harassment by a colleague. Some cabin crew members even say it’s an expected part of their customer service position. Recently, however, congressional representatives have called upon major airline executives to address what’s become a rampant issue in their industry. They hope this will pressure airlines to better protect the professionals who care for their customers in the air.

A Better Way to Fly

When you’re trying to cover long distances in the shortest amount of time, flying is usually your best bet. It may not always be the least expensive (or stress-free) option, but it is the safest way to get around. Still, the quality of your flight attendants can have a serious impact on how well you enjoy your flight, but if you aren’t careful, you could do something that puts them off or jeopardizes your safety. Using the call button too many times, asking for service items, or trying to use the bathroom before landing could earn you a curt response. Thankfully, there’s a better way to fly with a higher standard of service no matter what seat you’re sitting in. Flying with Stratos Jet Charters is a luxury experience, so you’ll never have to worry about agents with an attitude. No matter where you’re going or why, our mission is to always deliver an exceptional flying experience. But don’t take our word for it – book your next private jet charter today at StratosJets.com and discover the difference for yourself.

We recruited 119 flight attendants to participate in this study using a combination of Amazon’s Mechanical Turk and Facebook advertisements. Most participants (78 out of 119) were found via Facebook advertising. Forty-four flight attendants were from the U.S., and 75 were from other countries. Eighty-one were women, 37 were men, and one was nonbinary. The data in this study were not statistically tested nor weighted.

Since we only surveyed 119 flight attendants, it is possible that a larger sample size could have shed more light on their experiences. Flight attendants also based their answers on their own opinions and recollection of events, which can mean our data may be influenced by participants’ selective memory, exaggeration, or minimizing. Since we recruited our participants using Mechanical Turk and Facebook advertising, our participants’ demographics and answers may be slightly different than if they had been recruited using other methods.

Ready to take flight? We’d love to see the results of our survey shared on your website for any noncommercial use. You don’t need to use your call button to ask, just make sure you include a link back to this page so that our contributors also receive recognition.