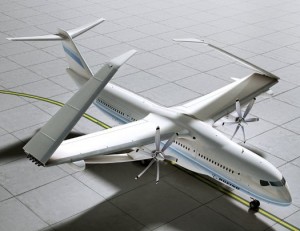 Most consumers have become quite familiar with hybrid cars, which use a tandem of a gas-fueled internal combustion engine and an electric engine to power the vehicle. They probably haven’t ever considered the application in commercial jet aircraft, however, it is something that Boeing wishes to change with their experimental SUGAR Volt hybrid propulsion system.

Just like with cars, the best way to conserve jet fuel is to simply turn off the gas engines. Of course, to do this there must be an alternative, feasible power source available. In the case of the Boeing SUGAR Volt system, which is short for Subsonic Ultra-Green Aircraft Research aircraft, that power source includes battery packs and electric motors to propel the aircraft once the gas engines are cut. With the initial challenge and funding for the project originating from NASA, the SUGAR Volt plane is comparable to the Boeing 737, with a 3,500-nautical-mile-range. It would draw energy from both jet fuel and batteries during takeoff, and once at cruising altitude pilots could switch to an all-electric mode.

At this point the SUGAR Volt aircraft is still firmly in concept phase, with much of the necessary technology required to refine the plane well enough for commercial use needing further development. One of the most critical challenges that will need to be overcome is the obvious drawbacks of carrying heavy batteries as a power source on long-haul flights. In fact, Boeing engineers target 2030 as the timeframe needed to build a commercially-available hybrid aircraft, with the goal of a 70-percent improvement in fuel burn as a primary outcome. This long timeframe hasn’t stopped the forward-looking team at Boeing from taking on the challenge of designing a hybrid-electric-powered commercial aircraft however.

In addition to major power plant innovations, Boeing’s design also incorporates many aerodynamic innovations as well. This is primarily because Boeing engineers see the problem of battery weight being an issue for electrically powered aircraft in the future. The hope is that improved aerodynamics may be able to offset the heavier loads being carried by the plane. The SUGAR Volt uses a high-aspect-ratio wing long enough that it would be strut-braced and have to be folded to allow the aircraft to fit at a standard airport gate.
The SUGAR Volt also seeks to offset weight with savings in structural weight. The Boeing team believes that a combination of a more efficient wing, structure and power plant could lead to the targeted fuel savings. The fuel itself might also come in another form. Boeing engineers are considering the possibility of using liquefied natural gas, not an obvious choice for a future aviation fuel, instead of current jet fuel. Using this fuel would require significant changes in fuel-tank engineering and the fueling infrastructure however.

The team at Boeing is committed to developing their SUGAR Volt technology until it becomes commercially feasible in future aircraft. In addition to the major cost savings that come from greater fuel economy, there would of course also be significantly lowered emissions – a clear benefit to the environment with fewer smog-forming pollutants and carbon dioxide being released into the air.

According to comments from the Boeing team’s report, in the long-run hybrid electric engine technology “is a clear winner.” Marty Bradley, the leader of the initiative at Boeing, says the design incorporates some technologies for the sake of making sure they are developed enough to become viable options at some time in the future. Bradley has stressed that the purpose of the SUGAR study is to â€œstart the industry thinking about and planning technologies that future vehicles will need in 2030 to 2050. While Boeing is interested in developing environmentally progressive vehicles, it would be premature to conclude that any of the concepts we study under this contract will replace any of Boeing’s commercial products.

Still, it’s very clear that the benefits of these technologies being developed and utilized in the future should be significant, and certainly justify investing today for a large potential payoff years from now. At Stratos Jet Charters we firmly support the advancement of aviation technology, and are as curious as anyone in seeing the cutting-edge innovations that will come years from now from the team at Boeing and elsewhere.