I remember my first private flight with my dad like it was yesterday. I was 12. It was 8 am, and my dad pulled into the school parking lot and hollered, “Joel, we’re going for lunch.” I said, “But dad, it’s like, eight o’clock in the morning.” “Do you want to complain and stay here, or do you want to go for lunch?” he replied.   So, I got in his car, and then his plane, a 1963 V-tail Bonanza M35. I still remember the tail number, 9860-Romeo. We flew to the Bahamas, and had lunch. When he dropped me back at school, he said, “Now don’t tell your mother.” And I didn’t. It was the first of many $100 hamburgers, or so we called them—the excuses to fly somewhere, anywhere not too far, for a burger. My dad wasn’t a commercial pilot. It was his hobby. And soon, it was mine. I spent summers riding my bike to the local airport to hangout with my dad and to be near the planes hoping he’d take me up in the traffic pattern. I helped my dad change the oil, check the tires. I learned how to talk flying on ‘First Fridays’—a monthly event at the airport where pilots and other aviation enthusiasts would get together and tell stories over, you guessed it, burgers. I guess I’ve had a lot of burgers over the years, and a lot of great conversations with pilots from all walks of life. I’ve been lucky.

I’ve had a lot of great conversations with pilots from all walks of life. I’ve been lucky.

When it came time to go to college, I followed the footsteps of my older brother and worked towards a finance degree. My girlfriend then was an executive assistant for the owner of a major sports team, and one afternoon she called and said she needed help to arrange a private jet rental for her boss. I happened to be at the airport and connected her to a carrier who could do the private jet flight. A few weeks later, perhaps at one of those ‘First Fridays,’ the carrier called out, “Hey, Joel, I’ve been looking for you.” “Oh?” “Yeah. Got something for you.” And he slid me a check, my cut of the private jet flight I had inadvertently brokered. Not long after graduating from college, I got a job working for a national investment firm, and I was doing well, but I never felt like they were invested in me. A friend of a friend happened to be working for a firm that provided private jet charter services, but he spoke often about how so many in the industry seemed dishonest and out for themselves. Because I had a deep understanding and passion for what the ideal private jet experience could be, I thought about what a better private jet broker company could look like, and realized I could really raise the bar. So, with money from the house I bought in college and a loan from family, in 2006, I founded Stratos Jet Charters. 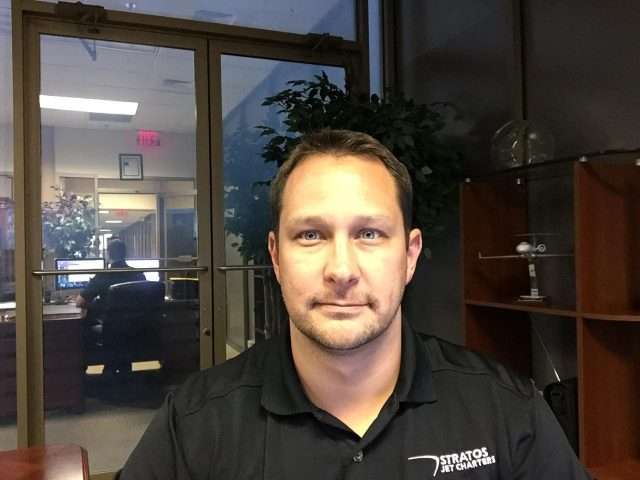 Joel Thomas, Stratos CEO & President, at the company’s head office in Orlando. Early in the business, Joel realized his standard of private jet charter services would be welcome well beyond Florida.

The timing was less than ideal. Within two years, the recession’s icy fingers had touched everything, and now customers cared most about cost rather than safety or value. Because my priority was always expanding clients’ margin of safety, I and my agents always recommended the safest options—safest aircraft, vendors and routes. Sometimes that meant we lost sales, but I knew we were doing the right thing. Through my advocacy for safety in the private jet charter services industry, I’ve been able to serve some meaningful posts, including president and chairman of the Air Charters Association of North America (ACANA). Stratos was one of the first private jet charter companies to be a part of the Air Charter Safety Foundation’s broker program, and one of the country’s first ARGUS certified jet charter brokers. I’ve spoken at a number of aviation conferences focusing on safety and contributed to industry magazine articles on pressing topics. Over the years, I helped lead our company toward a number of other firsts: first off-set your jet program to make flying more environmentally responsible; first trip support department to handle all the little details, like catering and ground transportation. And I’ve had some pretty amazing experiences, including chartering a jet for and meeting an Arab nation’s head of state, impressing the carrier for that flight and then being personally flown to Pontiac, Michigan, to meet senior members of Pentastar Aviation, a leading carrier. They made it easy to see what excellence looked like early in my career, and I know it’s made a difference. In 2016, Stratos Jet Charters celebrated its 10th anniversary. 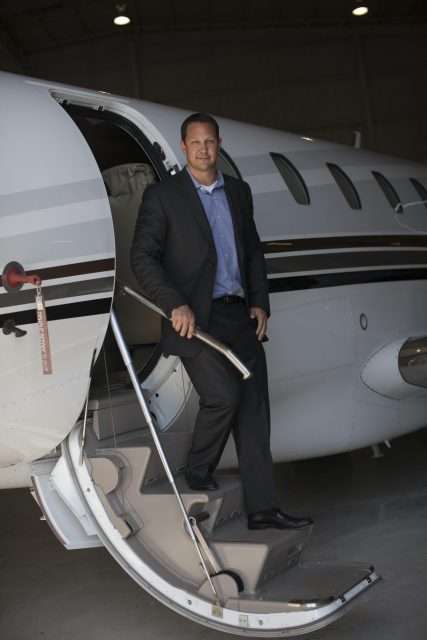 Stratos Jet Charters President & CEO Joel Thomas was proud, on the company’s 10th anniversary in 2016, to say that Stratos’s first client is still a client.

Ten years into the business and almost a lifetime spent at airports, I’m still as passionate about flying and providing an experience with private jet flights that raises the bar for safety, customer experience, and education. There’s still work to do. In the years ahead, I want to see technology developed that will enable us to help clients make even more informed buying decisions. We’ll get there. Because in addition to this business I also have my pilot’s license (and am currently coveting a Cirrus SR22), I know firsthand the freedom that comes from being able to fly privately, and where the bar stands. Over the years, I’ve been fortunate to become good friends with a number of clients—hardworking, humble, down-to-earth gracious people who have helped make this company a success. If you’re one of them, thank you. –Joel Thomas, President & CEO, Stratos Jet Charters.