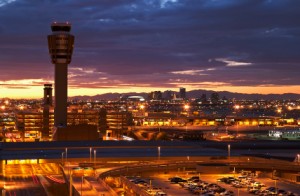 As leaders in the jet charter industry, we work to give our clients all of the information that they need to make smart decisions concerning their private air charter travel. In this series, we put the spotlight on the top public and private airports for jet charter in the United States. Our featured airport in this case is Phoenix Deer Valley Airport (DVT), located in Phoenix, Arizona. Phoenix is the capital of Arizona, and also the state’s most populous city. Phoenix is a major hub of business activity in the American Southwest, and home to three Fortune 1000 companies, the Apollo Group, Avnet and Freeport McMoRan. Many web based companies have also found a home in the city, with Google, ebay, GoDaddy and others having large offices in Phoenix. Because of the often beautiful climate (other than the heat of the summer), many large events are staged in Phoenix, including a recent Super Bowl that attracted over 1,000 charter jets from all around the U.S. and world. Phoenix Deer Valley Airport (DVT) is a public airport situated about 15 miles north of the business district in Phoenix. It is designated as a reliever airport for the nearby Phoenix Sky Harbor International Airport (PHX), the largest commercial airport in the American Southwest. Deer Valley has more than 1,250 aircraft based at the airport, and data from 2004 showed more than 352,000 takeoffs and landings that year. In 2009 it was the 14th busiest general aviation airport in the United States, with aircraft movements peaking at 402,335. As a general aviation airport, Deer Valley has no scheduled airline service. The airport is home to two top flight training academies, and they (the Westwind School of Aeronautics and TransPac Aviation Academy) along with the many private charter flights that originate and arrive at the airport comprise the vast majority of aircraft movements. Airports strive for the highest levels of safety and security, and Phoenix Deer Valley Airport was honored with the very prestigious “Airport Safety Award” at the 37th Annual Aviation Safety Awards Banquet in 2009. This award is given to the airport that has made the most considerable strides in enhancing safety and efficiency. In addition to its safety and the ease and convenience of use to jet charter passengers, the airport is also a central hub of avionics repair, jet maintenance, parts and pilot resources in the region. For passengers, the airport is noted for its modern, efficient layout, the many amenities it offers to travelers and how well it is served by metropolitan transportation options. Of course you can always opt to have Stratos Jets handle all the details of your trip with luxury ground transportation waiting for you when you arrive, too. The bottom line, you will enjoy your travel experience with Stratos Jet Charters and at Phoenix Deer Valley Airport the next time you fly to the city. Because Phoenix is one of our more popular destinations, we can always find the perfect charter jet for your itinerary and at the best available pricing when traveling to and from the city. Each of our flights adheres to the highest standards of safety and security (unfortunately something many of our competitors cannot say). Our operators are fully FAA Part 135-compliant and every flight we coordinate is audited by industry leaders Wyvern or ARG/US. In very basic terms, we will only work with the very best private jet charter operators serving Phoenix. Stratos Jet Charters looks forward to the opportunity of serving you on your next flight to Phoenix and the surrounding region. To learn more about Phoenix Deer Valley Airport or the facilities found in any other destination, domestic or international, please call one of our jet charter experts today at 888 478-7286. They stand at the ready to assist you 24 hours a day, 7 days a week, and can arrange your next flight with as little as four hours notice.