Frequently Asked Questions
Thank you for submitting
Quote Request Id:
Departure:
Destination:
Arrival:
Return:
Passengers:
Thank you for your request ! Our Aircraft Charter Deptartment will follow-up with you shortlyIf urgent, call us 24x7 at (888) 593-9066
Error occured with your submission
Some of the required data which you entered is not valid!Please check all your entered data and try again.

Can I bring weed on a private jet charter?

No. Flying with marijuana is illegal. If weed on a private jet is smoked in flight, the circulating air can affect the pilots, which can impair their flying ability. This creates an unsafe environment for both the crew and the passengers. 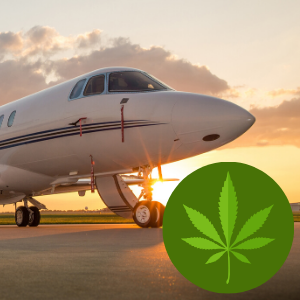 Marijuana is prohibited on all aircrafts and regulated by federal law.

As of January 2020, nearly 30 states have legalized marijuana. However, that doesn’t mean marijuana is legal on private jet charters. All public airports, airspace, and aircrafts are governed and regulated by federal law and subject to enforcement through federal law.

So what does this mean?

Passengers, pilots, and flight crew members are not legally allowed to bring or consume marijuana on commercial or private flights. This law also applies to those in possession of a medical marijuana identification card.

There is no exception to this law.

For the crew: If a crew member or pilot strongly suspects a passenger may be under the influence of drugs or alcohol, they may be refused access to the aircraft. If they suspect a passenger is in possession of marijuana or other drugs, they also have the right to refuse entry to the aircraft. A pilot or other crew member can potentially lose their license for allowing these illegal substances aboard their aircrafts.

For the passenger: Possession of marijuana on a federally regulated aircraft comes with a punishment of jail time, up to one year, and a minimum $1,000 fine for the first conviction. From there, penalties drastically increase for each subsequent offence.

Previous Cases Where Drugs Have Been Problematic

Juice WRLD: Chicago-born rapper Juice WRLD passed away due to cardiac arrest on a private jet. On that same flight, he was also found with nearly 70 pounds of marijuana stashed inside a suitcase onboard his private charter.

Justin Bieber: On a private charter from Canada to New Jersey, the captain repeatedly asked Bieber and his passengers to refrain from smoking marijuana in flight. This forced the pilots and crew to don oxygen masks for the duration of the flight. Customs and Border Patrol, along with DEA, were waiting on the tarmac when the plane landed.

Lil Wayne: When rapper Lil Wayne touched down at Miami Opa Locka Executive Airport, federal agents were awaiting his arrival due to a tip they received about the rapper. After a search of his private jet, numerous drugs were found among his possessions.

While these cases have been heavily reported on in the news, there are plenty of charters that aren’t. When flying on a private charter, it’s best to leave all illegal substances at home. It’s not worth the risk.

Can I smoke on a private jet?

You can smoke tobacco on a private jet if you own it or you have permission from the aircraft owner and it follows FAA regulations for passenger and crew compartment interiors. You’ll want to make sure the aircraft is equipped with a suitable number of removable ashtrays and signage that states where smoking is not allowed.

When chartering a private jet, be sure to ask your private flight advisor if smoking is allowed on the aircraft you’ve booked before lighting up inflight.

Can you smoke on your own private jet?

Of course. If you own the aircraft, you can smoke as much tobacco as you want. However, smoking weed is still illegal, even if you own the jet.

Can I vape on a private jet?

Yes, but only if smoking is permitted on the private jet you’ve booked for a charter flight. Vapes contain lithium batteries that pose a fire risk and should be handled with caution throughout the flight. We discourage stowing electronic cigarettes in the storage compartment and ask that they are brought into the cabin instead so you can keep an eye on it and make sure it doesn’t accidentally turn on.

Can you smoke while flying?

Do your bags get checked on a private jet?

Not in the traditional sense. You can bring your bags directly onto your private jet when you board. If you prefer to stow your bags away, crew members will place them in storage compartments while you make your way inside the waiting aircraft.