A hefty ticket price. A delayed – or even canceled – flight. Long lines at security and no empty seats at the gate. The challenges of commercial air travel can frustrate the most patient of passengers, even before they reach cruising altitude. We decided to investigate these common airport hassles to gauge the strengths and weaknesses of various airports and airlines. Using data from the Bureau of Transportation Statistics, we compiled stats on flight delays and cancellations, ticket prices, and airport crowds, along with overall airline rankings. Fasten your seatbelt, return your tray table to its locked position, and check out our fascinating findings below. From security issues to inclement weather, maintenance issues to tardy arrival flights – the reasons that lead to flight delays are as varied as they are frustrating. The map above plots the states with the lowest and highest rates of punctual takeoffs. A quick glance reveals that airports in the eastern half of the country struggle with punctuality more so than states in the Northwestern region. The best state for on-time flights is Hawaii, where more than 89% of takeoffs are punctual. Utah (more than 86%), Montana (almost 85%), Alaska (around 84%), and Washington (almost 84%) are also good bets for on-time travel. If you’re in a big hurry, you may want to steer clear of our last-place state for on-time departures: Delaware, where only about 66% of flights take off on time. New Jersey and New York didn’t fare much better (around 72%), and New Hampshire and Iowa hovered around a 72% punctuality rate as well. Overall, around four out of five flights depart on time, but a variety of factors cause airport delays to the rest. Nearly 7 percent of delays are caused by an arriving aircraft’s late arrival, and almost 6 percent are due to an air carrier delay – for instance, crew or maintenance issues, aircraft cleaning, or baggage loading. A National Aviation System delay (for instance,  non-extreme weather conditions or air traffic control issues) prompts delays in more than 5 percent of flights. Canceled and diverted flights and extreme weather account for very few delays – combined, only around 2 percent of flights. So how should you handle a flight cancellation? Contrary to popular belief, your airline does not legally owe you lodging or even a food stipend if you’re stranded at the airport due to a flight cancellation or delay; although depending on the situation, it’s a possibility for some. Travelers who can’t take the risk of a delayed or canceled flight may want to consider avoiding commercial air travel all together and chartering a private jet. For business or leisure, a private jet charter can afford you flexibility in flight changes and no hassle of crowds or long security lines, as well as luxuries such as catered meals. Everyone wants a good deal on airline tickets. After all, flying isn’t a budget-friendly mode of travel by any stretch – and even when fares go down, extras such as baggage fees and flight-change costs can make up the difference. But surveying ticket prices across the country, based on departure location, reveals a huge variation. Delaware is home to the best bargains – ticket prices average less than $200. New Jersey and Utah both come in below the $300 mark, and other budget-friendly states (with costs in the low $300 range) include Maryland, Hawaii, New Hampshire, and Ohio. In high-priced Alaska, tickets average more than $670 apiece. Virginia surpasses the $500 mark in addition to a handful of states including Alabama, Nebraska, Missouri, South Dakota, and Wyoming. “Ladies and gentlemen, we have to inform you that this flight has been canceled.” This announcement is sometimes enough to bring weary travelers to their breaking points. We ranked airports in order of flight cancellation rates: Chicago O’Hare International Airport came in first, followed by Dallas/Fort Worth International Airport and LaGuardia Airport in New York. This news may not surprise frequent flyers: Last year, O’Hare managed the impressive task of handling more flights than any other airport in the world, but that doesn’t stop people from suggesting improvements – from more gates to improved air-traffic control. LaGuardia has drawn criticism from various sources – including Vice President Joe Biden, who compared it to a third-world country. Dallas/Fort Worth is trying to woo would-be travelers by rebranding as a “superhub.” So when do most of these flight cancellations occur? It turns out people have another reason to dislike Monday – already this year, more than 17,000 Monday flights have been canceled. Fridays and Saturdays see the fewest cancellations, with around 6,600 cancellations apiece on those days. 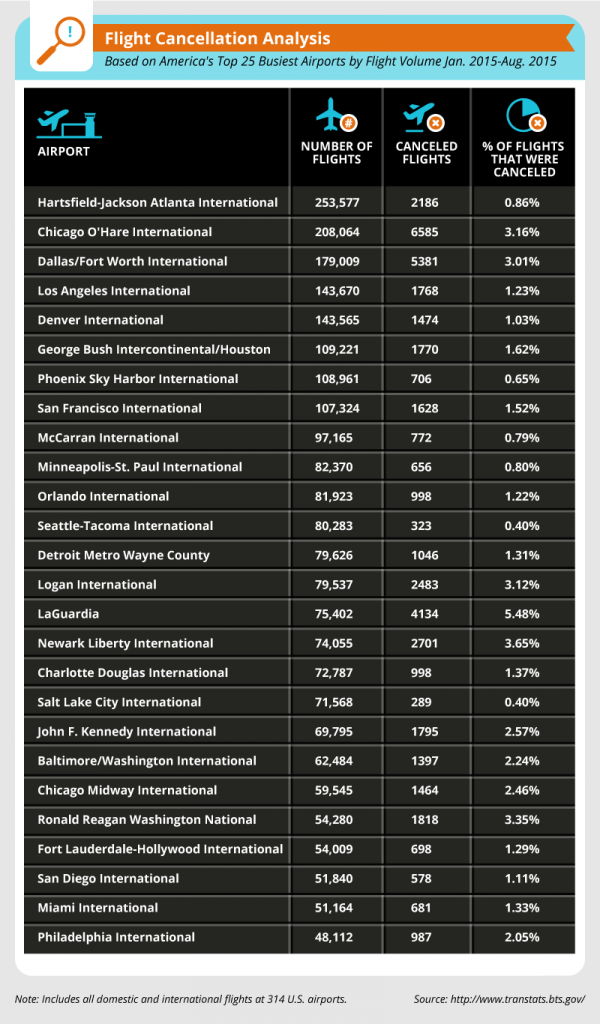