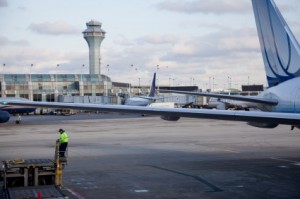 Opened last May with $5.3 million from the federal government, the 106-foot tall control tower at Frederick Municipal Airport in Maryland may soon shut its doors. The stimulus package, a law enacted in 2009 from President Obama in an attempt to jump-start the economy, provided Frederick with its new tower. Forced spending cuts, which went into effect March 1, are now threatening to shut it down.

In total FAA says 173 air traffic control towers will be closed by April 7, and altogether 238 towers are on the chopping block due to these budget cuts. Like the one at Frederick Memorial, many of these towers have just opened, often at significant government expense and which required the personal sacrifices of their employees to accept positions there.

The FAA says it is facing an untenable situation because of the congressional mandate. It must cut nearly $600 million from its $48 billion budget this fiscal year. Because the majority of its 47,000 employees are air traffic controllers, it is impossible to cut its budget without affecting controllers, says the agency. We cannot go into full detail here, but these across the board budget cuts on every Department “enforced without any thought of actual needs or ranked in order of significance” is very misguided. Though we at Stratos Jets agree that significant cuts to federal programs are necessary, this “blind” approach to achieving cost savings is suboptimal to say the least.

The FAA is thus furloughing employees, eliminating midnight shifts at some control towers and reducing maintenance on “non-critical” facilities. In an effort to affect the fewest travelers, the FAA said closures are targeting lower-volume airports, those with fewer than 150,000 operations a year (a takeoff or landing is an operation) and fewer than 10,000 commercial flights. This means the most immediate impact will be on non-commercial flights, such as private jet charters.

The FAA said it will manage the system by reducing volume, not reducing safety. But controllers and other industry groups like the Aircraft Owners and Pilots Association strongly disagree. Controllers say closing the towers will obviously eliminate one layer of safety “the extra set of eyes in the tower” while contributing to the workload at other FAA towers, which will themselves be affected by furloughs. These furloughs at major airports could also result in significant issues in large cities like New York, Los Angeles and Chicago, where additional delays of up to 90 minutes for commercial flights during peak hours could ripple across the country.

We should say here that closing towers does NOT in any way mean closing these airports. Privately owned aircraft and charter jets can utilize a large number of FAA facilities nationwide without tower closures, or can use a common radio frequency to announce their intentions to takeoff or land at facilities that no longer have operational ATC towers. Airports can also request their towers stay open if use by military and medical flights, or their roles as “reliever airports”, are seen as having national significance. How many of these requests are granted remains to be seen.

At Stratos Jet Charters we believe that closing towers that were built with millions of dollars of stimulus money, and have opened in some cases just a few short months ago, will adversely affect hard working FAA employees and could have the potential for tragic consequences. Our clients at Stratos Jets know that jet charter safety is our top priority, every day on every flight. That’s why we require that the Captain of every flight we charter is ATP-rated, the highest level of pilot licensing, representing the most well-experienced and trained pilots in the nation. That’s also why we require that every domestic jet charter flight we broker is audited by leading third-party auditors Wyvern and ARG/US, the most stringent standards for flying safety. Unlike some competitors, we would also never work with an operator that was not fully-compliant with Part 135. The safe, secure and comfortable flying of our clients is something we take very seriously.

As always, in our role as a leader in the jet charter industry we will work to keep you informed and up-to-date on this issue and all others that might affect you as a jet charter consumer. As a strong advocate for business aviation and individuals who travel via private jet charter, we will always do whatever we can to represent your interests and those of our valued partners.

Regarding these changes we will work with our aircraft operator partners and their flight crews, to ensure the safe and secure travels of every one of our invaluable clients. We will do whatever we can together with our partners to mitigate any potential negative effects that these tower closures might have on you, your loved ones and overall traveling party.

When planning your next charter flight, call one of our experienced private flight advisors at Stratos Jet Charters at (888) 593-9066 to provide you with a quote on your itinerary and to arrange your private flight. We promise the best available jet charter prices on the safest, most well maintained aircraft for your charter flight itinerary. We’re available to you 24 hours a day, 7 days a week, and can arrange your private flight with as little as four hours notice.