Can You Carry Hoverboards on Private Jets?

One of this year’s must-have holiday gifts has received a bumpy ride on  private jets and commercial airlines. In fact, Hoverboards, a new form of high-tech balancing scooters, have been grounded altogether by more than 60 commercial airlines as well as many private jet companies due to safety concerns. There have been an increasing number of widely publicized incidents of hoverboards spontaneously catching fire. One such incident gained national headlines when one of the scooters was recorded on a cell phone video burning in a mall in Washington State. Given the potential safety issues, many commercial airlines have banned these gadgets outright, both in checked luggage and carry-on. Some of the major U.S. airlines joining the ban include:

There is also a considerable list of international airlines and private jet operators that have made the decision to ban hoverboards in the interest of passenger safety.

The safety concern centers on the high-Watt lithium batteries used by these scooters. When both ends of these batteries come in contact with metal objects (coins, tools or keys), it can cause extreme heat and even lead to a fire. Should that happen during a flight, the results could be catastrophic. Whether it was in a luggage compartment or in-cabin, it would be difficult to contain a fire once it started. Here’s what the Federal Aviation Administration (FAA) Pack Safe site has to say: 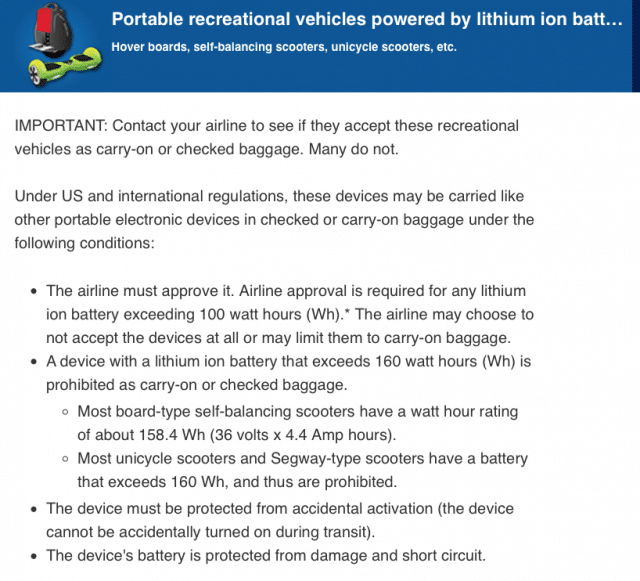 It should be noted that lithium batteries are commonly found in many everyday electronics, such as:

However, these devices use low-Wattage lithium batteries, as they only require a fraction of the power to operate compared to a hoverboard, and they are all removable. They are all accepted by current FAA  regulations for both commercial airlines and business jets.

While there are many reputable hoverboard brands that make quality products, there are also a number of knockoff brands that are cheaply made and fail to adhere to government regulations in terms of battery power. Versions made using substandard components and production methods could pose an increased safety risk. However, regardless of who makes your hoverboard, most airlines and jet operators aren’t willing to take the risk of an onboard explosion.

While charter jet companies strive to be as accommodating as possible to their clients, passenger safety and operator safety restrictions takes precedence when issues like hoverboards arise. Whether you fly commercially or you prefer the convenience and comfort of flying on luxury private jets, the FAA regulations are in place for your wellbeing. Are you looking for an air charter service that obsesses over passenger safety? Stratos Jets charters business jets using its in-house due diligence safety program to prescreen all aircraft and operators that we work with. Book a flight or learn more—(888) 593-9066 (toll free) or request a quote online.