If you frequently fly on jet charters, you’ve probably visited your fair share of airports. You’ve likely also noticed that many are named after the cities in which they’re located. Others bear the names of historical figures, many of who have slipped from memory. In this article, we’ll try to reacquaint you with one such individual: Brigadier General William “Billy” Mitchell, for whom the General Mitchell International Airport (MKE) in Milwaukee is named.

As you’d expect, Mitchell (1879-1936) grew up in the Wisconsin capital and has a deep connection with aviation. The son of a US senator for Wisconsin (John Lendrum Mitchell), Billy is often referred to as ‘the father of the United States Air Force.’

An Ace in the Sky

Mitchell first came to prominence as a flying ace in World War I. During the lead-up to

the war in Europe, he began to realize how aviation could gain the US military an important tactical advantage. He felt so strongly about this that he learned to fly at his own expense and quickly worked his way up the US Army’s then-fledgling aviation department.

After continuously demonstrating his skill and tireless determination, Mitchell eventually assumed command of all American air units in France. By the war’s end, he was appointed Chief of Air Service of the First Army, and later, Director of Military Aeronautics.

Mitchell’s firm belief that military aviation should be given increased priority landed him trouble with a number of higher-ranking officers, particularly those in the US Army and Navy. His criticism of traditional ideologies eventually led to a court-martial in 1925 where he was found guilty of insubordination and was demoted.

Disgruntled, he resigned from the service the following year, however, Mitchell continued to champion the importance of aviation superiority in the military until his death in 1936. 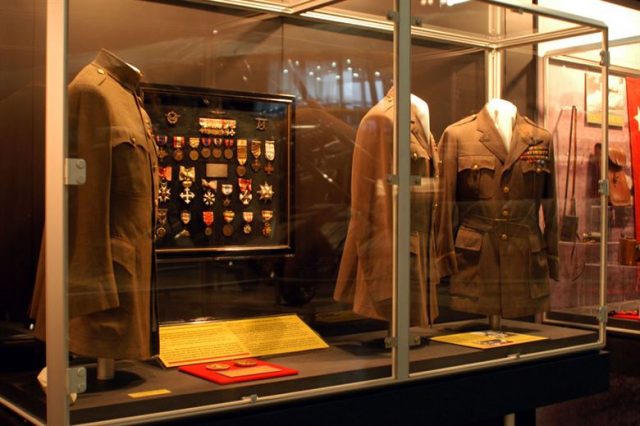 Billy Mitchell’s uniform at the Mitchell Gallery of Flight, located in the General Mitchell International Airport in Milwaukee.

General Mitchell is the primary airport serving Milwaukee and surrounding area. It’s also a popular arrival point for travelers heading to the northern suburbs of Chicago. However, for those flying on jet charters to Milwaukee, Timmerman Airport (MWC) is often the preferred choice.

General Mitchell International Airport serves roughly 10 million passengers a year. In addition to serving as the home of the Mitchell Gallery of Flight aviation museum, it also features all of the services and amenities you’d expect, including:

If you’re interested in the history of other airports, check out our post: The Real McCoy Airport: A Jet Charters’ History of Two Orlando Airport Codes.

To arrange jet charters to Milwaukee and other cities across the United States, talk to a Stratos Jets air charter associate by calling 888-593-9066.