How Does GPS Work on Private Jet Charters?

Anyone who has flown commercially has seen the air tracker on that little screen attached to the seat in front of them. The tracker uses GPS, or the global transitioning system, to show your plane’s position, speed and altitude while on ground and in flight. GPS technology has been an important tool not only for commercial and recreational flyers, but also for private jet charters.

How does GPS work?

GPS is a multi-use, space-based radio-navigation system owned by the U.S. government and operated by the United States Air Force. It uses satellites to pinpoint a three-dimensional position (longitude, latitude and altitude) anywhere on Earth, including airspace. GPS tracking is very accurate. It can pinpoint a position up to a meter of accuracy and can provide precise time, and speed, up to a nano-second anywhere on Earth. Known as a modern navigational aid (navaid), the GPS used in aircraft is the same as the GPS used in most modern cars today as well as in our smartphones and watches. Aircraft, including private jet charters, use GPS to show pilots their position on a map. However, the majority of air traffic control centers still use radar-based technology to track a plane’s positioning.

How do private jet charters benefit from GPS? 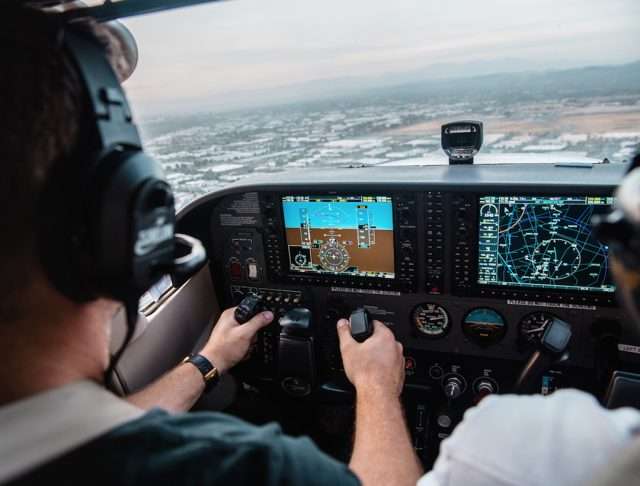 GPS, now considered the most accurate navigational tool, is becoming more and more mainstream in the private jet charter industry.

GPS is now used around the world by the aviation industry as it is considered to be the most accurate and safest way to track aircraft and airspace traffic, from departure, en-route, and arrival. Constantly being improved and modernized, with more satellites being sent to space, GPS is often used as part of an area navigation (RNAV) system, the method of navigation that allows the aircraft to operate on a desired flight path without depending on ground-based navigational aids (such as radar) or surveillance equipment. This benefits private jet charters flying to more remote locations and smaller airports. Other benefits include:

Flight operators who use GPS as part of their navigational aids have noted reductions in flight times, operational costs, and most importantly, GPS is known to improve safety.

Get ready for the NextGen of air travel

As part of its overhaul of the aviation industry throughout the United States, the Federal Aviation Administration (FAA) has spearheaded the new National Airspace System known as Next Generation Air Transportation System, or NextGen. One of the targets of NextGen is to move the aviation industry into the 21st century with its replacement of radar-based technology on the ground with GPS. This will allow air traffic controllers to get more precise aircraft information and will increase the safety for all carriers, including private jet charters. To read more on how the aviation industry is moving forwards on safety, read our blog  What Role Pilots Have in Jet Charter Safety. As a private jet charter provider, Stratos Jets connects its clients with state-of-the-art aircraft and trained personnel who utilize the most modern and safest navigational aids such as GPS. Contact us for all your flying needs.