Regardless of your political beliefs and stance on Trump’s executive order titled, “Protecting the Nation from Foreign Terrorist Entry into the United States,” it’s easy to see the controversy it’s caused on Twitter. Thousands of people are flocking online to share their opinion about the United States’ 45th president, Donald J. Trump, and his border and immigration policies. We analyzed tweets about his travel ban to help you better understand how the conversation is unfolding on social media. What is being said? And how is the government reacting to this issue? Continue reading to see what we discovered. 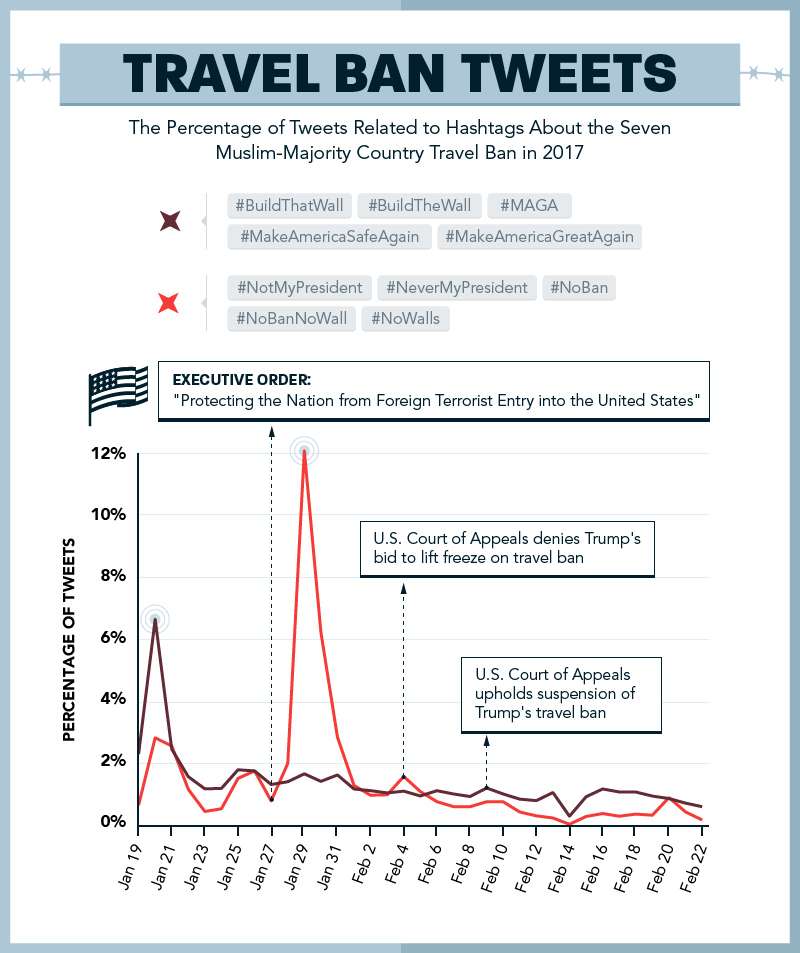 Tweets using hashtags favorable to Trump’s policies peaked on Jan. 20, 2017 – Inauguration Day. Until Feb. 21, 2017, this was the largest day on Twitter for posts containing hashtags focused on border security, such as #BuildThatWall. Close to 7 percent of these tweets came on a day when inauguration crowd size was questioned, and supporters of America’s new CEO were emboldened by his promise to #MakeAmericaGreatAgain. Those who shared messages in opposition to the new president – through tweets containing hashtags like #NotMyPresident or #NeverMyPresident – were noticeably quieter on Inauguration Day. While less than 3 percent of these tweets appeared on January 20, there was a roar of activity after Trump’s executive order, “Protecting the Nation from Foreign Terrorist Entry into the United States,” was signed just over a week later. On Jan. 30, 2017, 12 percent of tweets containing #NoBan, #NoBanNoWall, and #NoWalls were shared via Twitter. The protests weren’t just online; they also took place at airports across the country. 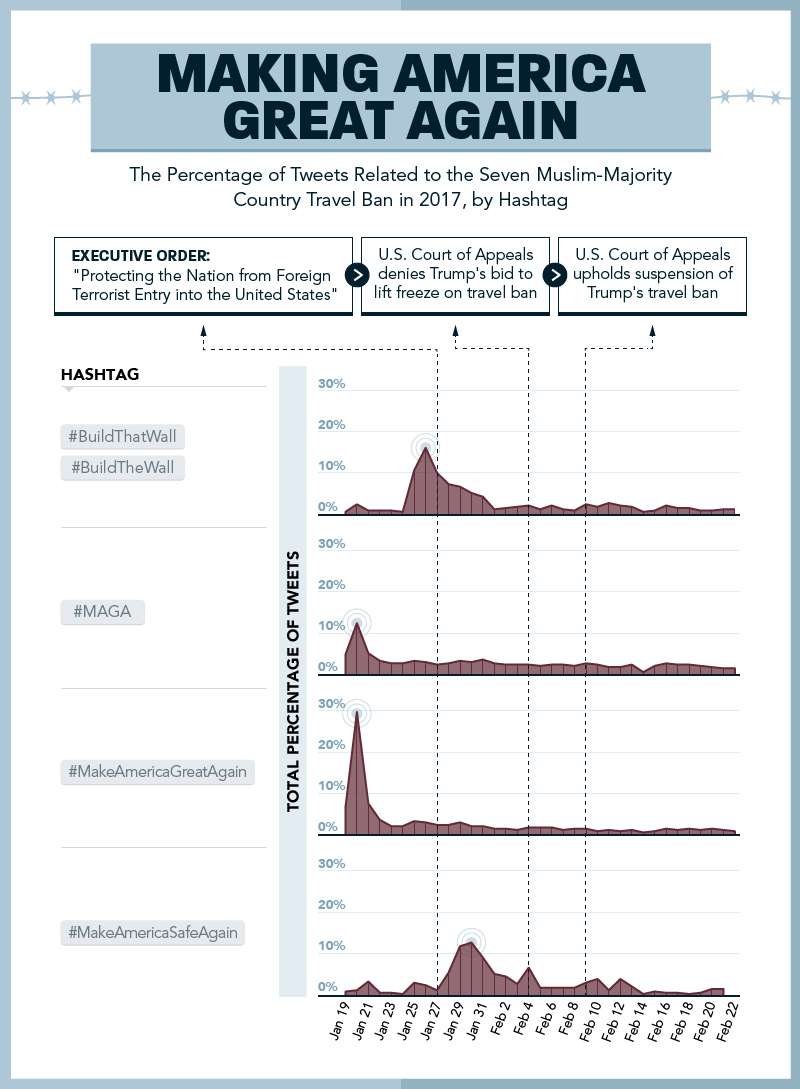 Once just a statement on a white trucker hat with black text, the phrase “Make America Great Again” became Trump’s rally cry and campaign motto. In fact, 30 percent of tweets analyzed using this hashtag were shared on Inauguration Day. His supporters co-opted this phrase and turned it into a different message, #MakeAmericaSafeAgain, most prevalently used on January 29-30. It existed as social media counter to the large number of demonstrations in opposition to Trump’s executive order preventing individuals from certain Muslim countries from entering the U.S. This was the only hashtag that saw notable activity on three other pivotal dates: February 4, 10, and 12. These dates fell on and near to when the U.S. Court of Appeals for the Ninth Circuit rejected the Department of Justice’s initial request to unfreeze the ban, and their subsequent denial to reinstate it in a 3-0 decision. 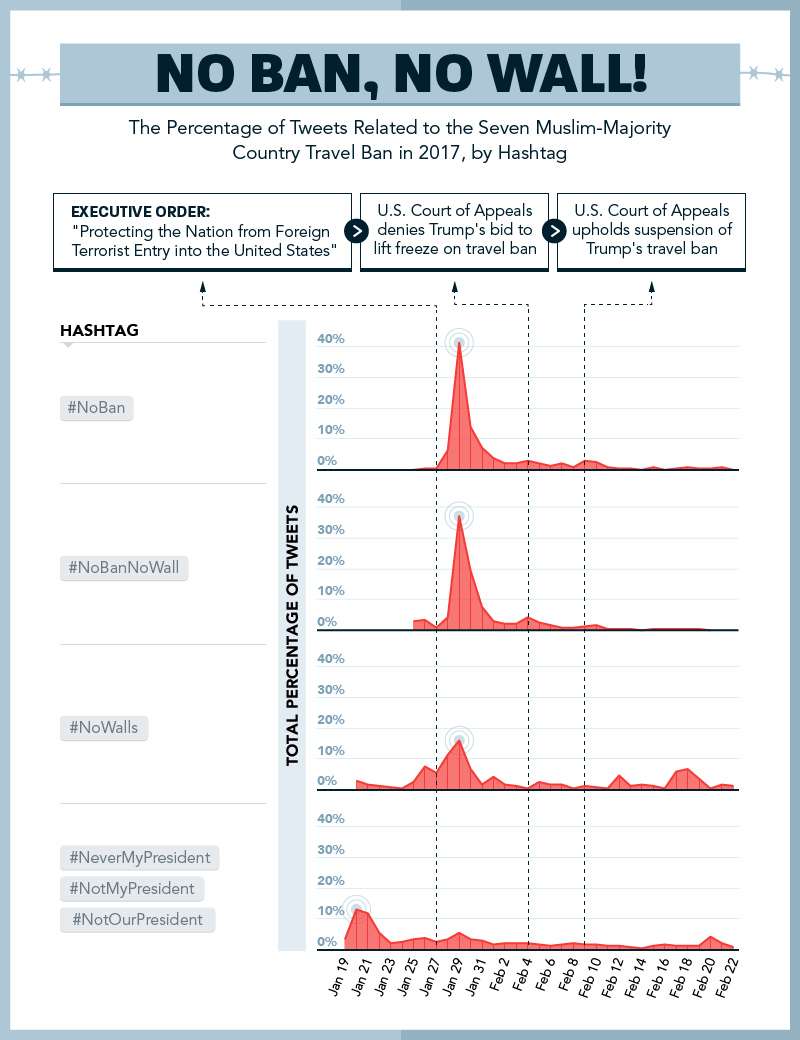 Over 40 percent of tweets containing #NoBan and more than 35 percent using the hashtag #NoBanNoWall were shared on January 29, which served as a day of national protest for those opposed to Trump’s ban. Whether it took place at airport terminals – John F. Kennedy International, Los Angeles International Airport, Hartsfield-Jackson Atlanta International, to name a few – or in city centers, there were in-person activities to accompany the virtual demonstrations. Even the involvement of the federal appeals court didn’t cause a spike in the usage of either of these hashtags. The #NoWalls tag saw a spike in usage on February 17 after it was reported there would be a mobilization of the National Guard to round up undocumented immigrants. Almost 13 percent of tweets containing this hashtag were posted on February 17-18. 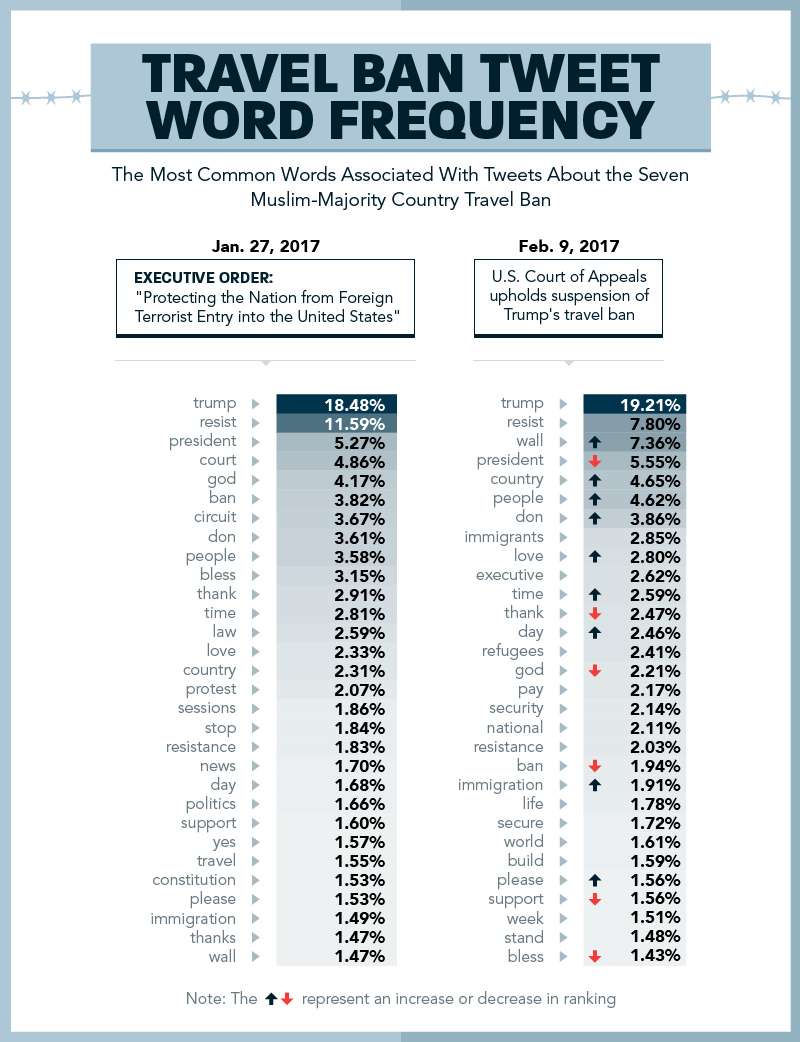 In the two most critical three-day spans surrounding the travel ban related to visitors from seven Muslim-majority countries – January 26-28 and February 8-10 – one common word stood out in the tweets analyzed: Trump. The president’s name appeared in just shy of 20 percent of tweets over these six days. However, a common theme persisted much like the political and legal opposition to his policy: resistance. During the announcement of the executive order, over 10 percent of tweets featured #resist. When the U.S. Court of Appeals finalized its decision, almost 8 percent of tweets featured this message of disapproval.

At StratosJets.com, we believe in the right to soar higher. With a focus on guest safety through extreme diligence, unparalleled flexibility coordinating trips with as little as four hours notice, and a choice between multiple types of aircraft, we have refined the chartered flight experience. Our company exists to serve all clients and expand their margin of safety, regardless of where they come from or where they’re going. Call us toll-free at 1-888-593-9066 to speak to any one of our charter jet specialists 24/7 and experience air travel as it should be.

Help your readers keep up to date on our political climate by sharing our content for noncommercial purposes only. Just make sure to give proper credit to our authors by linking to this page.