For decades, travel has been the common leisure activity among generations looking to enrich their lives through unforgettable landscapes and experiences. So how exactly do we choose where to travel? It’s quite simple. The majority of travelers tend to explore countries and cities with the most jaw-dropping sights, fascinating cultures, and safest streets. Even though a breathtaking view might be on your bucket list, ensuring the safety of you and your loved ones is a must when exploring. Are you traveling somewhere that is as safe as you think? Is there a possibility you’re missing out on that trip of a lifetime because you believe a destination is too dangerous? We surveyed 2,000 people about their safety perceptions of 30 cities around the globe. These perceptions were then compared to crime data for each city analyzed. Take a look at what we found. 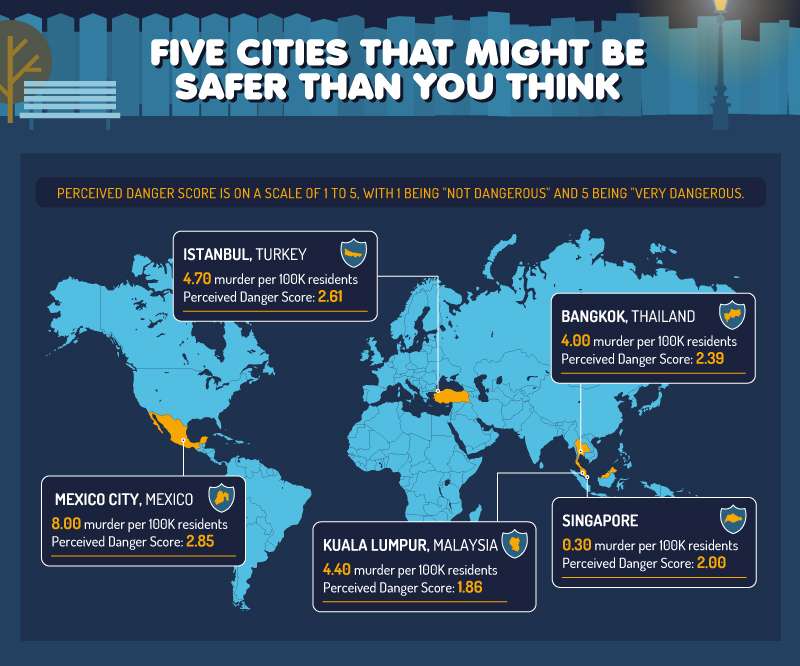 A generation of movies and mainstream media has led people to believe cities are inherently dangerous places, riddled with poverty, crime, and high rates of murder. According to studies, however, the opposite is true – the risk of death by injury is 22 percent higher in rural regions compared to urban areas. Even with concrete data, travelers across the globe remain faithful to their convictions on which cities they perceive as most dangerous. The reality is that some of these so-called “deadly destinations” are a lot safer than you may think. While each traveler’s perception may differ, we offered participants the chance to rate the perceived danger levels of each city on a scale of 1 to 5. Our results show that Mexico City, Mexico – the most populated city in the country – is recognized as dangerous, with a perceived danger score of 2.85. Don’t panic just yet; you can still enjoy some tequila in the sun. The nation’s capital, by distancing itself from high drug activity in the surrounding regions, has become a haven for natives and travelers alike. It only has eight murders per 100,000 people. If you’ve seen the movie “Pirates of the Caribbean: At World’s End,” then you may be inclined to think Singapore is riddled with swashbuckling thieves looking for a scallywag to start trouble with, but don’t let this film sway you from sailing through Southeast Asia. In fact, Singapore has some of the lowest crime rates in the world – take that Captain Sparrow! 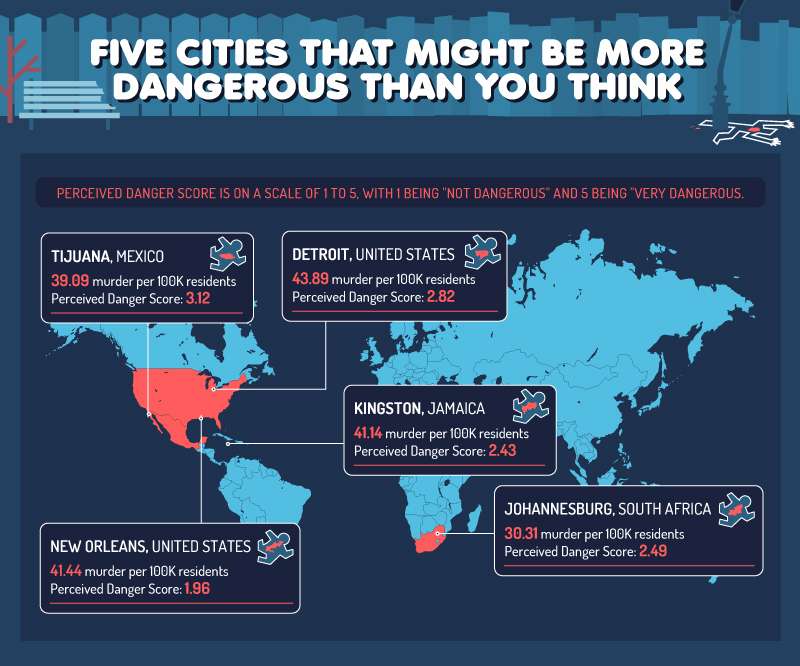 Detroit – once known for its booming automobile industry – is now known as one of the most dangerous cities in North America. Although the murder rate runs high (nearly 44 murders per 100,000 people), investments are currently being made to transform Detroit back into the premier destination it once was. Some of the more shocking findings from our survey stem from The Big Easy: New Orleans, Louisiana. Between Mardi Gras celebrations and exploring the French Quarter, NOLA sure knows how to attract tourists from all parts of the globe. It appears, though, these party pathfinders show no fear. The city was given a 1.96 danger score, with more than 41 murders occurring per 100,000 people. 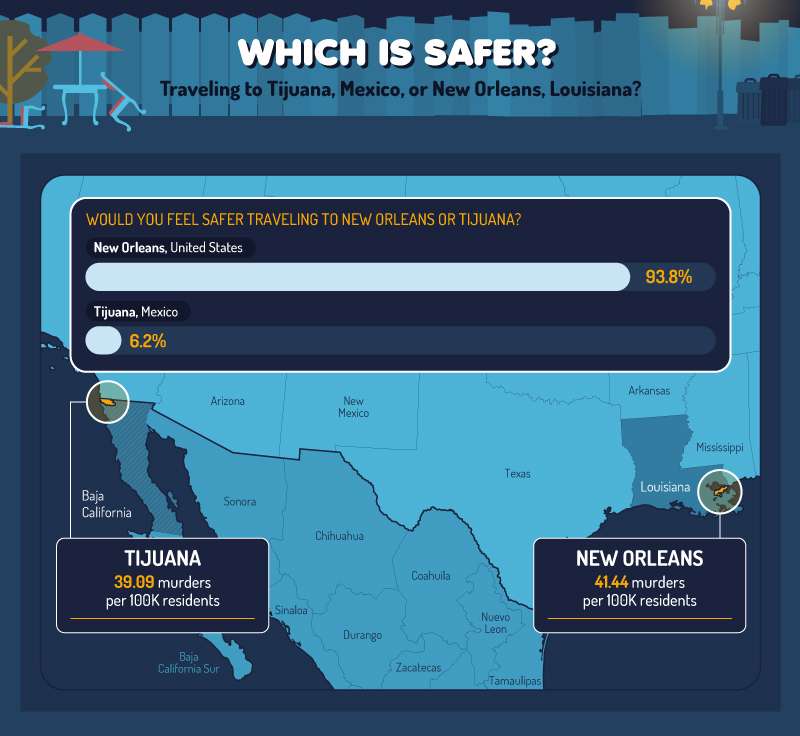 Nearly 94 percent of participants surveyed feel safer traveling to New Orleans, Louisiana, over Tijuana, Mexico. However, New Orleans has one of the highest murder rates per capita in the U.S. (more than 41 murders per 100,000 residents), while Tijuana – a city in Mexico that borders the edge of California – cites roughly 39 murders on the same scale. You may wonder: What exactly is clouding people’s judgment? Mexico is notorious for its drug cartels constantly making headlines, which may strike a sense of doubt in the average wanderer looking for a scene with a vibrant nightlife. The reality is, tourists are rarely ever the targets of crimes beyond petty theft.

Why Are Cities Perceived Dangerous?

What are the biggest influencers when it comes to feeling a city is unsafe? And what parts of these bustling cities do wayfarers feel most safe in? Our respondents agreed on one thing: The news has the largest influence on where they feel safe. When it comes to exploring the cityscape, respondents feel certain areas of town are safer than others. The results show that public parks or green space, such as open fields, are often thought of as the safest spots in a city. As American cities become revitalized, a new wave of excitement has been sparked in residents and tourists. If you can’t make it to a public park, have no fear. Sidewalks are also viewed as safe spots among common commuters, which makes sense considering they’re paved with a purpose: to prevent pedestrian danger. If there’s one thing to take away from these results, it should be to avoid dark alleyways at all costs! But this safety perception isn’t necessarily true. In fact, new research explores how crime rates do not increase in spots with reduced light. The results describe how people simply just feel safer in well-lit areas across town.

We all know how the saying goes: “Your perception is your reality.” This time around, we compared respondents’ perceptions of city danger with the murder rate of each location. The results show that travelers are more afraid than they should be – with factors, such as emergency response systems and poverty rates also being considered while planning their journey. According to the data, Tijuana, Mexico, had a danger score of 3.12. However, it has 39 murders per 100,000 residents. Pereira, Colombia, appeared to share the same fate since travelers viewed the city as one to skip, rating it nearly a 3. In fact, Pereira has a lower murder rate (less than 33 murders) than Detroit (nearly 44 murders) and New Orleans (around 41 murders). It’s possible that media, like Netflix’s “Narcos,” are altering the perception of Colombia as the show explores the dubious acts of infamous drug lord Pablo Escobar. On the other end of the spectrum, New Orleans – “The City That Care Forgot” – and Kingston, the capital of Jamaica, were perceived as safer than they are.

You know what they say – the more you travel, the more you know! There’s no doubt seasoned travelers have better insights on the ins and outs of cities. Frequent fliers who take flights over 10 times a year ranked the average city with a safety score of 3.13, perceiving populated cities as safety zones. On the other hand, travelers who haven’t traveled anywhere in the U.S. in the past year gave the average city a safety score of 2.98. Although the difference seems minor, the results acknowledge a gradual increase in safety score based on how well-traveled a person is. This shows that what we perceive is what we believe. If your perceptions don’t expand past your hometown, then you may view the world as a more dangerous place than it is.

The next time you have the sudden urge to satisfy your wanderlust, research the culture and crime statistics of your target destination. Stratos Jet Charters puts safety first, which is why we strive to provide secure passage no matter where you want to fly.