Sometimes, you just have to fly commercial. Maybe there’s just one of you, and it’s an international flight. Well, that doesn’t mean you have to sacrifice all the luxuries of flying on private jets. Introducing fifth freedom flights.

What is a fifth freedom flight?

A fifth freedom flight, in the language of the aviation world, is the ability of a foreign airline from Country A to pick up passengers in Country B during a leg of its journey from Country A to Country C (or vice versa), and drop them off. The Chicago Convention on International Civil Aviation, established in 1944 to regulate international airspace, outlines the freedoms of the air, including the fifth of nine freedoms: “commercial aviation rights granting a country’s airlines the privilege to enter and land in another country’s airspace” (source: Wikipedia). What does the fifth of those nine freedoms of the air mean for you? In short, it means you can get picked up in the United States by a carrier that’s not American so you can travel to a foreign (not domestic) destination on an often superior aircraft with superior service.

What are some examples of popular fifth freedom flights?

The Forward Cabin has an extensive list of known and common fifth freedom flight routes, but here’s a sampling of some popular trips from American cities:

It might sound funny to think of yourself hopping aboard Ethiopian Airlines in Los Angeles on your way to Dublin, Ireland, but by now you’re probably getting a sense of how it works and why travelers who can’t make private jets quite work will take advantage of fifth freedom flights. (And, of course, there are plenty of fifth freedom opportunities for connections in cities outside the United States.)

What are the benefits?

So, why would you fly on Ethiopian Airlines to Dublin instead of on United, for example? 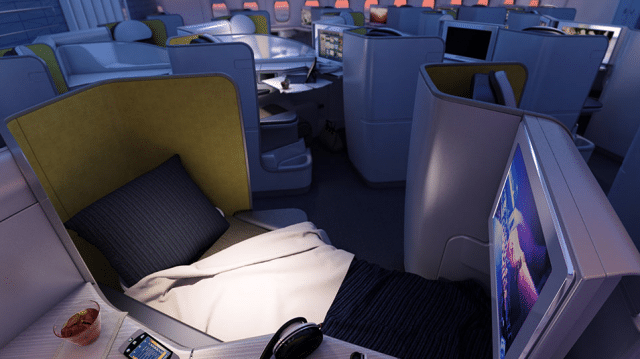 For example, on that Cathay Pacific flight from New York JFK to Vancouver, you’re flying on a Boeing 777(featuring arguably the world’s most powerful jet engines and an elegant interior design, including twin aisles with spacious bins, dynamic LED coloured lighting and more. Whereas the Delta or WestJet flight, you’d be taking a Boeing 717 or a Boeing 737, respectively. Still reliable and wonderful aircraft. Just smaller and less luxurious.

On these long-haul flights you’re connecting on part-way, flight attendants are often highly trained, experienced and top-notch at delivering outstanding experiences. The extras you expect—good food and drink—are included. As you well know, for this service alone it’s worth a few extra dollars.

How do you find fifth freedom flights?

Of course, our good friend Google comes to the rescue. Instead of searching your preferred commercial airline’s flights, search in reverse in the Google search engine by typing city and/or airport code of departure and arrival city. Let’s go back to that New York JFK to Vancouver flight. 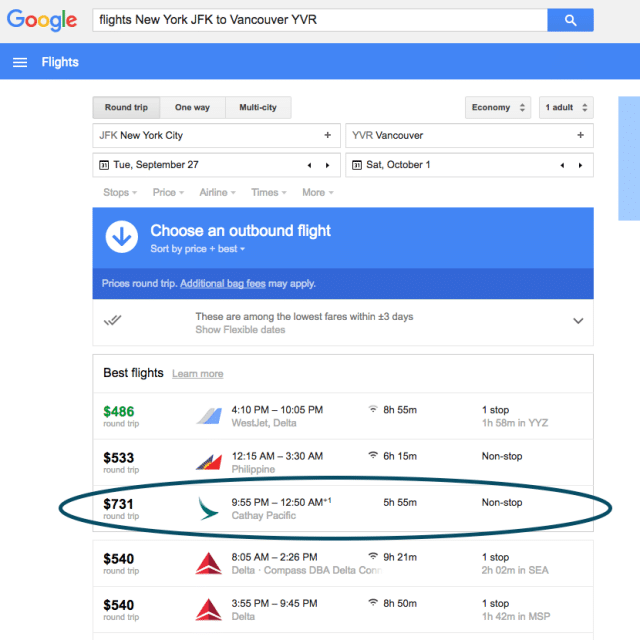 As you can see, the fifth freedom Cathay Pacific flight is a bit more money, but we’re after the best flight, not the cheapest, right? When you’re looking for the ultimate in convenience, safety and travel experiences, chartering private jets through Stratos is the way to go. Travel when and where you want to go with vendors that meet our safety standards—the highest in the industry—and a trip support team to take care of all the details. Charter your jet. Call 888-593-9066.