Flying For Our Futures

For reasons relating as much to their profits as the planet, America’s major airlines are reconsidering how much fuel they burn on each flight. As jet fuel prices rise more rapidly than demand for seats, carriers have been forced to hike rates and restrict their flight schedules. Additionally, new international agreements are poised to come into effect in the coming years, forcing airlines to explore sustainable alternatives to their current fossil fuel consumption. In fiscal and regulatory terms, improved efficiency is imperative for the industry. But there may be another reason for airlines to adopt environmentally conscious practices: public opinion. Recent years have seen a surge in consumer support for fuel-efficient automobiles, but does the public have equivalent expectations for air travel? We set out to find the answer. In this project, we gathered government data related to fuel efficiency and passenger volume for America’s 10 largest airlines, studying the efficiency records of the biggest names in air travel. We then surveyed 1,000 individuals about their environmental attitudes regarding air travel and whether they’d be willing to pay for more sustainable flights. Our findings present demographic differences in concerns about airlines’ carbon footprints, as well as ideological contrasts across the political spectrum. To learn how environmental concerns stack up against travelers’ other priorities, keep reading. 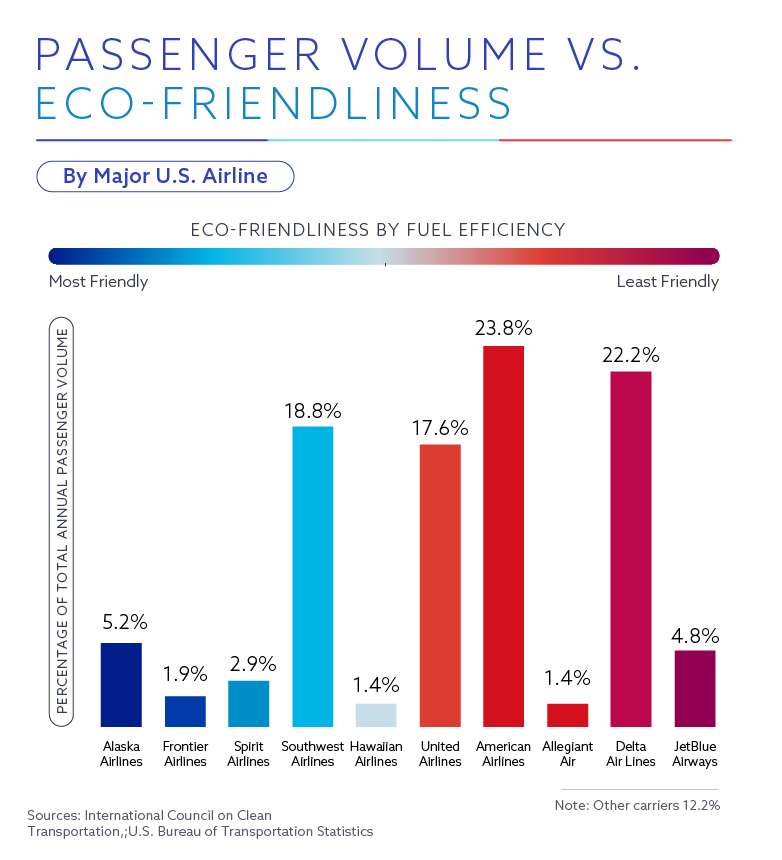 Our findings suggest that market share and fuel efficiency rarely coincide: Many of the airlines Americans fly most frequently are among the least environmentally friendly. American Airlines (the country’s most popular carrier) and Delta are emblematic of this trend, although these companies have invested in newer, more efficient aircraft in recent years. Southwest Airlines provides an interesting counterexample, however, serving nearly 19 percent of all passengers while maintaining a relatively strong efficiency record. The company aims to continue this balancing act by adding more fuel-efficient Boeing 737 Max aircraft to its fleet in the years to come. Smaller airlines have a mixed record on efficiency. Alaska Airlines and JetBlue serve a similar proportion of flyers each year, yet they could hardly be more different in terms of environmental impact. In fact, Alaska Airlines has been hailed as a model for sustainability in the industry: The carrier is consistently profitable, proving that paying attention to emissions can be good business. Conversely, JetBlue ranked dead last among the carriers studied. Interestingly, the company’s founder has recently formed another airline startup, and his business plan hinges on operating more fuel-efficient jets. 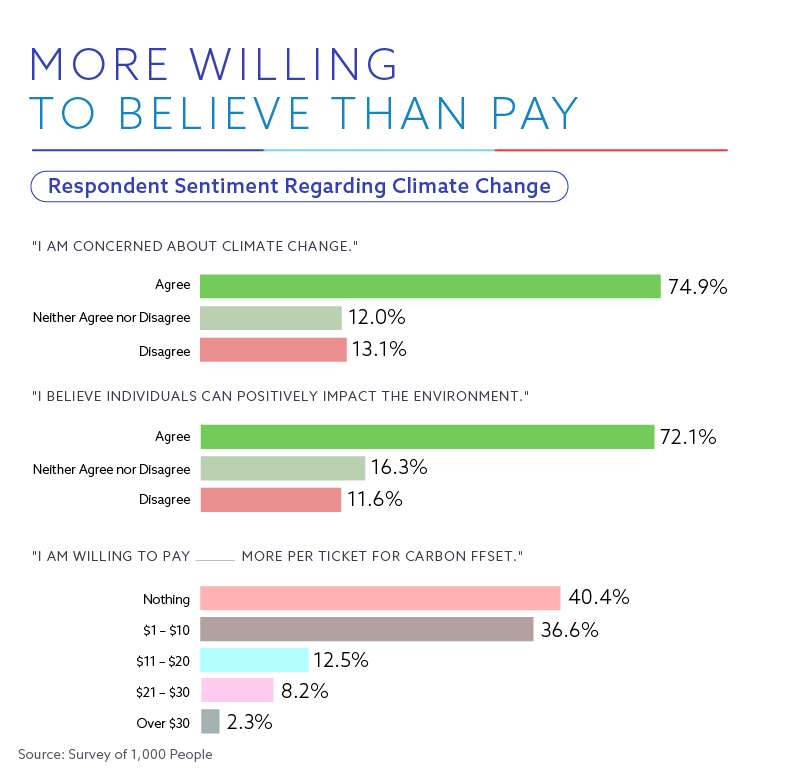 Will sustainability ever become an essential concern for airline travelers? In some respects, our respondents seemed to possess the attitudes necessary to spur such a change: Three-quarters said they agreed with the statement “I am concerned about climate change.” Because air travel accounts for a significant and growing percentage of global carbon emissions, these feelings would certainly seem relevant to the industry’s future. Additionally, 72 percent of respondents agreed with the sentiment that individual consumer choices can make a difference in environmental matters. Yet these sentiments stood in stark contrast to another finding: Most consumers aren’t willing to pay significantly more for environmentally friendly flying. In fact, 40 percent said they wouldn’t be willing to pay anything extra for a ticket that incorporated some kind of carbon offset program. Of those who would pay something, large contributions were rare: Merely 10 percent would add $21 or more to their ticket price. These findings contradict broader patterns in conscientious spending: Globally, 66 percent of consumers are willing to pay more for sustainable goods. But when we studied our respondents’ motives more closely, an emphasis on thrifty flying became clear. 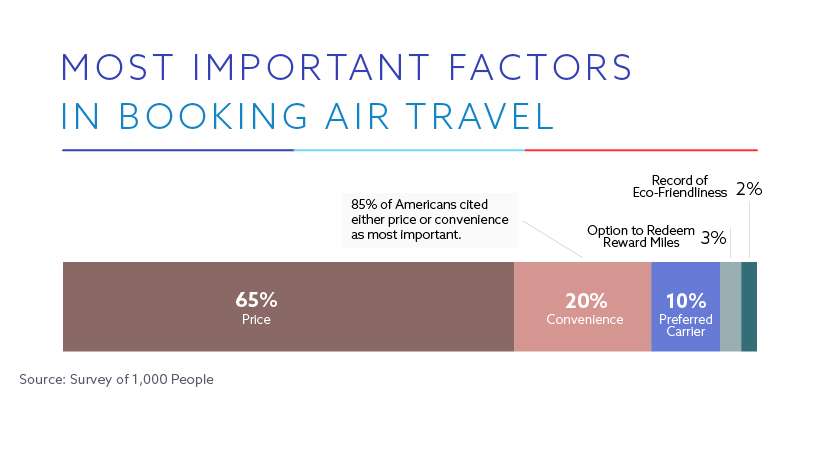 Price and convenience far surpassed other factors in informing our respondents’ airlines selection: 85 percent of respondents picked one of these two as their top priority. These findings speak to the effects of competition in the air travel industry: As more airlines fight for consumer dollars on price-comparison platforms, flyers can get picky with regard to price and flight timing. Comparatively speaking, environmental questions were just a remote concern: Two percent of respondents rated an eco-friendly track record the least important factor in choosing which airline to fly. 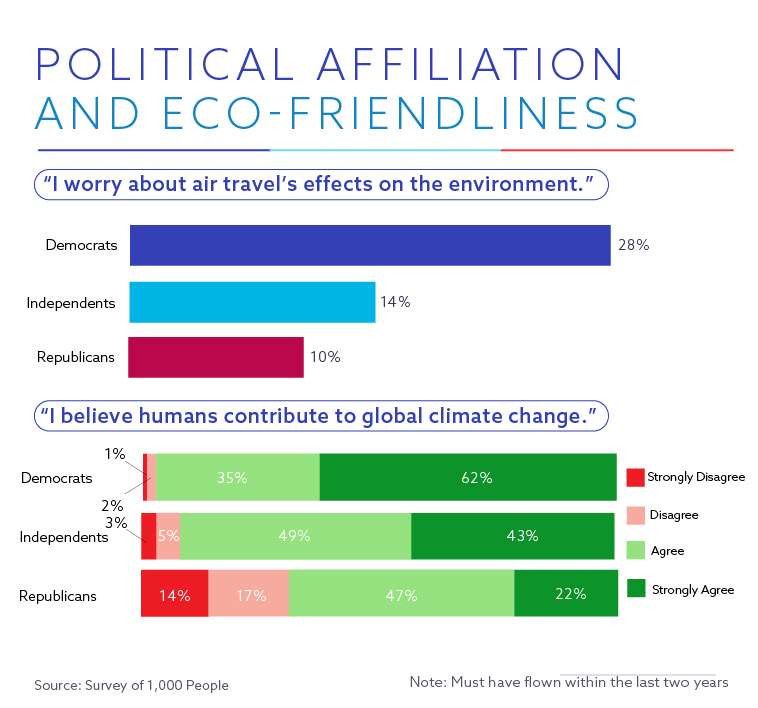 Because climate change continues to sow division on Capitol Hill, it’s reasonable to expect concerns about the environmental impact of air travel to differ by political affiliation. Still, the disparity between Democrats and Republicans is quite striking: Whereas over a quarter of Democrats said they worried about the effects of air travel on the environment, just 1 in 10 Republicans said the same. Independents aligned more closely with Republicans on this issue; just 14 percent said they worried about the subject. Among Democrats, Independents, and Republicans, the majority agreed or strongly agreed that human actions contribute to climate change. This finding presents yet another seeming contradiction: Although people across the political spectrum acknowledge the impact of human activity on the planet, most don’t worry much about emissions from air travel specifically. Perhaps those who care deeply about environmental issues are simply making changes in other aspects of their lives, reluctant to relinquish the travel that planes make possible. Indeed, some critics have even identified air travel hypocrisy among climate change scientists, noting that many jet around the world to conduct research and attend conferences.

Pitching in vs. Income 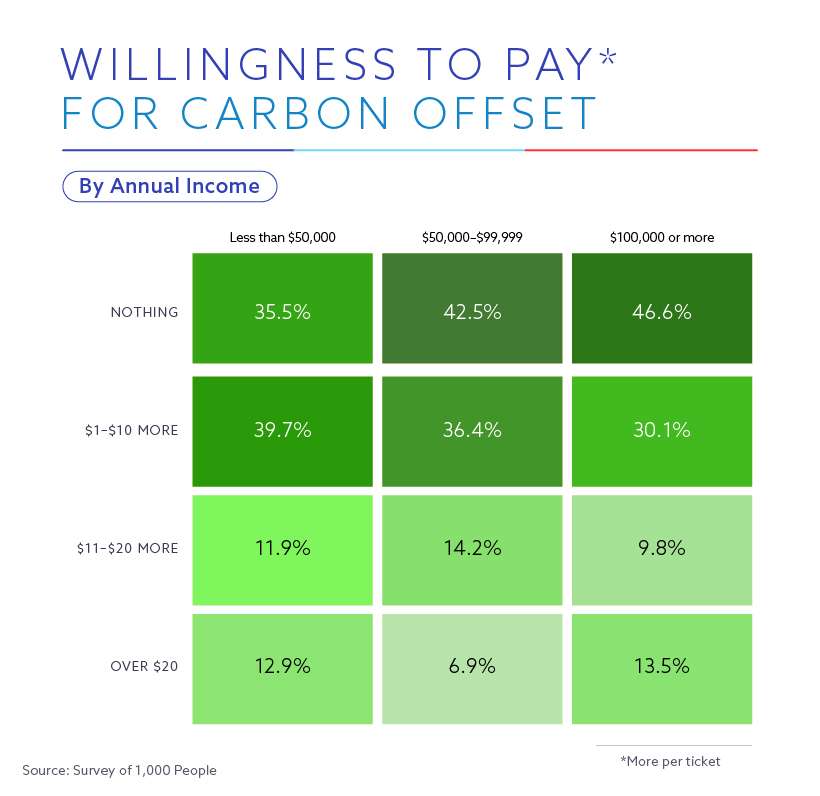 Perhaps it’s unfair to expect some consumers to pay more for sustainable flying – many Americans find the price of travel uncomfortably high already. But our findings suggest wealthy travelers are actually least likely to pay for a carbon offset. Of those who earned $100,000 or more each year, 47 percent said they’d be unwilling to pay anything above current prices. Comparatively, 36 percent of those who made less than $50,000 would be unwilling to pay anything to curb the carbon footprint of their flight. One possible explanation for this counterintuitive trend may be the frequency with which each income group travels. It’s reasonable to assume that those with significant means fly more frequently, so the additional cost per ticket could add up over dozens of flights. Conversely, those who earn less may only travel occasionally – if at all. One recent study found about 1 in 10 Americans never leave their home state. 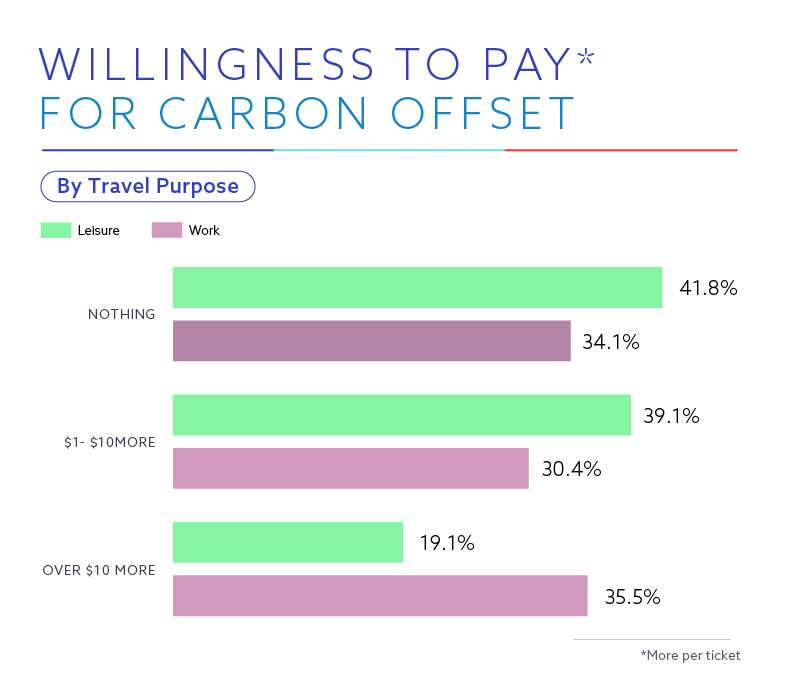 Of course, you may not mind an additional carbon offset fee if your job pays for your ticket. That attitude may explain why business travelers were less likely to say they’d pay nothing than those who typically fly for leisure. Likewise, business flyers were much more likely to approve of an added sustainability cost above $10. With Americans taking approximately 460 million business trips each year, those added fees could make a significant difference. 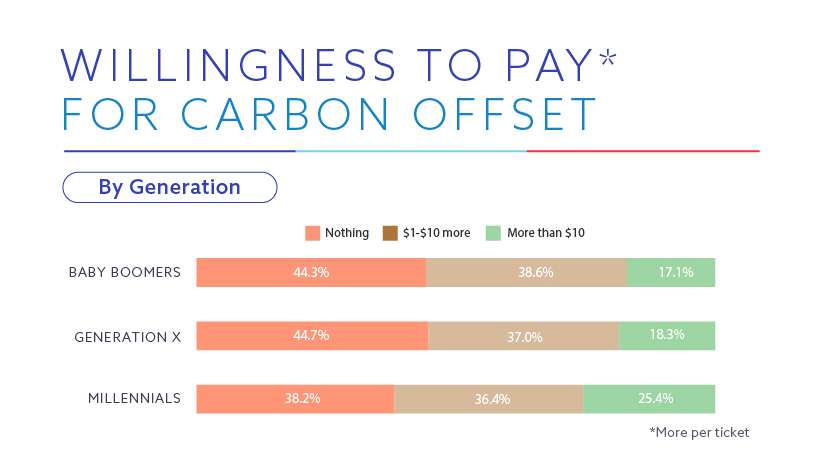 The Value of Values

Our results suggest a gulf between abstract concerns and concrete action: Although most respondents expressed worries about global warming, few passengers were willing to pay substantially more for environmentally friendly flights. In the long run, however, consumer savings and sustainability may prove compatible. As fuel prices climb, carriers are looking to fuel efficiency to lower costs, and consumers could eventually benefit from these savings. And while short-term investment in newer technologies may raise ticket prices temporarily, that investment could help keep flight prices reasonable in the years to come. Whether you’re looking for low costs or luxury, great flying experiences depend on responsive service. If the team behind your flight drops the ball, even a great deal can prove disappointing. Stratos Jets offers an unparalleled degree of personalization to ensure your private jet experience delivers the luxury you deserve. To see how much better flying private can be, check out feedback from real customers.

We surveyed 1,000 people on recent air travel and their beliefs about climate change through Amazon’s Mechanical Turk, with a survey built on SurveyMonkey. Our respondents included 498 men, 500 women, and two respondents who specified a different gender. To qualify, respondents had to have taken at least one commercial airline flight in the past two years. To determine environmental friendliness rankings, we used the 2015-16 ICCT Fuel Efficiency Rankings (released 2017), and passenger volume was taken from the U.S. Bureau of Transportation Statistics. We did not include an attention-check question in this survey, so it is possible that our results are skewed by respondents who did not take the survey seriously. The data we are presenting rely on self-reporting. There are many issues with self-reported data. These issues include but are not limited to: selective memory, telescoping, attribution, and exaggeration.

Fair Use Statement If you’d like to help us spread the word regarding airline fuel efficiency, you’re welcome to share our project for noncommercial purposes. If you do, please include a link back to this page to attribute our team appropriately.