In The Spotlight – Boston Logan Airport 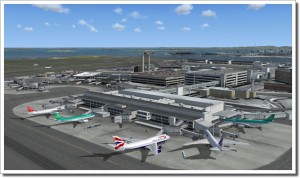 As jet charter industry leaders, at Stratos Jet Charters we believe our best client is an informed one. In our ongoing series, we put the focus on some of the most popular jet charter airport destinations across the United States; next up is Boston Logan Airport.

Boston Logan Intl Airport (BOS); fully named “General Edward Lawrence Logan International”) is an outstanding example of what an airport could and should be. Situated east of Boston, Massachusetts and overlapping into the town of Winthrop, Logan International is one of the best operated, thoroughly modern airports in the United States. Logan is a highly efficient facility designed to provide the most convenience and comfort to travelers, and if you’re considering private jet travel to or from the New England region, it’s often the preferred airport of choice.

The facility bucks the trend of many of our other top airports for jet charter, in that it’s an international airport with a tremendous amount of commercial activity in addition to general aviation and on demand charter service. Unlike Teterboro or Van Nuys, for example, Logan has well over 40 commercial carriers of various sizes that operate out of the facility. In fact, as of 2011 the airport was the 19th busiest in the country, with almost 14 million boardings and 28 million passengers overall. Operationally the airport consists of 2,384 acres and has six runways.

How can an airport so large be one of our top jet charter destinations? In addition to having a smart, efficient design for air traffic, the airport is extremely well-served by all types of public and for-hire transportation. So much so that the airport was even awarded “Easiest Airport to Get To” by Aviation.com in 2007. The airport has even developed a special application called “GetUThere” that allows users to find the fastest, most convenient routes of travel to and from the airport. And of course when desired, your Stratos Jet Charters client representative can assist you in with luxury ground transportation, waiting for you on the tarmac, with our premier concierge services.

Boston Logan Airport prides itself on being a customer service oriented airport. In addition to its beautiful layout featuring modern architecture and a bright, airy design, the airport also has several high-quality restaurants, free Wi-Fi, a public art program and even a spa. Because of these amenities, Logan is preferred by celebrities and other VIPs, government officials, business executives, and other high-net-worth or high-profile individuals for both the convenience and options it offers.

When planning your trip to Boston and the New England region, call Stratos Jet Charters for the best available pricing on private jet charter rates on the safest, most comfortable and appropriate aircraft for your charter flight. Contact one of our experienced jet charter experts 24 hours a day, seven days a week, who can arrange your flight to the Boston Logan International Airport or all other destinations, both domestic and international, with as little as four hours notice.