O’Hare Airport: The Man Behind the Name

He could have turned back to the USS Lexington. He could have splashed into the sea like the other bombers. Instead, Butch O’Hare made a series of moves that led him to become a celebrated war hero and the namesake of O’Hare Airport.

Who was Butch O’Hare?

A better first question is: Who was Butch O’Hare’s dad? His father was known in some circles as ‘Easy Eddie.’ And by ‘some circles,’ we mean the folks in the inner circle of Al Capone. Easy Eddie, or EJ O’Hare, was a lawyer, who first gained wealth and acclaim in Chicago by purchasing a widowed client’s patent rights to the mechanical rabbit that baits racetrack greyhounds. Later, according to legend, O’Hare was on retainer by Capone and kept the notorious gang leader from behind bars. They say the O’Hare family’s mansion took up an entire Chicago city block. But, according to some, eventually O’Hare wanted to do the right thing, and cooperated to have Capone charged, and jailed, for tax evasion. Two months before Capone was released from Alcatraz, Easy Eddie was gunned down and killed. On that very afternoon, his son Butch, a Navy pilot, “…had made two training flights at the Naval Air Station Pensacola in the Florida Panhandle. The sky he was flying in was a brilliant azure, dotted by a few white puffs. He landed at sunset—and heard the news of his father’s death.” (Source: St. Louis Magazine)

How did Butch O’Hare become a war hero?

In 1942, the USS Lexington was on a mission to head to the South Pacific and attack the Japanese. On one fateful afternoon, though, more than a dozen Japanese bombers were sent to attack the Lexington and its Wildcat fighters.

At this point in the story, some tellers say O’Hare was launched into the sky and realized his fuel tank hadn’t been filled, and was about to head back to ship when he noticed the Japanese fighter planes approaching the Lexington. Other stories say in between the two waves of attacked, O’Hare and his wingman simply realized they were “the only American fighters positioned to attack” the Japanese, who were about to bomb the Lexington. Either way, at this point, O’Hare and his wingman fired their machine guns at the two in the enemy’s ‘V’ formation. In just a handful of minutes, just as many bombers dropped. His ammunition ran out, and then, some stories say, he clipped his plane against the others in the face of fire to take the enemy plane down. The Japanese abandoned their mission. The Lexington was defended. O’Hare was hailed a hero, and given the Congressional Medal of Honor. More than 50,000 people filled the streets in a parade to commend O’Hare in St. Louis in April, 1942. In 1943, his Hellcat fighter jet was fired at by the Japanese southwest of Hawaii, and the plane splashed into the ocean.

How Did O’Hare Airport Get Its Name? 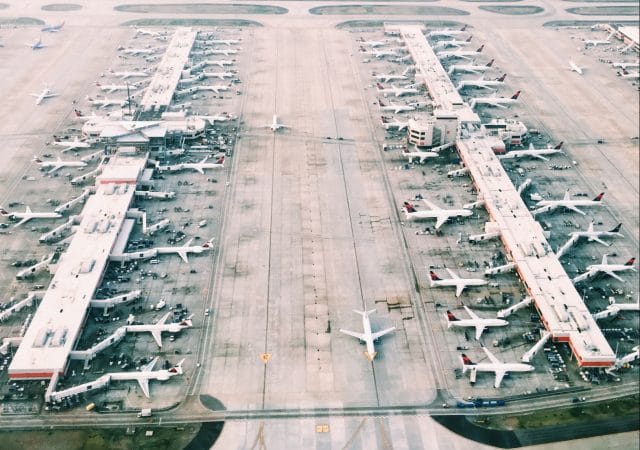 Photo by Skyler Smith via unsplash.com

It was the publisher of the Chicago Tribune who came up with the idea to name Chicago’s new airport after O’Hare.  And so–even though he never lived in Chicago–O’Hare Field was dedicated to Edward ‘Butch’ O’Hare  on September 17, 1949. And that’s the story behind O’Hare Airport. Learn more about the history behind O’Hare Airport and the way our jet charter services serve travelers like you from it every day! On your private jet charter aviation adventures, ensure you’re flying with the best. Stratos is one of only a handful of jet charter brokers to be certified (not just registered) with ARGUS. That means we meet the strictest standards, and go a step above with our own vendor approval program. Call 888-593-9066 or start your quote!