Private Jet Destinations: Why Density Altitude Matters & What to Expect

With summer well on its way and warmer temperatures influencing travel plans, there are some special considerations to be made when booking a charter flight to high altitude destinations. Most of the private jet destinations in these areas can be affected by certain conditions, causing delays and unexpected stops.

Before you plan your next trip to the mountains or to some of these secluded destinations, here’s what you need to know.

What is density altitude?

Here’s an example of how density altitude can affect an aircraft taking off: 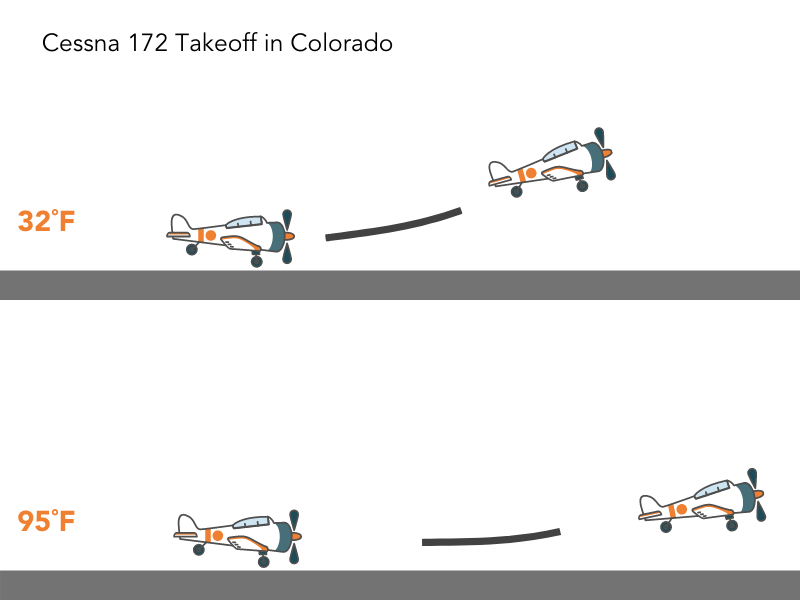 How can density altitude affect my flight to some private jet destinations?

On a humid and hot day, most common during the summer season, an aircraft will experience a slower rate of climb. Since the air is less dense, the aircraft has less lift and will require longer-than-normal distances for takeoff and landing. This density also reduces propeller/impeller efficiency and thrust.

A high-density altitude can lead to delays, rescheduled flights, and unexpected fuel stops. If density altitude is considered a factor to be considered at your departure location or at the destination of your choice, flights may be scheduled in the morning or evening to avoid the hottest part of the day. You may also be asked to pack lighter than usual to reduce the gross weight of the aircraft.

Let’s say you’ve booked a charter to Lake Tahoe with an arrival time of 3 pm. The airport in that region sits at an elevation of approximately 6,200 feet above sea level. Upon arrival, the temperature has reached an uncommon 92-degree high with a call for potential summer showers. With the combination of high altitude, a low pressure weather system, and warmer temperatures, the altitude density is much higher than usual.

In order to land the aircraft, the pilot will have to take the runway length and the aircraft’s reduced performance into account. If the approach isn’t safe, the pilot may change course and divert to a longer runway. This, however, means you’ll arrive later than expected. The best way to avoid these delays is to plan to arrive later in the evening or first thing in the morning.

You May Need to Stop For Fuel More Often

In some cases, especially when low density altitude is expected, the fuel tank on your charter aircraft won’t be filled to the brim prior to takeoff. In this case, the weight of the fuel is taken into consideration when flying into those areas, and additional fuel stops along the way can be expected.

Some routes that may require an additional fill-up include:

At Stratos, we make it our mission to provide clients with the transparency and honesty they need to make informed buying decisions. If you’re ready to book a private jet charter to the mountains this summer, reach out to one of our experienced private flight advisors. We’ll work with you to make sure your trip is planned and executed perfectly. Request a quote today!