Private Jets in 2015: The Top 5 BizAv Events that Made News

From users of private jets actually being praised in the media to the production of the HondaJet, we look back on a year of private aviation news.

1. Forbes explained how users of private jets are not villains

It’s easy to criticize the use of private jets: Before dividing by the number of passengers, before considering all the ways time saved translates to robust companies that fuel jobs and philanthropy…before, oh we could go on—a $12,000 flight on a charter jet might seem extravagant. Hence a bit of backsplash about private jets by media, tree-huggers, politicians, etc. So, it was utterly refreshing to read Four Reasons Not to Hate on Private Jet Users. In this Forbes article, Doug Gollan tops his list with ‘manufacturing jobs’—citing 1.2 million jobs related to private aviation, and an industry that contributes more than $150 billion to the US economy. “Private jet manufacturing is a star performer for the U.S. in manufacturing, perhaps something to think about for politicians who rail against jets, but also say they want to bring high-quality manufacturing jobs back to America,” writes Gollan. 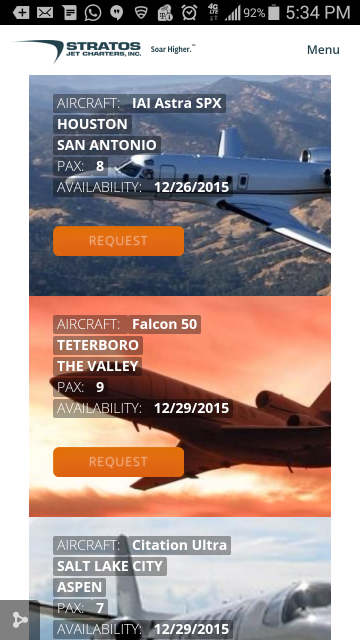 In a bid to meet an ever-growing demand for empty leg flights on private jets, in 2015, Stratos launched the industry’s most user-friendly, mobile-friendly site for empty legs, also known as deadheads and one-way jet charters that would otherwise fly empty. The Stratos private jet empty legs site offers:

3. The NBAA 2015 Convention proved ‘BizAv’ is alive and well 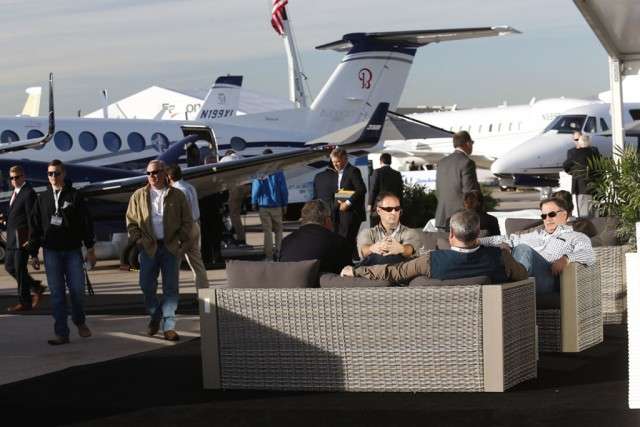 If anyone on the outside thought for a moment that the business aviation industry didn’t have “vitality and relevance,” they would have been disproved quickly at the National Business Aviation Association Convention, held Nov. 17-19 in Las Vegas. With more than 25,000 attendees (including many VIPS and celebs), 1,000 exhibitors and 100 aircraft on display, this convention is always a gathering place for the who’s who of ‘bizav.’ On press day, major private jet manufacturers offered a state of the union. Gulfstream reported already delivering 116 aircraft so far in 2015, and third-quarter revenues up almost 5 per cent over the same quarter in 2014. Bombardier brought actor William Shatner to the convention to showcase its new high-speed in-flight connectivity solution—WAVE (Wireless Access Virtually Everywhere). The NBAA and Corporate Angel Network raised a whopping $505,000 at their annual charity benefit to support life-saving flights for cancer patients.

4. Crashes and close calls supported the need for safety over price

In December we read about a private plane carrying Morgan Freeman making an emergency landing after blowing a tire at takeoff. Freeman and others were uninjured. Nine people lost their lives after a private plane crashed on an Akron, Ohio apartment building. Stratos urged private jet travelers to make safety a priority over price, and explained the risks of booking on price alone.

5. The HondaJet went into production; Aerion Corp announced plans for its supersonic jet 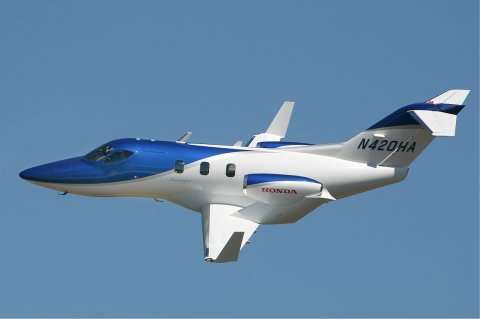 In the Business Insider article Honda is About to Start Delivering its Sports Car Private Jet, we learned that the seven-seater “flying sports car” has been FAA certified and en route to owners. At the end of the year, Wall Street Journal reported Aerion Corp.’s ‘superfast’ AS2 business jet was moving ahead. For just $120 million, the lucky owner will be able to travel 4,750 nautical miles at up to 1.5 times the speed of sound. That translates to a 4.5-hour flight from London to New York rather than seven hours. The AS2 is expected to be in service in 2023. Where can you find a charter jet company that sets standards for safety, service and selection? Stratos Jet Charters is proudly obsessed with all three. To book a flight, invest in a Jet Card or learn more, call (888) 593-9066 (toll free) or request a quote online. Feature image courtesy NBAA.