VFR, short for visual flight rules, is just one of many pilot terms commonly used in aviation. The term is used to describe a set of regulations where a pilot operates an aircraft in clear weather conditions. The conditions must meet certain criteria before a pilot can fly under the VFR regulations. Basically, the pilot must be able to operate an aircraft while being able to clearly see the ground and any other obstructions or aircraft.

If the weather is not clear enough to meet these minimums, the pilot must fly under the instrument flight rules (IFR) regulations. IFR is another one of the more common pilot terms used in aviation. When a pilot flies according to IFR, they must rely on their instrumentation rather than their line of sight. This is comparable to driving a car, where the driver can see landmarks, roads, bodies of water, etc.

Pilot’s typically prefer flying under VFR regulations. However, a pilot must be certified and meet specific criteria before flying an aircraft under VFR. Some of these conditions include:

Before a pilot can depart on a flight under VFR, the pilot must prepare and file a VFR flight plan, be able to clearly see for three statute miles, stay approximately 500 feet below the clouds or 1,000 feet above them, and keep a 2,000 foot horizontal distance from them as well. 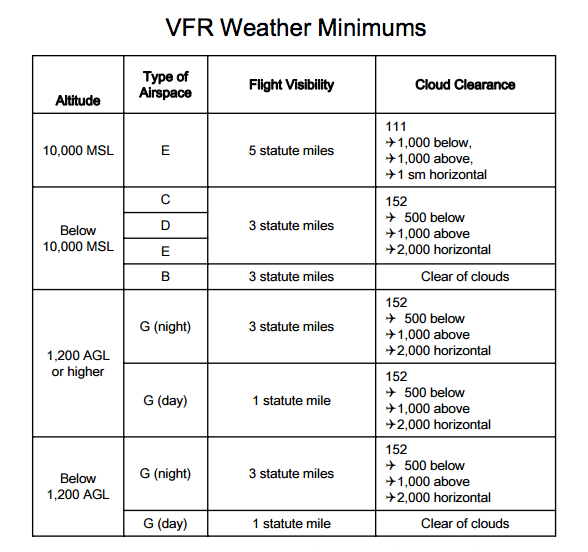 This chart was originally published by www.faasafety.gov