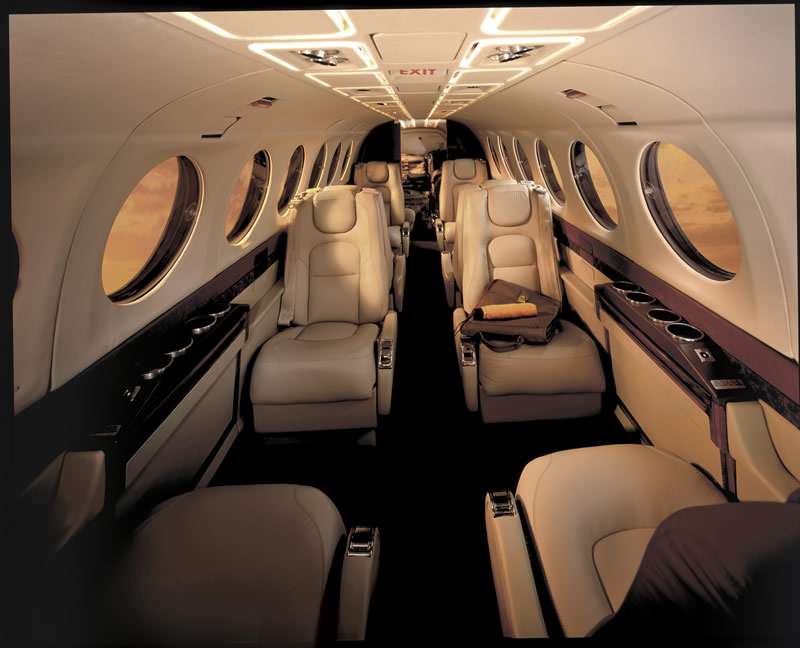 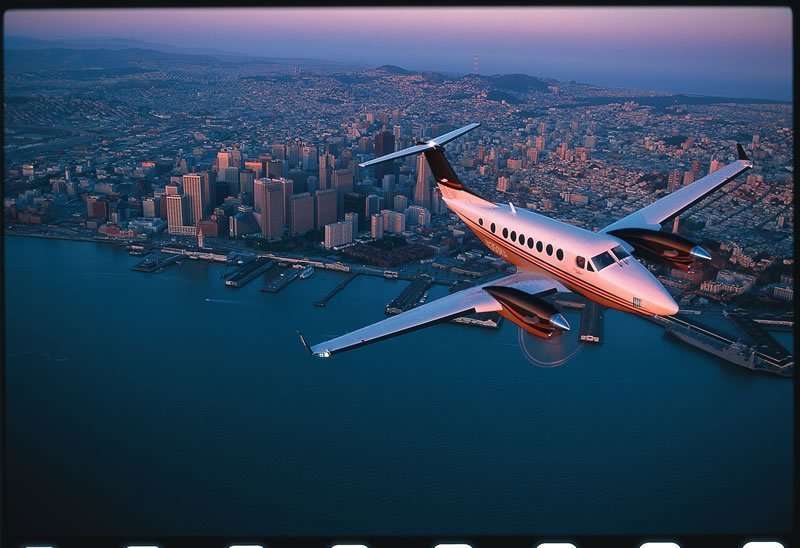 The King Air 350 is the premier turboprop aircraft in the Beechcraft fleet. It is also the largest and boasts some of the best payload carrying capacity in its class. A stretched out version of the King Air 300, the 350 inherited the same T-tail design, providing pilots with enhanced stability during takeoff and landing. Few turboprops can soar up to an altitude of 35,000 feet like the King Air 350 can. In fact, most turboprop competitors can’t reach that altitude at all. In particular, this high-altitude performance allows it to fly:

Its large, comfortable, 19-plus-foot cabin is nearly three feet longer than the model 200. It’s roomy enough for nine passengers, and comfortable enough even for longer flights. The Beechcraft design team went to great lengths to ensure the cabin environment rivals that of some private jets. For example, to keep engine noise to a minimum, they bolted dozens of specially designed tuning forks directly onto the airframe. They act as sound absorbers that prevent propeller noise and vibrations from entering the cabin. Beechcraft further enhanced the cabin’s appeal by adding two large windows on either side of the plane, for a total of 14. As a result, the cabin is bathed in natural light, adding to its feeling of spaciousness. And for after-dark missions, the indirect overhead lighting emits a natural glow. The cabin of the King Air 350 also features an environmental control system designed to increase cabin airflow. This system includes dual climate control, which allows for separate temperature settings in the cockpit and cabin. Another notable improvement to the King Air 350 series was the inclusion of the Rockwell Collins Pro Line 21 avionics suite, introduced in 2003. For charter plane travelers who like to take ‘stuff’ with them, it doesn’t really get any better than the King Air 350. With an MTOW of 15,000 pounds, you can usually fill the plane with a full complement of eight adult passengers and still have enough carrying capacity for all of your belongings. As you enter the aircraft via the aft airstair, there’s a 55-cubic-foot storage compartment that will accommodate: Best of all, this compartment is pressurized, heated and you can access it while inflight. And with a square-oval cabin that measures 355-cubic feet, you won’t feel cramped while flying. In its standard double-club configuration, there’s plenty of room to maneuver. Plus, the seats all swivel, track and recline, giving passengers the ability to relax in any way they see fit. For added convenience, there’s a large, private lavatory in the rear. The King Air 350 can cruise at a maximum speed of 360 mph and it has a maximum range of 1,806 nautical miles. We frequently organize private flights on King Airs in the North East between New York and Boston, or from Charleston, South Carolina to the Bahamas. Runway performance is another specialty of the King Air 350. It needs just 3,300 feet of tarmac to take off at sea level on an average day. For a plane of its size, that’s remarkable. It also performs admirably when taking off from higher-elevation airports, even at higher temperatures. In summary, the King Air 350 shares many of the trademarks that have made this line of turboprops so successful, including: However, this one happens to be larger and can carry more, giving clients more options when they choose to book charter flights for business or leisure.
show more

Compare Other Private Jets to a Beechcraft King Air 350