From the family that bundled a baby buffalo into their car because he looked cold to vacationers who rent our holiday apartments, patronize our businesses, and bolster our economies, tourists are a group of people many of us love to hate and some just love to love. So how does your state, region, or town feel about the tourists in your midst? We turned to Twitter to find out.

How Your State Feels About Tourists 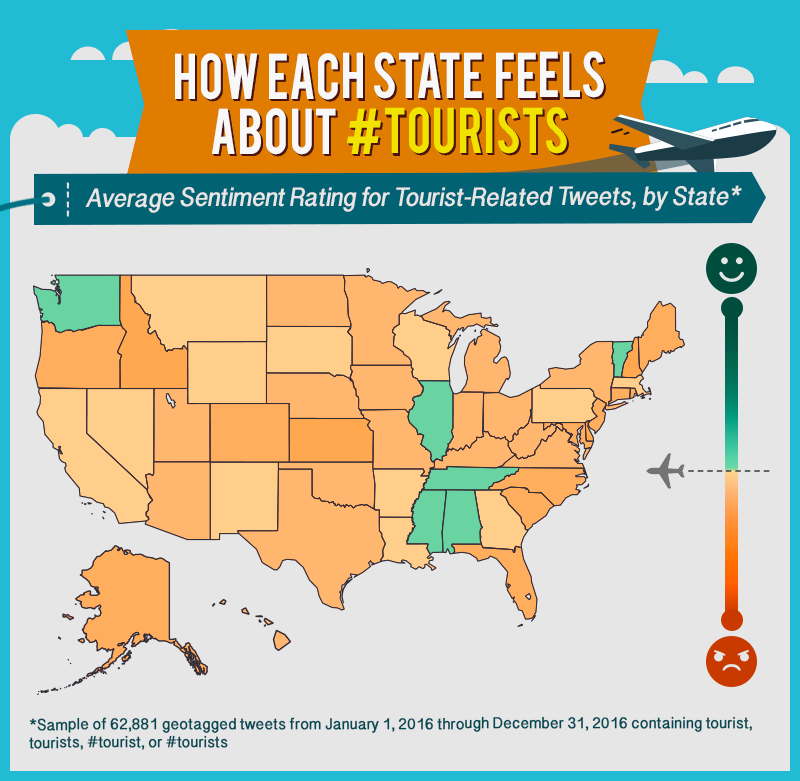 Analyze over 62,000 geotagged tweets and you’ll find that the majority of the good old US of A feels pretty negatively about the tourists in our midst.

Someone just mocked me for wearing my coat while he wore shorts and a tee. There’s a #coldbreeze. Leave me alone #tourist. #LAweather

And who could blame us? They might be a big part of the economy, but they’re also ruining our views, overrunning our favorite local restaurants, and literally killing themselves while trying to take that perfect selfie. Of course, while sentiments run negative across most states, there are a few havens where tourists are seen in a more positive light. Washington, Illinois, Tennessee, Mississippi, Alabama, and Vermont all tweet more good than bad when it comes to their visitors.

Love and Hate, Then and Now 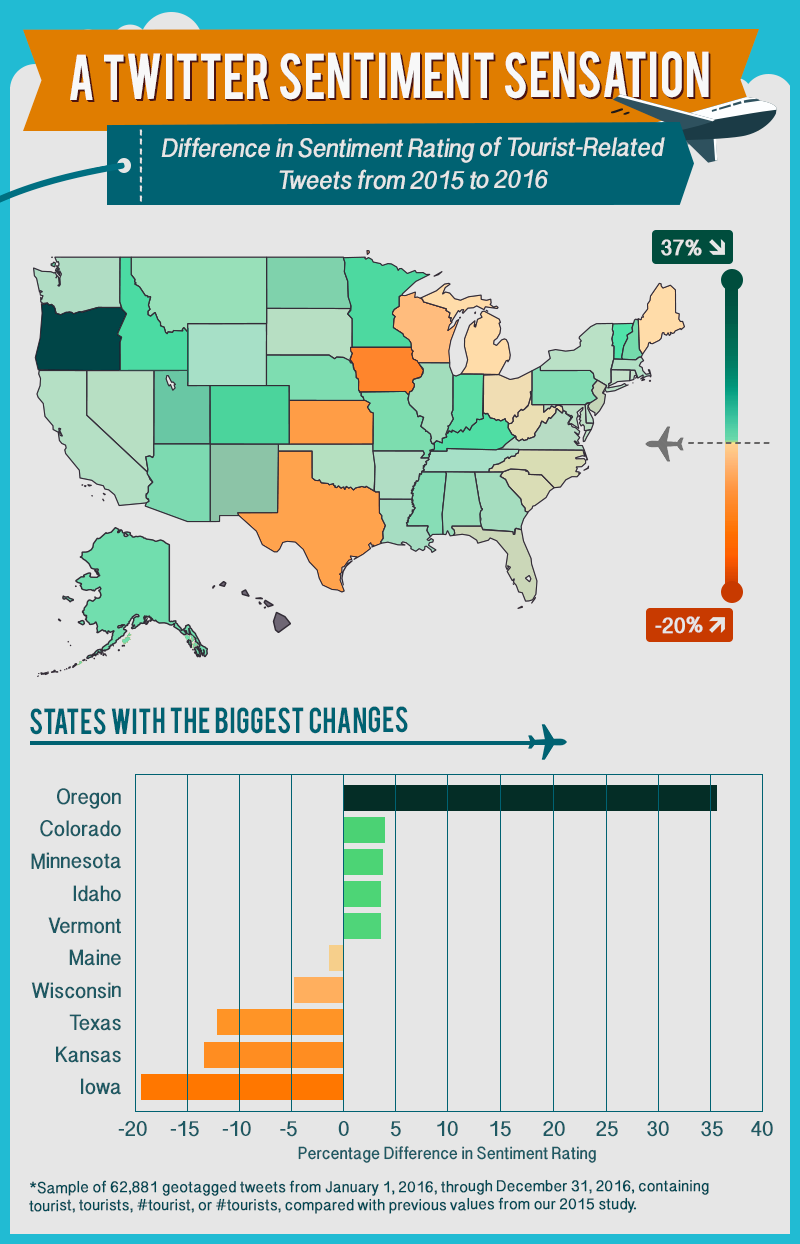 Overall, the U.S. may be feeling a bit anti-tourist … but has it always been that way? Luckily, we analyzed over 37,000 tweets back in 2015, so we’ve got the answers. Stack 2015’s tourist tweets against 2016’s and you’ll see some major shifts in feeling. Iowa, Kansas, and Texas are all feeling a little less friendly toward outsiders these days, while Oregon is feeling a whole lot more love, despite the fact that some tourists destroyed one of its rock formations last year. Interestingly, Oregon also ranks high lately for its openness to refugees and as a popular place for relocating Americans from across the nation. So perhaps an openness to outsiders of all types is on the rise in the Beaver State.

Want to Feel the Tourist Love? Visit These Cities. 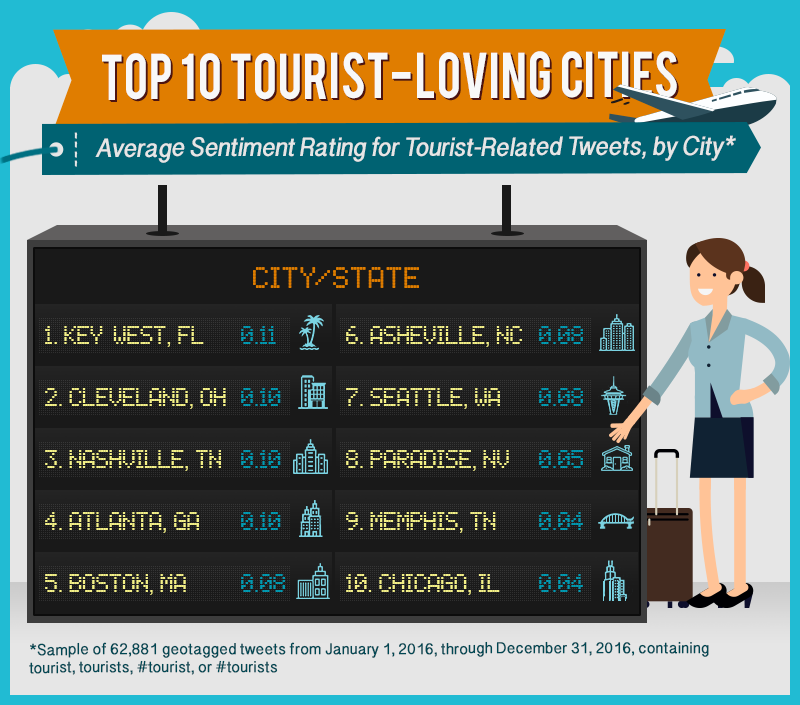 If you’re a tourist hoping for an open-armed welcome, the 10 American cities with the most positive tourism sentiment on Twitter might be a good place to start – luckily, their appeal and locations are, quite literally, all over the map.

Be nice to the #tourist. But put yourself first.#SignOfTheTimes. Go local or go home. pic.twitter.com/ZyL8qLvNtM

For sand, sunshine, and locals who are happy to have you around, try Key West, Florida. For a cooler coastal backdrop, Boston, Massachusetts, is the place to be. And if it’s country music and southern comfort you’re craving, Nashville, Tennessee, would be happy to have you, too. 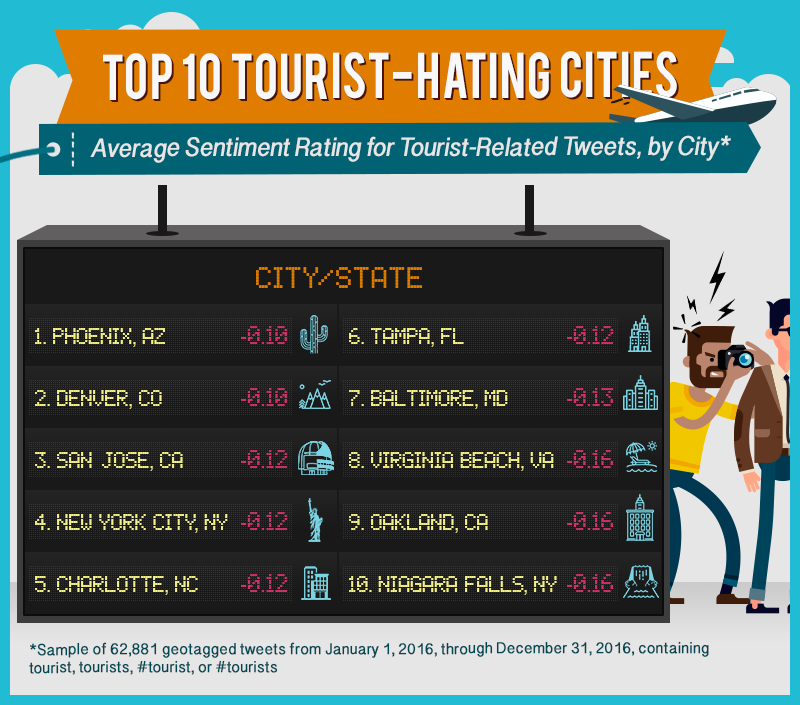 On the other side of the traveler coin, the 10 American cities least happy to see that tour bus pull in and most likely to express their not-so-friendly feelings on social media include Phoenix, Arizona, and Denver, Colorado. It’s not the first time Phoenix has been called unwelcoming. In fact, it made our top 10 list in 2015, as well. It has since risen in the ranks, going from No. 8 to No. 1 on our most-tourist-hating list. Denver, on the other hand, is a new addition and a big surprise. In 2008, it ranked as one of the friendliest cities in the nation and in 2016, it ranked as the No. 1 city to live in in the U.S. 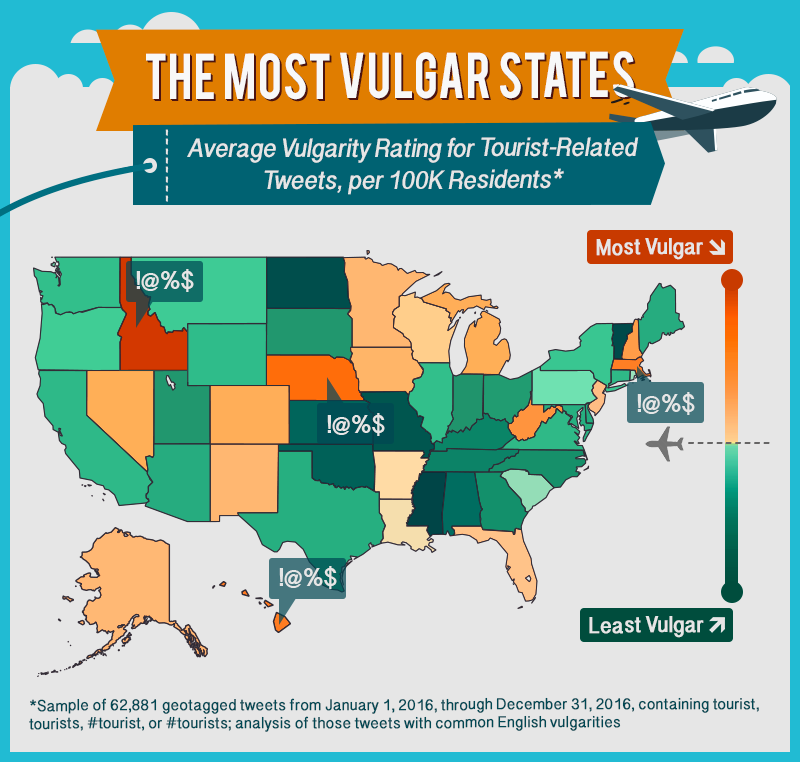 While Niagara Falls and Oakland may have the highest percentage of negative tweets about tourists, does that really make them the least welcoming? We also analyzed the intensity of tweets based on their profanity. So, which states are most likely to curse in their anti-tourist tweets? This year’s top vulgarity rating goes to Idaho, followed by Nebraska, Hawaii, and Massachusetts. 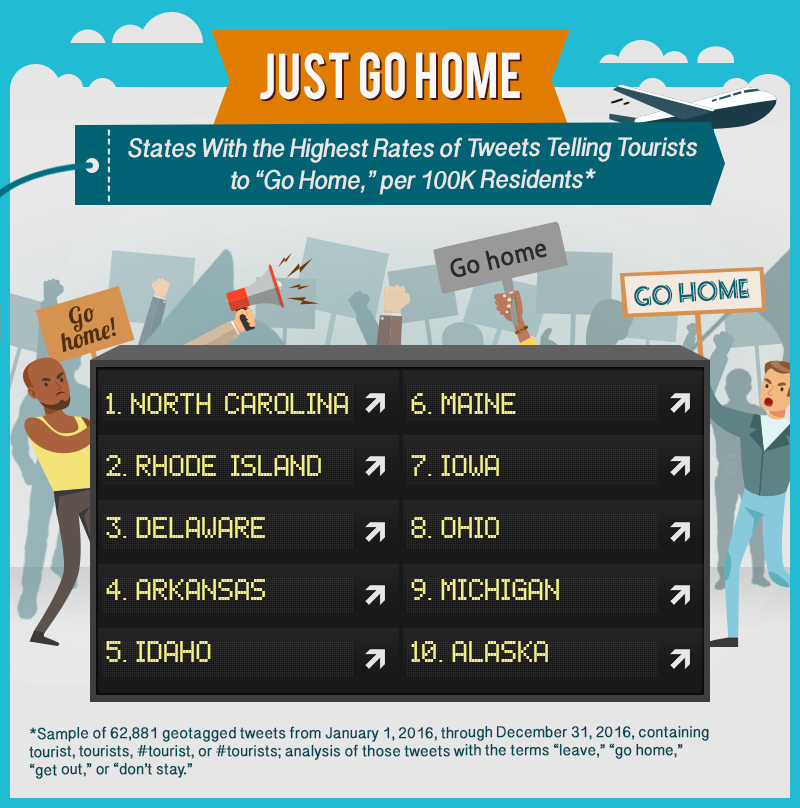 Some states may use profanity to get their point across, but others just get right to the point, telling tourists to “just go home.” North Carolina leads the pack on this one, followed by Rhode Island and Delaware.

#tourist has never seen drama on public transit. Calls cops. Delays everyone. #california is just too out of control. Go home.

There are plenty of awful stories about tourists, like those who kill baby dolphins and interfere with bison, overrun ancient cities, and spoil previously unspoiled beach towns. But there are also plenty of communities that benefit greatly from the influx of vacationers, plenty of reasons to celebrate and love tourists – from an influx of tourism dollars to an increase in local amenities to a rise in local diversity of both backgrounds and opinions. (And don’t forget, most of us are tourists at one time or another – so they can’t be all bad.)

We pulled 62,881 geotagged tweets from January 1, 2016 to December 31, 2016 containing the terms “tourist” and “tourists” and posts containing #tourist or #tourists. We ran the tweets through the AlchemyAPI sentiment analysis to determine how positive or negative each city’s and state’s tourist-related tweets were.