Tourism. It’s a trillion-dollar industry that has a positive economic impact on countless businesses – including private jet charter companies like ours – and their employees in destinations all over the country. Still, while travel may be good for businesses, it does invite an influx of tourists who elicit varying opinions from the people who call these places home. And Twitter happens to be full of these local perspectives. We wanted to know just what people in popular destinations were saying, so we examined a collection of #tourist tweets from locations across the U.S. and rated them based on the sentiment analysis feature of the AlchemyAPI. The results show positive or negative tourist-related tweets from each state. Check out the findings below.

We’ve heard of fear of flying, but never fear of tourists! 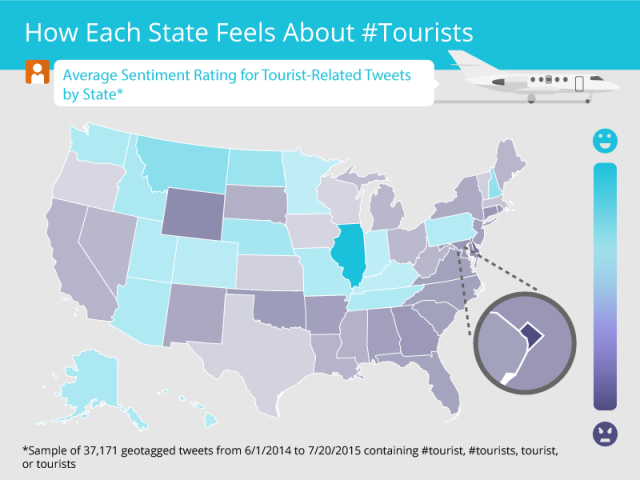 When the summer days grow long and hot, tourists start making their way to the beautiful beaches up and down the Atlantic Coast, the Gulf of Mexico, and the sunny California Pacific. Lathered in SPF 50, these visitors come armed with bathing suits, beach chairs, and plenty of booze. From spring breakers to family vacationers to bleisure travelers, everyone goes to the beach to have a good time – perhaps to the chagrin of the people who actually live there. Coastal states may be known for their warm and sunny weather, but the same cannot be said about their attitudes toward tourists. Most beach states – such as Florida, South Carolina, and California – were critical of coastal crashing. 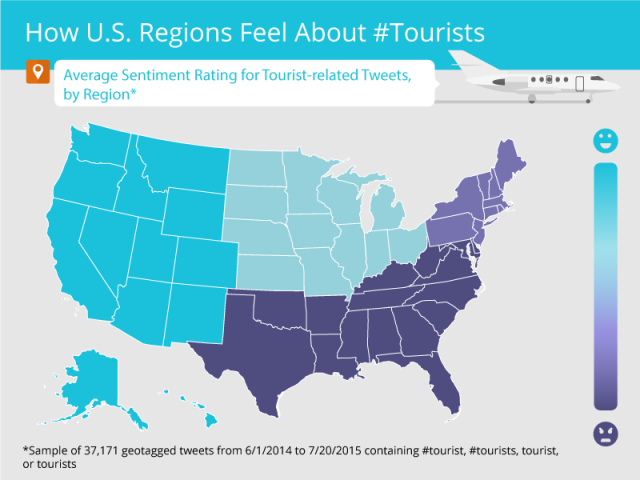 How do regional opinions stack up? The South and Northeast shared the most disdain, with a trending negative sentiment in both regions. The West ended up more or less neutral, while the Midwest managed an overwhelmingly positive sentiment score. 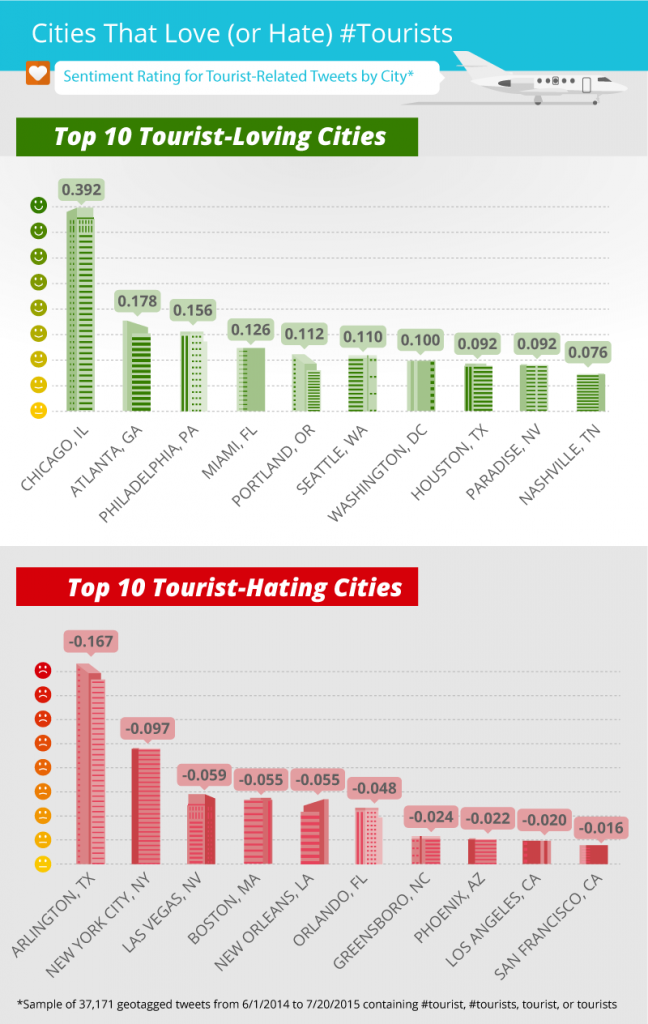 Some cities fall more on the “hate” end of the love-hate spectrum when it comes to tweeting about tourists. Arlington and New York City are the clear winners (or losers) here; Las Vegas, Boston, and New Orleans also featured negative sentiment scores. 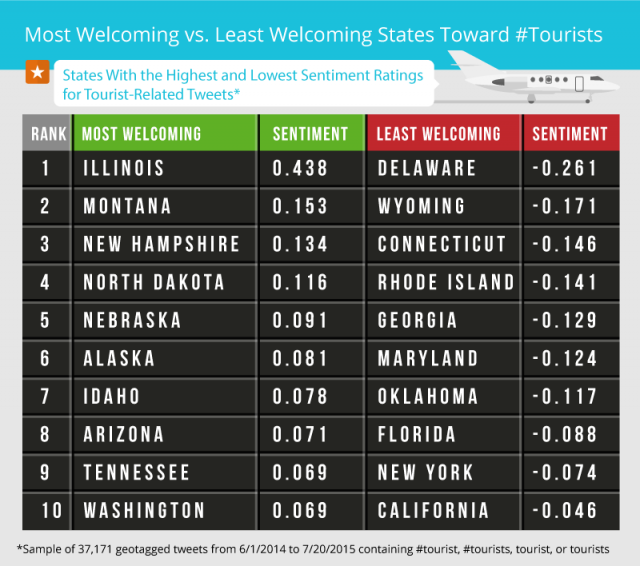 Illinois must really love travelers. Not only does it rank as the most welcoming state, but it’s home to Chicago as well. If the hot dogs and pizza weren’t enough of a reason for you to plan a few days there, perhaps knowing you’ll be welcomed with open arms by the locals will help your decision. When international tourists visit the United States, the most popular destinations are New York, Florida, or California, with a combined total of 25.64 million visitors in 2014. Unfortunately for our overseas guests all three of these states made the least welcoming list. 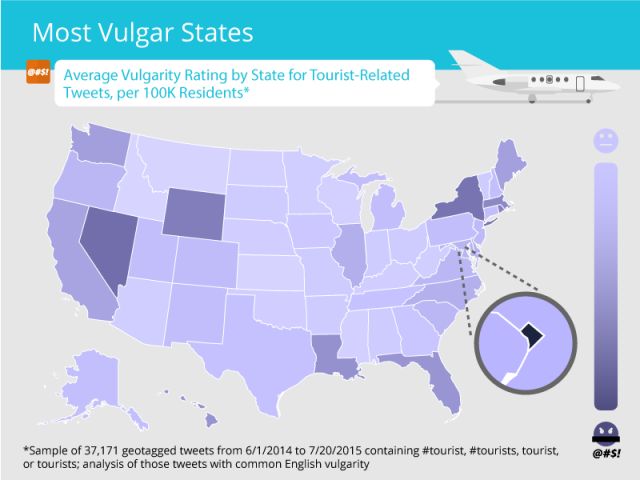 Plenty of people take to Twitter to complain about tourists, but some bring it to a whole new level by adding a few choice curse words. Where in the country are you most likely to get told off in a tweet? Washington, D.C. tops the per capita list, helped in part by the high number of commuters flooding the city by day and leaving for their homes in Virginia and Maryland at night. Nevada and New York are also all too eager to let tourists know how they really feel by using plenty of colorful language. 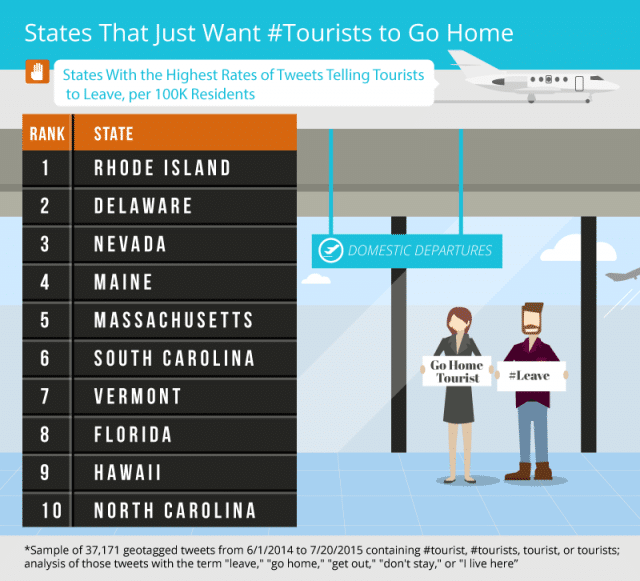 Tourism is so vital to certain places that their very existence depends upon it. Restaurants, bars, gift shops, transportation, and entertainment are just a few types of businesses that thrive when people visit (and spend money). Yet as much as these locations depend on tourists for a living, sometimes the influx is still too much. Residents of some states took to Twitter to express their frustrations. You’re most likely to be sent packing if you’re visiting somewhere along the East Coast; many of the top 10 states that tweeted terms such as “go home” and “leave” are located there. Travel is good for the soul. Whether or not you’re a seasoned tourist, sometimes it can be fun to loosen up a bit. Just remember that while you may be ready to party, the same won’t be true for everyone else in town. So give the locals a break from time to time. And if you’re a hometown hero and the visitors have you feeling down, maybe it’s time for you to take a vacation and become a tourist yourself. But you might want to leave your phone behind. “47% of tourists returning regret overusing their smartphone on vacation” according to BankMyCell.

We pulled 37,171 geotagged tweets from June 1, 2014 to July, 20 2015 containing the terms “tourist” and “tourists.” We also looked at 26 different cities that had at least 100 related tweets. We then examined all tweets containing those terms for each state as well, though we lowered the threshold to at least 30 related tweets as not every state had 100 tourist-related tweets. We ran the tweets through the AlchemyAPI sentiment analysis to determine how positive or negative each city’s and state’s tourist-related tweets were. We utilized 2013 population data to calculate the per capita rate for each state when comparing things such as vulgarity of tweets and tweets telling tourists to leave.