No matter how excited you are to reach your destination, there’s no denying that air travel can be a stressful experience. Perhaps an important flight was canceled or delayed, your luggage didn’t make the flight, or that flight-change fee was higher than expected. A decade ago, if you’d encountered this type of situation, you probably would have written a strongly worded letter to the airline voicing your concern. But now? You just might tweet the airline. Many consumers today are taking to Twitter to publicly share their kudos, concerns, and complaints with businesses. We analyzed tweets directed to various airlines’ customer support during a seven-week period between late November and mid-January to see what travelers have to say – and how airlines are responding. Read on to find how flying the friendly skies translates into tweeting friendly (and not-so-friendly) messages. 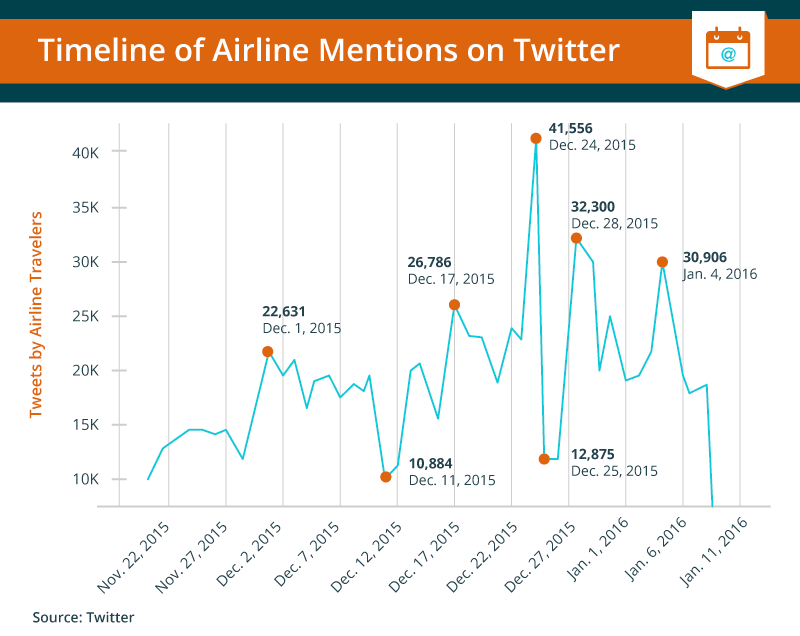 During the travel-filled holiday season, there’s no shortage of 140-character-or-less missives directed at airline customer service – in fact, people sent 1.3 million tweets between November 20 and January 9. When examining tweets by day, we noticed that the busiest days for tweeting tend to come on the heels of the busiest travel times. One explanation is that travelers may log on to voice concerns about the previous day’s travel. The top day for airline tweets was December 24, followed by December 28 and January 4. It stands to reason that people who travel the day before Christmas may be feeling pressure to make it to their destinations on time. As for December 28 and January 4, both come on the heels of two of the three dates projected by Airlines for America to be the busiest travel days of the holiday season – January 3 and December 27. Travelers may be logging on once they’re settled at their destinations to discuss the previous day’s travel experience. 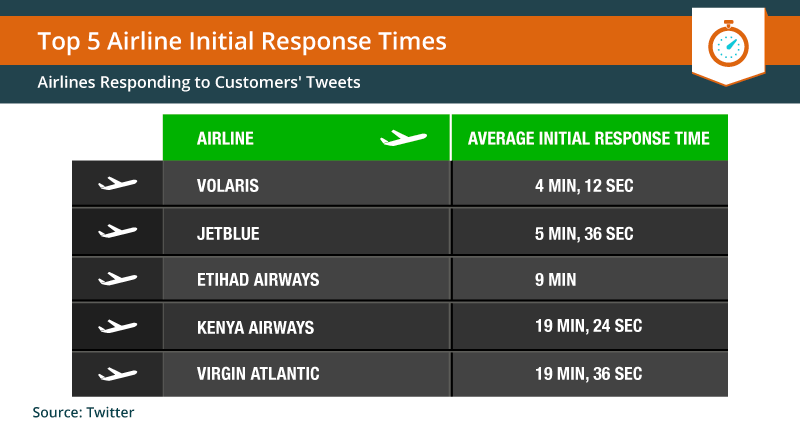 Companies employ various strategies when it comes to providing customer service on Twitter: One study shows that more than 80% of customer service–related tweets to U.S. businesses go unanswered by companies, but some employ entire teams trained in “social customer service.” And for frustrated travelers, response time can play a large role in customer satisfaction. We looked at airlines’ average initial response time to tweets from customers. Mexican budget carrier Volaris topped the list for speed, averaging just over four minutes to respond. Averaging around five-and-a-half minutes, the next quickest Twitter responder was JetBlue, which has long been lauded for its stellar customer service both on and off of Twitter. Etihad Airways, the national airline of the United Arab Emirates, came in third, averaging nine minutes to reply to tweets. Among the airlines on our list, quickest responder Volaris has two dedicated social media support teams that respond to queries around the clock. Our second-place responder JetBlue is known for having stellar customer service both on and off Twitter. Along with answering travelers who mention them on Twitter, the savvy social media team also tends to respond to customers who simply mention its brand in tweets – meaning they are tracking keywords and hashtags. Third-place Etihad Airways maintains multiple Twitter pages: a main page, a Twitter dedicated to “guest affairs,” and a premium Twitter channel (only for members of their elite programs) that promises special perks such as five-minute response times. 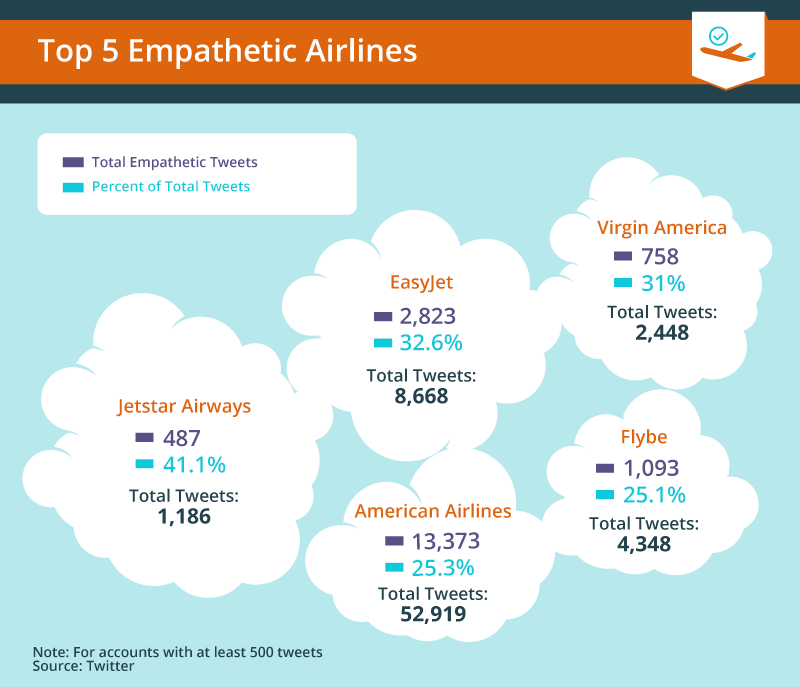 When it comes to replying to customers on Twitter, airlines have no shortage of empathy. Faced with customers’ grievances, many airlines often tweet responses such as, “We’re sorry you feel this way” or “Our apologies.” We analyzed tweets to see which airlines come out on top regarding empathetic words. The result? Jetstar Airways had the highest percent of empathetic tweets, followed by EasyJet and Virgin America. 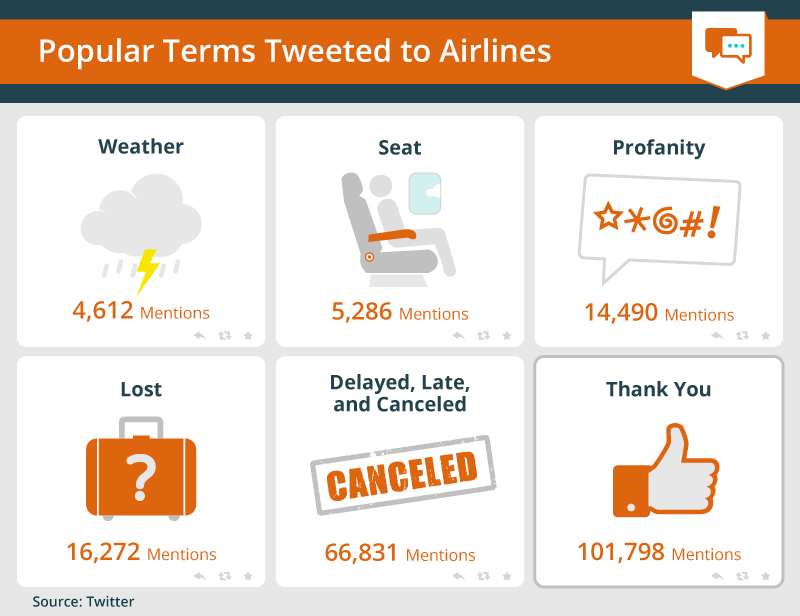 Finally, we wanted to get an idea of the types of messages travelers are tweeting to airlines. “Thank you” topped the list, at nearly 102,000 mentions. Not surprisingly, the terms “delayed,” “late,” and “canceled” make a strong showing too – to the tune of nearly 67,000 mentions. The word “lost” appears more than 16,000 times. Profanity features heavily as well, with nearly 15,000 mentions – illustrating the fact that some travelers’ tempers can flare during stressful situations. The term “seat” came up in more than 5,000 tweets, and “weather” was mentioned in more than 4,600.

There’s a high likelihood of encountering at least some type of frustration during a trip on commercial air travel. Perhaps your flight will be delayed or canceled, you’ll encounter long lines at security, or you won’t get the meal you wanted. But before you take to Twitter to vent, you may want to first consider whether you could simply contact customer service directly instead. If you do choose to tweet, it’s best to keep your message brief, factual, and professional in tone. Explain the situation, and if applicable, identify the outcome you hope for. Remember that there’s no privacy on Twitter – and anyone can read and retweet your message. Also, tweets can have real-life consequences: Just ask the man who was removed from a commercial flight after tweeting a complaint about a rude agent – and had to delete the tweet before being allowed to reboard. If you want to skip the challenges of commercial air travel, consider taking a charter jet. Thanks to the relaxing atmosphere and luxurious touches such as catered meals, the only thing you’ll have to tweet is envy-inducing photos.

Using 1.3 million tweets collected between November 20, 2015 and January 9, 2016 that contained an airline Twitter handle, we were able to look at the dates tweets were posted, how quickly airlines responded to travelers, and common terms mentioned in tweets directed toward airlines. We used this date range to ensure a large sample size of tweets.

This analysis should not be interpreted as an indication of the quality of any particular airline or their service, nor does it attempt to endorse or condemn the performance of any airline. The specific calculations used in our analysis were based on tweets collected from Twitter between November 20, 2015 and January 9, 2016.