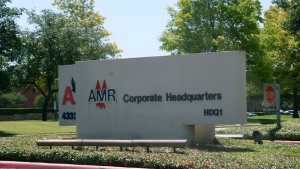 On November 29, 2011, AMR Corporation, the parent company of American Airlines, announced that it was filing for Chapter 11 bankruptcy protection as it attempts to cut costs and unload massive debt accrued from years of high fuel prices and labor struggles.

Long a subject of bankruptcy speculation, American Airlines resisted the move even as each of its rivals filed for bankruptcy in recent years to cut costs – particularly their labor expenses. As recently as October, it was reported by NPR’s Wade Goodwyn that corporate executives said that even though American Airlines was struggling and losing money, they still thought it could avoid going into Chapter 11 – the last legacy commercial carrier that hadn’t already done so.

However, the Fort Worth-based AMR Corp. has suffered financial losses in eight of the 10 previous years, and in 14 of the last 16 quarters, leaving it with no other options. AMR reported that there was no single factor that led to the bankruptcy filing, although it did cite the overall need to cut costs in view of the weak global economy and high, volatile fuel prices. The average price of jet fuel has gone up more than 50 percent in the past five years.

AMR also said that labor-contract rules forced it to spend at least $600 million more per year than other airlines. Increased borrowing needed in light of the eyebrow-raising order of 460 new Boeing and Airbus aircraft in July certainly factored into the decision as well. Saddled with heavy debt and continuing losses, AMR is expected to post a net loss of $1.1 billion for the 2011 fiscal year. The corporation said in its statement that it is taking this step “to achieve a cost and debt structure that is competitive in the airline industry.”

Thomas Horton, recently elevated to the roles of Chairman and CEO of American to replace departing chief Gerald Arpey, said that AMR has begun the legal process of bankruptcy in order to compete with large rivals such as Delta Air Lines and United Airlines, adding that American “must address our cost structure, including labor costs.”

As recently as 2008, American was the world’s biggest airline, but has fallen to the third largest behind United and Delta after those two companies bought other airlines. Both United and Delta filed for Chapter 11 themselves in recent years, with United exiting bankruptcy in 2006 and Delta following in 2007. AMR Corp. has continued to lose money while these two and other U.S. airlines returned to profitability over the past two years.

Although AMR says that cash reserves should be sufficient to conduct “normal” business operations in the near future, many commercial passengers have concerns about what happens next if they fly with American. Although the corporation insists that there will be no impact on travelers for now, one has to wonder what this means for their level of service and the number of routes and flights they are going to offer in the future.

Horton said that as the corporation goes through restructuring, it will be “operating normal flight schedules, honoring tickets and reservations as usual, making normal refunds and exchanges, and that its frequent flyer program will not be affected.” However, it should be noted that other carriers have responded to their bankruptcy filing in the past by cutting back considerably on the number of flights and routes that they offered. Horton did mention that American will reduce their flight schedule “modestly.”

But even a modest reduction would be significant considering that American Airlines operates more than 3,300 flights daily, and provides service to about 240,000 passengers per day. A renewed focus to ensure that every flight is filled to utmost capacity going forward is a major part of American’s future plans to address their planned cutback.

American Eagle Holding Corp., their regional airline operation, also filed for bankruptcy as part of the proceedings. Disruptions or cutbacks in American Eagle operations have even more direct impact on consumers that fit within the jet charter demographic, as this subsidiary provides routes to many smaller, regional airports not serviced by the far larger American. Talk of abandoning smaller cities entirely – by both American and American Eagle – is certainly on the table.

Negotiations with their labor unions to reduce labor costs to more competitive levels is the key imperative in this restructuring process, and will also prove challenging. It is likely that fewer employees will be expected to be responsible for more work as part of any new agreement, which could lead to lower levels of customer service satisfaction.

As anyone who has recently flown commercially could tell you, commercial travel is already a hassle. There are the TSA security lines that wrap around the terminal, with all the inconveniences of going through screening, taking off your shoes and taking out your laptop, emptying your pockets. There is the extra charge for checking luggage, boarding early, or even getting a sandwich. Other surcharges rack up too, so much so that travelers often have no idea what a flight will truly cost before they book. There’s the total lack of legroom and the crowded cabins, especially during the busy holiday season.

The convenience and flexibility of air charter really is apparent when you consider the commercial flying alternatives. When utilizing business aviation, executives can spend the minimum amount of time necessary to get from point A to B and back again, instead of wasting an entire day going through the hassles and headaches of today’s commercial travel “experience.”

Those considering air charter need to also take a minute and think what each hour of the day is worth to today’s C-level executive or senior manager, and be sure that number is calculated into the total cost of commercial travel. It’s a very real, tangible cost that should be accounted for.

With private jet charter, these executives can travel in the utmost comfort while also conducting meetings or working on the plane if desired, an option not available on cramped commercial flights. This further increases the value of the private charter to both the individual and company. Flight delays and cancellations are also common with commercial flights, but minimal with private charter – which means you’re far less likely to miss an important meeting or a special event with family or friends.

The bankruptcy of American Airlines creates the potential for even fewer commercial flights, on more crowded planes, and with fewer employees to provide you with the high level of service you deserve. This is just one more item in a growing list of concerns that makes commercial travel an even-greater inconvenience and frustrating experience.

Now more than ever, you should consider chartering a private jet with Stratos Jets. Grant us the opportunity to quote your next flight. You can contact one of our expert private flight advisors today who can help you take advantage of the benefits of private aviation.