Celebrating the True Meaning and History of Thanksgiving 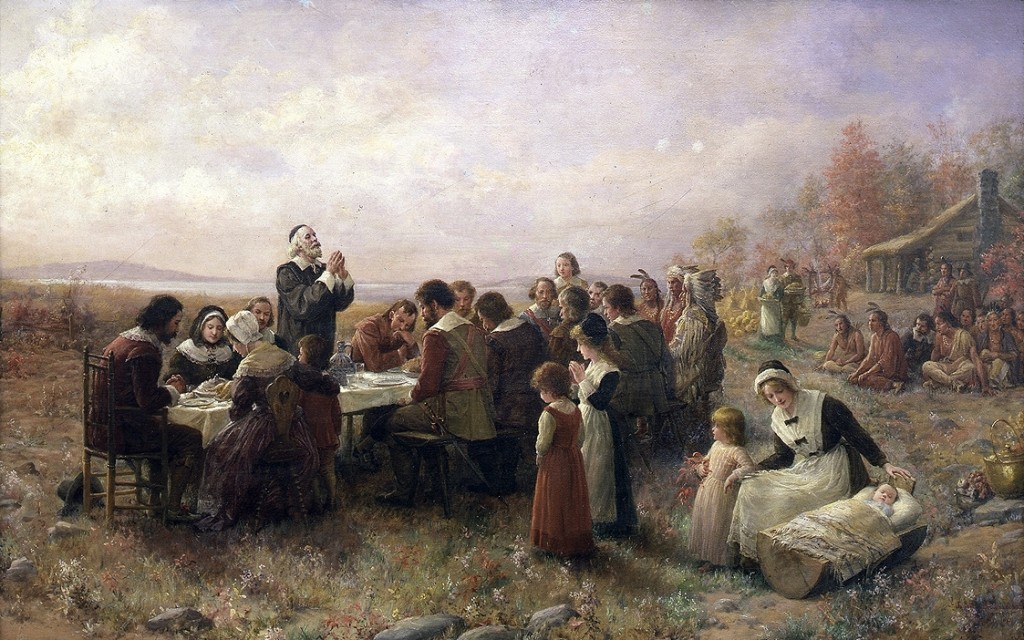 As I make my preparations for the upcoming Thanksgiving holiday, I often find myself reflecting on the true meaning of our national holiday. We all know that Thanksgiving is a day of celebration; a time to give thanks for the freedom, liberties and opportunities we have here in the United States. However, when I think back on past Thanksgiving celebrations, I often wonder why we sometimes forget to thank God first for our nation’s growth and prosperity.

At Thanksgiving dinner, most of us gather around the table to thank the Lord for His blessing. We bow our heads to give Him thanks and praise for the food he has provided us, and the good health and prosperity of our family and friends. While giving thanks for our good health and fortune is a very important part of Thanksgiving, we often forget to give thanks for the blessings and guidance our Lord has given our country; the very blessings that have helped shape every aspect of our great nation.

When I have reflections like these around Thanksgiving time, I am often reminded of a story I once heard about the first Thanksgiving celebration, shared in a broadcast by Rush Limbaugh. If you are one of the many avid readers of The Getaway, you may recall the story from last year’s Thanksgiving issue. I should also make it clear onc e more that I don’t share this story to be controversial. Even if you aren’t a big fan of Rush, I personally believe that this story teaches a valuable lesson that we can ALL benefit from at Thanksgiving time, now more than ever.

In the story, Rush explains the history of the first Thanksgiving in great detail, or at least in more detail than most of us remember from our elementary school lessons. Here is a summary of his tale, complete with some excerpts from his broadcast:

According to Limbaugh, the genesis of the first Thanksgiving began on August 1, 1620, when the Mayflower first set sail to the New World. The ship carried a total of 102 passengers, including forty Pilgrims led by the legendary William Bradford. During the long journey, Bradford established the Mayflower Compact, a social contract that established the Pilgrims as a unified community, irrespective of each member’s religious beliefs.

The Mayflower Compact provided the early settlers with a basis for government. Where did the revolutionary ideas expressed in the Mayflower Compact come from? The Bible. After all, the Pilgrims were devout followers of the teachings of the Old and New Testaments. The Pilgrims looked to the ancient Israelites for spiritual guidance and because of the biblical precedents set forth in the Scripture, they never doubted that their experiment would work.

After a very long, arduous journey to the New World, the Pilgrims finally landed in New England in November, 1620. According to Bradford’s detailed journal, what they found was a “cold, barren and desolate wilderness.” They had no food and no shelter, and the sacrifice they had made for freedom was just beginning. During the first bitter winter, half the Pilgrims, including Bradford’s own wife, died of either starvation, sickness or exposure.

When spring finally came, the Indians taught the settlers how to plant corn, fish for cod and skin beavers for coats. Life improved greatly for the Pilgrims, but they still did not prosper. This is where modern history books leave off. Thanksgiving is actually explained in some textbooks as a holiday for which the Pilgrims gave thanks to the Indians for saving their lives, rather than as a devout expression of gratitude founded in the tradition of both the Old and New Testaments.

Here is what history books omit: Before the Mayflower set sail in 1620, the Pilgrims entered into a contract with their merchant-sponsors in London that called for everything they produced to go into a common store. Each member of the community was entitled to one common share. All of the land they cleared and all of the houses they built belonged to the community as well. Everything was distributed equally and no one owned anything.

What the Pilgrims soon discovered from this collectivism was that the most creative and industrious people had no incentive to work any harder than anyone else, unless they could utilize the power of personal motivation. As a result, no one worked harder to produce more food for the community and the Pilgrims suffered from hunger and disease.And Bradford, now the new governor of the colony, quickly recognized that this form of collectivism would be as costly and as destructive to the Pilgrims as the first harsh winter. He decided to take quick action. He assigned a plot of land to each family to work and manage, thus turning loose the power of the marketplace.

Each family was assigned its own plot of land to work and permitted to market its own crops and products. What was the result? “This had very good success,” wrote Bradford, “for it made all hands industrious, so as much more corn was planted than otherwise would have been.”

In no time, the Pilgrims found they had more food than they could eat themselves. So they set up trading posts and exchanged goods with the Native Americans. The profits allowed them to pay off their debts to the merchants in London. And the success and prosperity of the Plymouth settlement attracted more Europeans and began what came to be known as the â€œGreat Puritan Migration.”

The Pilgrims new system of governance and economy was essentially a birthplace of free market capitalism, allowing them to produce more than they could consume. So they invited the Native Americans to dinner, and gave thanks for all the plenty, which is the true story of Thanksgiving.

For the Pilgrims, that was what the first Thanksgiving was all about: thanking the Lord for His blessings and guidance during the first hard winter in Plymouth. And that is also what I and Stratos Jet Charters are most thankful for this year: the opportunity and ability to pursue excellence in our spiritual lives, personal relationships and business endeavors.

We would like thank each of you, the invaluable clients of Stratos Jets, who we seek to continually build strong relationships with as, we work together to accomplish your financial, personal and business goals. May your Thanksgiving and Holiday Season be a blessed and plentiful one, from all your friends here at Stratos Jet Charters.