How to Avoid Charter Flight Delays Due to Aircraft Icing 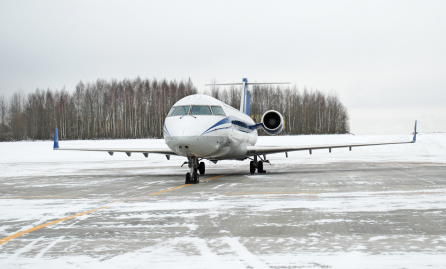 We’ve shared with you the dangers of ice on your private jet aircraft before, as it hazardously weighs the plane down, while disrupting the air flow over the wings and reducing its lift capacity. In-flight, aircraft ice is capable of detaching and jeopardizing jet engines if ingested, causing another major concern when flying in freezing conditions. This is the reason why the Federal Aviation Regulations state an aircraft cannot take-off if there is snow, frost or ice present on the wings, tail or other critical surfaces of the aircraft. Aircraft icing is hazardous, not to mention costly and time-consuming, but it is avoidable. There are several things that can be done to reduce the need to de-ice your aircraft, with the most effective being the stowage of your charter jet in a heated hangar. When an aircraft is parked on the tarmac in cold winter conditions, snow, frost or ice is likely to accumulate on the critical surfaces mentioned and require de-icing. De-icing usually consists of spraying your aircraft with a fluid similar to antifreeze that lowers the freezing point of ice, and depending on the size of the aircraft and the volume ice frozen on your aircraft this process could take as little as a few minutes to several hours. During that time, you will have no other choice but to wait for airport personnel to de-ice your aircraft. Once your aircraft is completely free of ice, you will have a short 15-minute window to take-off from your location. Because de-icing fluid is quite expensive, especially when addressing the ice formed after a severe Nor’easter for example, a hangar rental can be a very cost-effective alternative, and a way to protect against both the high cost of de-icing your charter jet aircraft and lengthy flight delays. You can also avoid aircraft icing by always arriving early or on-time at your departure airport. This is because your fixed-based operator will likely move your charter aircraft onto the nearest ramp for your convenience. Arriving a few minutes early or on-time allows for less time for the aircraft to accumulate snow, frost or ice on its surface, and can help prevent costly de-icing charges prior to take-off. Chartering a flight which is scheduled to depart an hour earlier than usual is another good technique to accommodate for potential de-icing delays when winter weather conditions are expected. Working with an expert private flight advisor like those at Stratos Jets who can accurately predict the potential threat of aircraft icing can also prevent icing delays and costly de-icing fees. We can usually reserve a heated hangar for your jet charter aircraft before arrival at your destination. Another option is re-routing your flight to a convenient alternate airport with available hangar rental space if it is unavailable at your original destination, or an airport that has more favorable weather conditions. Working with an experienced Stratos Jets private flight advisor, arriving on-time, utilizing hangar services, and scheduling your flight a bit earlier than usual can help you avoid costly de-icing fees and minimize your flight delays during the upcoming cold weather season.