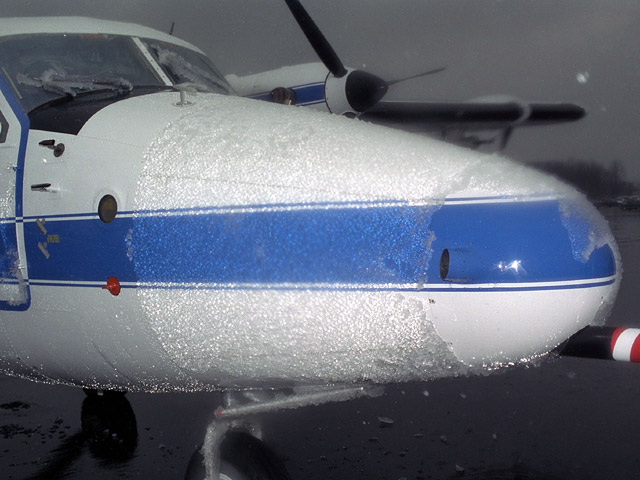 Aircraft icing occurs when moisture in the air freezes, turns to ice, and accumulates on the surface of a private aircraft. Icing can occur anywhere, at any time, but it generally occurs more where is plenty of moist air and freezing conditions. Aircraft icing poses a serious threat to jet charter flights because it disrupts the smooth flow of air over an aircraft. Aerodynamically speaking, this causes a significant reduction in your aircraft’s ability to generate lift, and increases the amount of drag on your aircraft. In terms of safety, aircraft icing can cause your pilots to lose control of your aircraft, endangering your personal safety.

Stowing your charter jet in a heated hangar is perhaps the most effective way to prevent aircraft icing. If you leave your private jet parked on the tarmac (in freezing cold conditions where there is moist air), snow, frost or ice will likely accumulate on the surface of your aircraft. Under Federal Aviation Regulations, you are not allowed to take-off in an aircraft if there is snow, frost or ice on the wings, tail or other critical surface of the aircraft. If ice does accumulate on your aircraft, de-icing is the only way you can safely and legally depart from your location.

As a rule, de-icing fluid is very expensive, but the cost of de-icing ultimately depends on the size of your aircraft and the severity of the icing. After a light snow flurry, for example, de-icing your jet may only cost you a few hundred dollars. After a severe Nor’easter that lasted a few days, however, de-icing could cost well into the thousands of dollars. Hangar rentals, on the other hand, can cost anywhere from $250 to $500 per night, depending on the size of your aircraft. A good way to think of hangar rentals are as an investment or protection plan against the high cost and expense of de-icing your charter jet aircraft.

Another way to avoid aircraft icing on the ground is to always arrive early or on-time at your departure airport. Before you arrive at the airport on the day of your charter flight, your fixed-base operator will usually move your aircraft out of the hangar onto the nearest ramp for your convenience. The longer you leave your aircraft waiting for you outside, the longer it has to accumulate snow, frost or ice on its surface. Arriving on-time or just a few minutes early can help prevent aircraft icing and save you thousands of dollars in de-icing bills.

Working with an expert private flight advisor who can accurately predict the potential threat of aircraft icing can also prevent icing delays and costly de-icing fees. At Stratos Jet Charters, our air charter consultants are expertly trained to know when and how to avoid aircraft icing. In the event your destination airport reports icing conditions, our private flight advisors can typically reserve a heated hangar for your charter aircraft. If hangar rentals are unavailable, our agents can typically arrange for your charter flight to land at an alternate airport with hangar services or less-prevalent icing conditions.

By working with a Stratos Jets private flight advisor, arriving on-time, or utilizing hangar services, you can successfully avoid the potential threat of aircraft icing and costly de-icing fees this winter season.