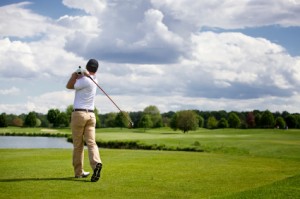 For those private jet charter travelers seeking world-class golf in an easily accessible U.S. Destination this year, they need look no further than Dublin, OH on October 3-6, 2013. The President’ Cup of Golf is taking place at the Jack Nicklaus-designed Muirfield Village Golf Club, with the event site selected to honor him. Fred Couples and Nick Price have been named as the captains of the U.S. and international teams respectively.

The match play format scoring system of the event was drawn from the Ryder Cup. The non-playing captains are responsible for pairing their 12 man teams in doubles events, which consist of both alternate shot and best ball formats, and then in singles matches. Each player is required to play in every session of matches except those held on Saturday. This format was designed to prevent teams from hiding weaknesses, which is often done in the Ryder Cup which doesn’t require as much participation from the whole team. This also makes for gripping golf and thrilling Sunday finishes quite often.

Dublin is a suburb of Columbus, OH, with those flying in often utilizing Bolton Field (TZR), an easily accessible corporate airport located 8 miles from the central business district of Columbus. The airport is designated as a reliever for the nearby and much larger Port Columbus International Airport (CMH). Check out the outstanding Columbus Museum of Art, the Kelton House, Franklin Park Conservatory and many other world-class landmarks as well as shopping and fine dining during your visit.

We specialize in private jet charters to all destinations worldwide domestic and international, including private jet charter flights in Columbus, OH for the 2013 President’s Cup. Air charter experts are ready to assist you 24 hours a day 7 days by calling (888) 593-9066. Let us provide a quote on your next jet charter itinerary, and give us the opportunity to give you the type of exemplary value, service and convenience that will have you raving about Stratos Jets to your friends and business colleagues.