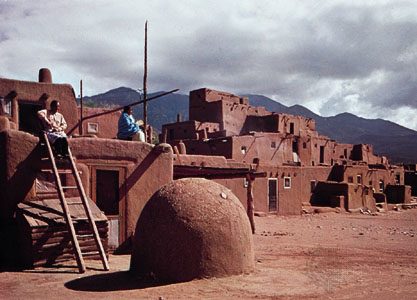 You’ll step into living history when you take a jet charter to Taos Pueblo, New Mexico. This is one of the most unique jet charter trips you can experience. Taos Pueblo (or Pueblo de Taos) is an ancient, sovereign community of Native Americans who live in a 1,000-year-old settlement of traditional adobe structures. They welcome you to get to know their way of life.

Why Take a Jet Charter to Taos Pueblo?

As one of the best jet charter destinations, the Taos Pueblo is both a National Historic Landmark and a World Heritage Site designated by UNESCO. The high-rise village is made up of multi-stored adobe dwellings and ceremonial buildings, and covers 9,000 acres, 7,200 feet above the base of Taos Mountain in Taos, NM (about 1.5 hours north of Santa Fe). The current buildings at Taos are estimated to have been constructed between 100 and 1045 BCE. All buildings are formed from adobe, a sun-dried mixture of dirt, water and straw. This natural building material is combined with viga (large wood timbers) to support each structure’s packed-dirt roof. Houses are stacked five or six stories high, and were originally built without windows or doors (entry was made via holes in the roofs). Because the community is deeply-rooted in tradition, electricity and running water are forbidden inside the village. Built in 1850, the village’s gorgeous San Geronimo Chapel is one of the most popular destinations for travelers by jet charter to Taos Pueblo. Located just inside the entrance, San Geronimo (or St. Jerome) Chapel was built to replace the original Taos chapel, which was destroyed by the U.S. Army in 1847 during the Mexican-American War. More than 90 percent of the Taos people are Catholic, making this chapel a revered religious site for the entire community. Approximately 150 Taos Indians live within the village full-time, while 4,500 people total either live near the reservation or maintain part-time residency within the Taos Pueblos. The Taos peoples are known as one of the most secretive tribes in existence. The population represents the historic traditions of the Pueblo Indians of both New Mexico and Arizona. Most residents speak the native language of Tiwa, as well as English and Spanish.

Although the Taos Pueblo’s tradition of privacy restricts members from divulging details about their historic rituals and ceremonies to foreigners, those who take a jet charter to Taos Pueblos can still experience the ancient culture by mingling with residents in Taos Plaza, exploring the stunning adobe architecture, visiting various family-owned shops, and seeing the villagers’ traditional arts and crafts.

Taos residents depend on trade with tourists as their economic livelihood. For this reason, many are exceptionally skilled in artisan crafts, such as pottery, leatherwork (drums and mocassins), and jewelry. If you choose to take a jet charter to Taos Pueblos on a feast day, you can also enjoy songs and dances that have been passed down over centuries.

In addition to experiencing the history and culture of Taos Pueblos, you can hike the Rio Grande Gorge, gamble in the Taos Mountain Casino, and see rock art created by multiple Indian tribes over a span of 7,000 years. Good skiing in Taos Ski Valley is also a popular reason to visit Taos, NM.

The Taos Pueblo welcomes visitors on a daily basis from 8 am to 4:30 pm. The village is closed for only 10 weeks during the year, from later winter to early spring, and during special tribal rituals. An agent at Stratos Jet Charters will speak with a Taos representative on behalf of any travelers who want to take a jet charter to Taos Pueblo during these questionable time periods.

Although Taos Pueblo does not allow electricity or running water, nearby cities do. Travelers by jet charter to Taos Pueblos can stay in surrounding hotels, such as the El Pueblo Lodge, comfortably andÂ conveniently.

You can travel at the height of luxury and comfort when you fly via private jet to Taos Pueblo with Stratos Jet Charters. Let our full-service concierge take care of all your other travel needs as well, such as arranging luxury ground transportation for you and your party, hotel and restaurant reservations, in-flight catering, and so much more. When taking a jet charter to Taos Pueblo, the closest airport is the Taos Regional AirportÂ (TSM), which is located only a few miles north of the Town of Taos on Highway 64. The airport is under the direct management of the Town of Taos, providing a convenient link to Taos Pueblo. You can also opt to fly into Albuquerque International Sunport (ABQ), which is located 135 miles south of Taos in Albuquerque, NM. Stratos Jets works hard to ensure that your travel with us is comfortable, convenient and safe. We arrange travel to all destinations, both domestic and international, with as little as four hours’ notice, and we look forward to serving your private jet charter needs while showing you the Stratos Jets difference. Please call one of our jet charter experts today at (888) 593-9066 to quote your next jet charter to Taos Pueblo or anywhere else on the globe.