For almost as long as cell phones have existed, airlines have banned people from using them on board commercial and private jet airplanes. And while there was always that one passenger trying to sneak a last-minute phone call or finish a game of solitaire, the FAA kept its restriction in place for over 20 years. However, as of late 2013, tech-savvy travelers need to sneak no more: The FAA voted to approve gate-to-gate use of personal electronics, including cell phones in airplane mode, and the change has been trickling down into airline protocol. The result? You’re free to snap selfies the whole flight long and even upload them immediately to your preferred social media sites (via Wi-Fi-enabled planes). To keep on top of air-travel trends, we scoured over 10,000 Instagram posts with the hashtag #onaplane. Want to up your plane portrait game? Keep reading to discover which filters and photo subjects garnered the most “likes” from fliers’ followers. 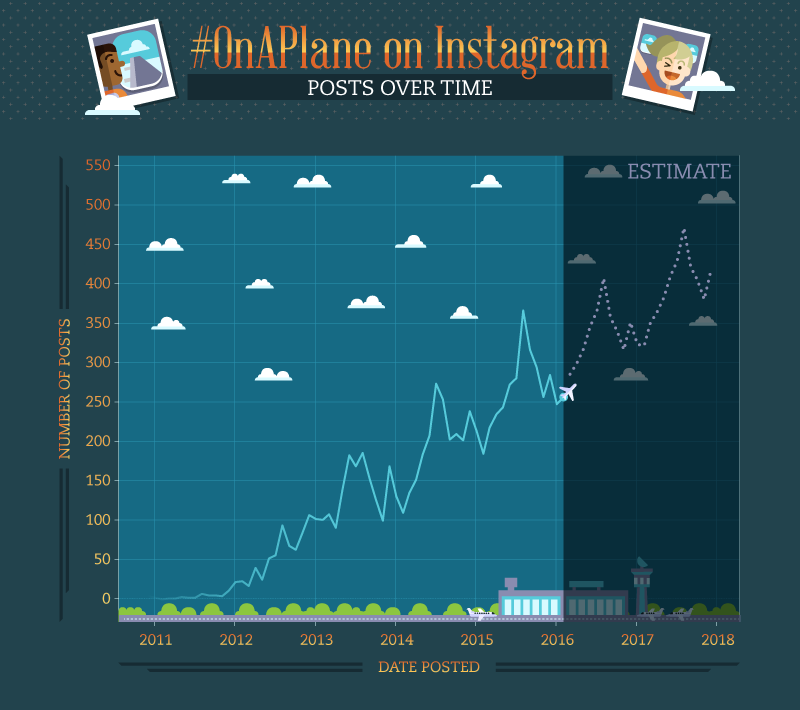 Looking at the prevalence of #onaplane posts over time, one thing becomes clear: Summer is prime for airplane pics, with use of the hashtag spiking heavily in June 2013, July 2014, and August 2015. This makes sense when you consider that summer is also the busiest time of year for airlines. A whopping 80 million flights jet to and from the United States in July alone. The overall upward trend also correlates with the fact that Instagram has continued to grow in users every year since its launch. 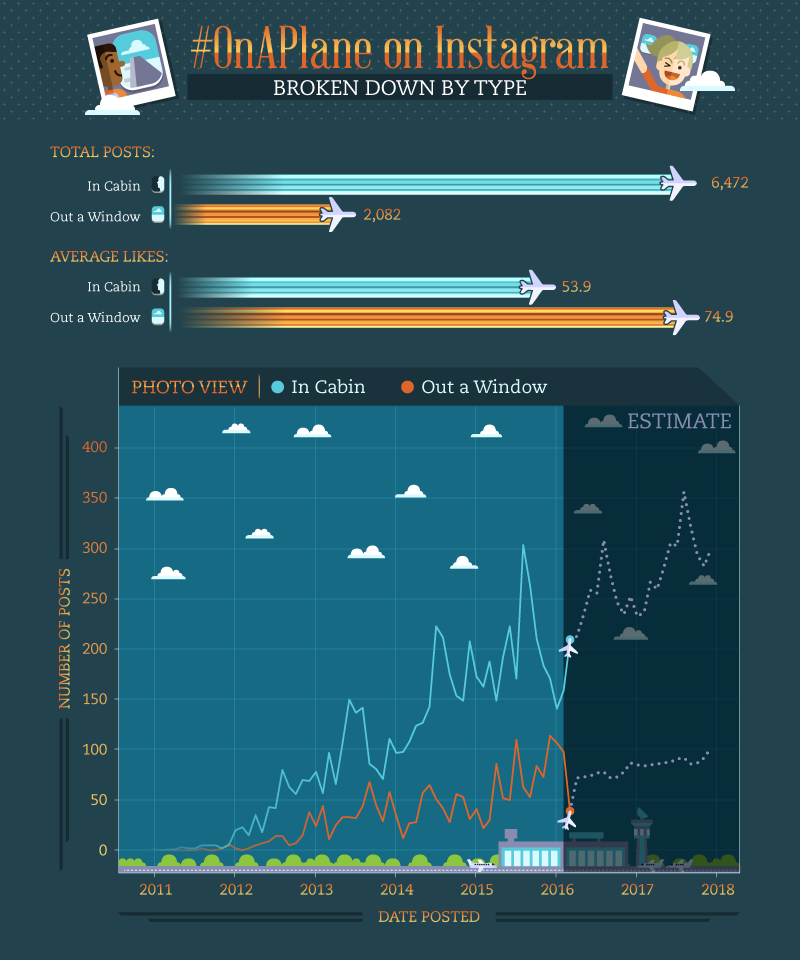 Wishing for a Window

Not all #onaplane posts are created equal. Users post pics within the cabin three times as often as they post photos from the window. However, aspiring Insta celebs, take note: Window shots in a plane average 20 more likes than ones taken in the cabin, and with good reason. Sixty percent of passengers prefer window seats to aisle or middle seats, so it only makes sense that they’d enjoy the same view when offered vicariously through a post. Additionally, people love what’s rare, so the fact that pictures out the window are less common could urge ’grammers to go gaga for them. Plus, there’s no denying that, at times, the view out the window of an airplane is nothing short of spectacular. 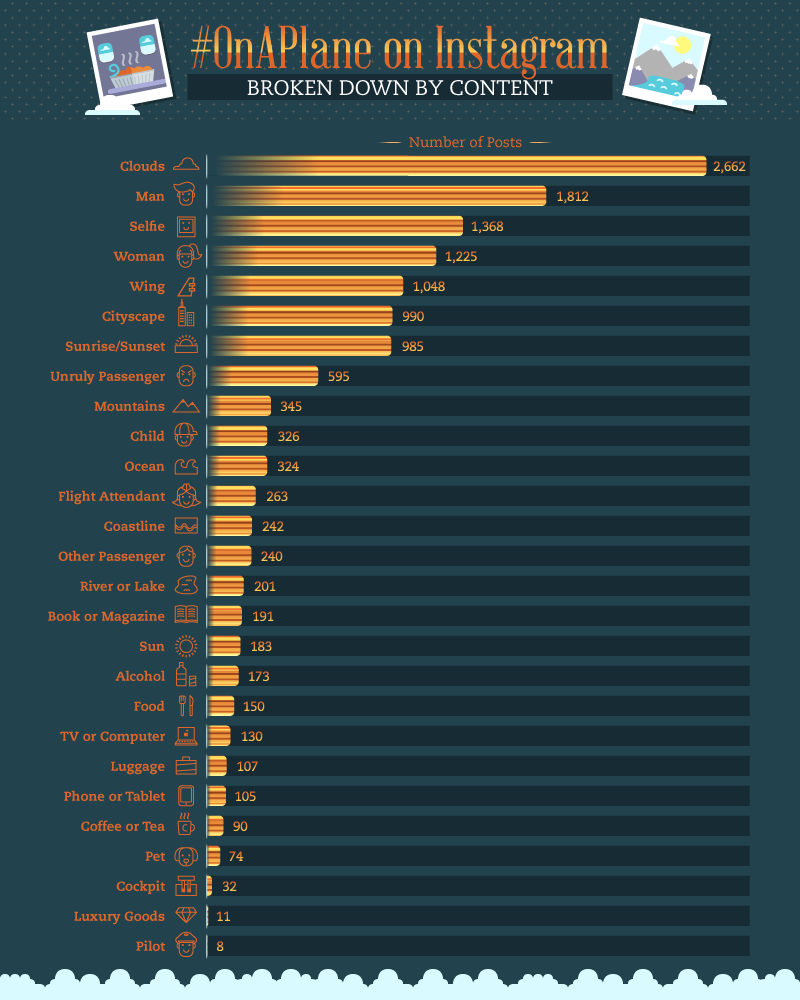 Snapshot in the Sky

So what are photo-happy fliers actually featuring in their pictures around the cabin or out of the plane window? Unsurprisingly, lots of clouds. At heights of up to 35,000 feet, there’s often not much more for passengers to see. However, the wing, cityscapes, sunrises, and sunsets also made the list. (Truth be told, airplane wings are actually a bit of an Instacliché.)

Within the plane itself, photos featured include people, with men taking top billing over women (despite the fact that they fly in roughly equal numbers); however, children and unruly passengers also popped up frequently. 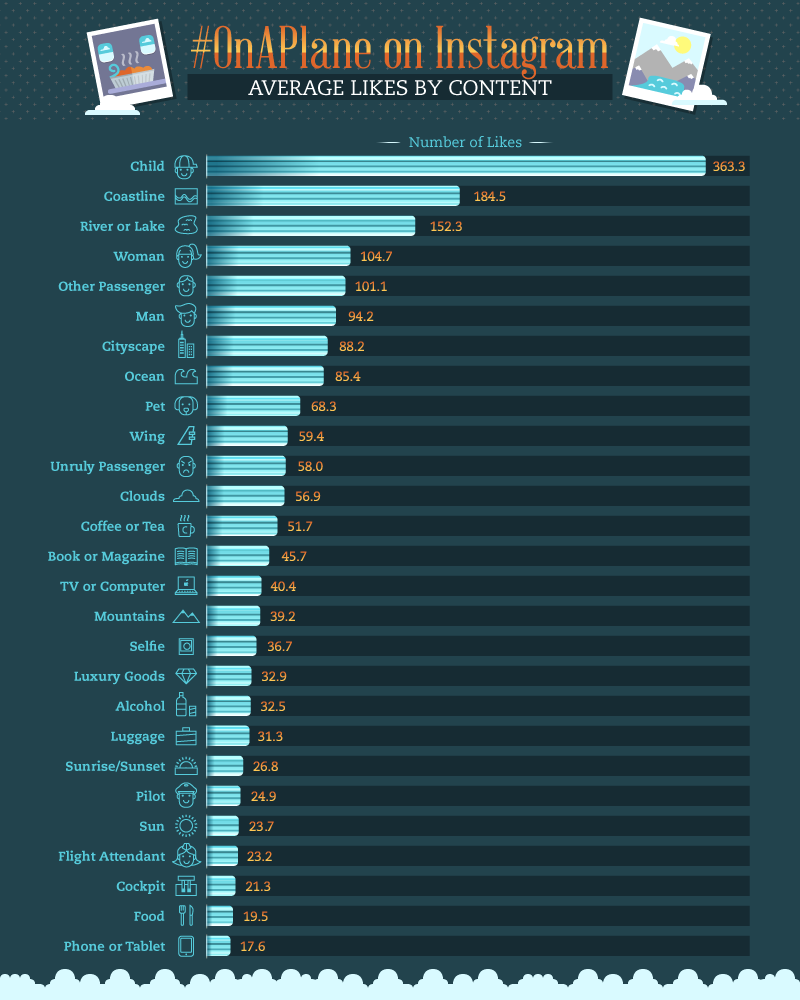 As illustrated in the window versus cabin debate, what people post is not necessarily what others want to see. While clouds were far and away the most posted #onaplane Instagram image, they rank 12th when measured by likes. Similarly, while travelers posted selfies in spades, selfies weren’t especially popular; they averaged about as many likes as images of computers or mountains. Surprising, really, when you see just how much fun some people have snapping selfies on a crowded plane!

What type of images ranked No. 1? Well, Instagrammers just love children on planes – probably because they have the luxury of liking their photos from the comfort of their own home as opposed to sitting behind a crying baby. So if you’re traveling with children, take a picture of them. The likes are quite likely. If not, your next-best bet is to take advantage of water views: Coastlines and rivers/lakes take second and third place for most likes. 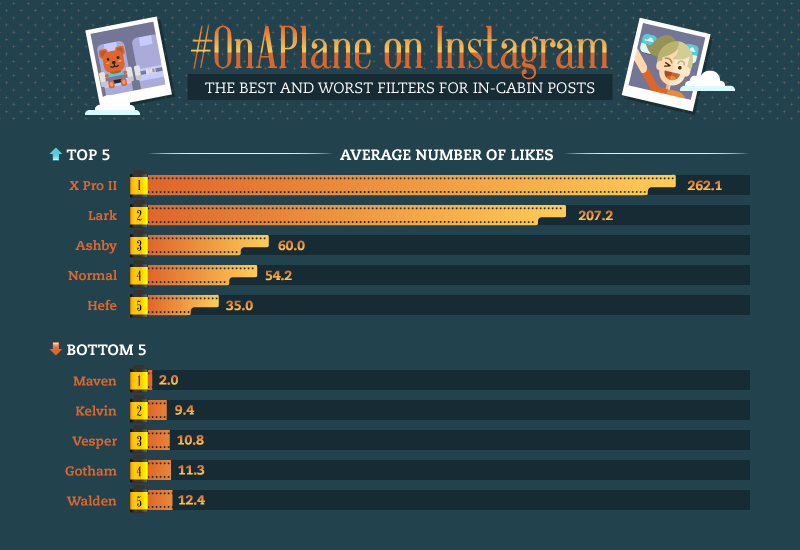 The next step in your quest to post the perfect #onaplane Instagram shot is to pick a filter. For in-cabin candids, we recommend X-Pro II or Lark, which outperform the next contender (Ashby) by more than 3 to 1. But before you you get footloose and fancy with the filters, consider that using no filter is still much better than picking the wrong one. Savvy posters would do well to avoid Maven, Kelvin, and other filters that find themselves in the bottom five. The last step is to take full advantage of the in-flight Wi-Fi and the FAA’s latest ruling on cell phones, and actually post the picture for your adoring fans. 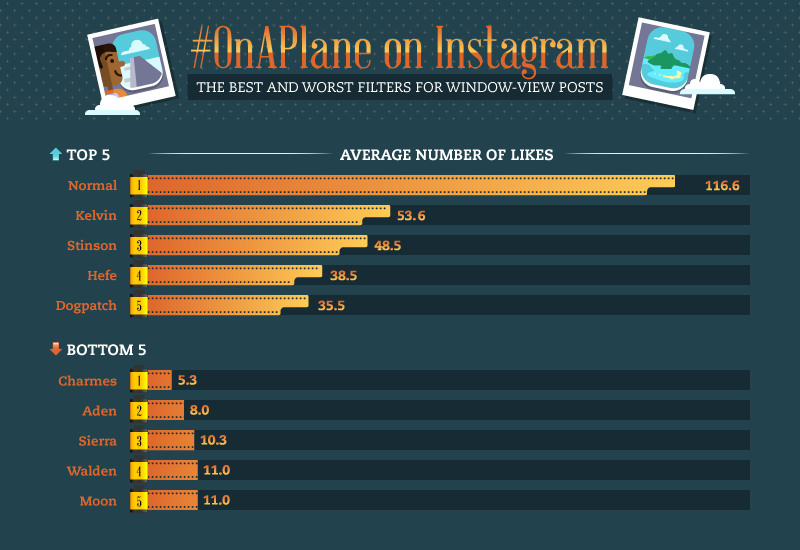 If you’re lucky enough to get a window seat and are wondering what to post, we’ve got you covered. Water is the name of the game here; coastlines, rivers, and lakes get lots of likes in out-the-window shots. If you’re not flying over water, you’ve got backups. Opt instead for a cityscape or the wing of the plane surrounded by picturesque clouds. The best part is, no filter necessary! Your shot will, on average, get more than twice as many likes without a filter than it would using one. You can also expect more than 20 times as many likes than if you used the Charmes filter, which followers apparently don’t find as charming as its name would suggest.

Wondering how the hashtag has evolved over time? Check out this cool GIF that shows how and where Instagram users have connected with each other using #onaplane posts! When the tag first appeared in May 2011, it was only used twice – both times in the United States. Two months later, in July, the first international #onaplane post was uploaded in Spain. In November of the same year, an Instagram user posted the first #onaplane image out of the window, from a vantage point overlooking Chicago and Lake Michigan. Two years later, in November of 2013, Instagram had grown to more than 150 million users, and Africa had its first post using the hashtag. Today, people are posting #onaplane everywhere except Antarctica.

If you can’t beat ’em, join ’em! Cell phones and selfies are quickly becoming a staple on board airplanes, and tagging your travels with #onaplane keeps your friends, family, and followers in the know about where you go. Are you part of the 2.6 percent of the population that’s afraid of flying? Not to worry: The FAA’s ruling only applies to passengers – pilots are still required to keep their full attention on the skies and off their smartphones.

To inspect #onaplane on Instagram, we pulled every publicly available post. This yielded over 10,000 results. We then created a custom interface for Amazon’s Mechanical Turk, which users then utilized to select all appropriate tags for each image. We included a selection tool that allowed users to establish whether the image showed the interior of the plane, a view out of the window, or a shot of something that wasn’t on a plane at all. Images marked as “not on a plane” were omitted from the final results. While constructing forecasts for the future number of posts, we accounted for seasonal patterns occurring every 12 months.