It seems unbelievable now – but once upon a time, commercial aircraft and private jets were fueled by loud, fuel-guzzling turbojet engines. We’ve come a long way since the World War II era. Today’s turbofan-driven aircraft are quiet and fuel-efficient. To fully appreciate how far we’ve come (and how fortunate we are to have turbofan-driven aircraft for private jet charters), it’s vital to grasp the basics of both types of engines. 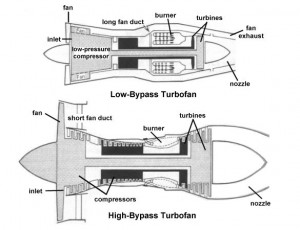 Illustration of a Turbofan Engine for Private Jet Charter Flights

At Stratos Jet Charters, we value education – and we’ve put in a great deal of time studying aircraft engines and comparing their advantages when it comes to private jet charters. All private jet engines operate differently – but most run by forcing air into a tube where it’s then compressed, mixed with fuel, burned, and exhausted at a very high speed in order to produce thrust. This basic operating principle is true of both turbojet and turbofan jet engines.

At the end of the 1930s, Frank Whittle of the United Kingdom and Hans von Ohain of Germany independently developed the oldest general-purpose jet engine – the turbojet engine. Some historians disagree about who technically invented the engine; however, most experts believe Whittle produced the original design while Ohain took the engine on its first successful flight. How does it work? The turbojet engine compresses air in a chamber, heats it, and lets it expand through a turbine and into a nozzle where it then accelerates to a high rate of speed. The concept itself is fairly simple; in fact, numerous aircraft during World War II employed this principle. Unfortunately, the rudimentary design and fast exhaust speed of the turbojet mean the engine is really too loud and not efficient enough for private jet charters.

On the other hand, the turbofan engine is ideal because it possesses high thrust and fuel efficiency capabilities. Turbofans run basically the same way turbojets do – however, they incorporate a fan component. Air comes in the engine through an inlet and passes through the fan; the rest travels to the burner to be mixed with fuel and ignited to generate propulsion. In contrast with turbojets, turbofans actually get their thrust from two sources: the fan and the engine core. The result? Turbofans have much less exhaust than turbofans, and they are much more efficient at subsonic speeds. Because the majority of charter jet flights operate at subsonic speeds, the turbofan is a better engine choice for a charter aircraft. In an aircraft with a turbofan engine, charter pilots can pull back the throttle to cruise, which saves hundreds of dollars on fuel during a flight. Knowing all this, it’s no surprise that the turbofan is the clear engine of choice for both commercial airlines and private jet charters.