Suits in the Skies: A Brief History of Corporate Flight

In 1886, science fiction author Jules Verne thrilled readers with the exciting prospect of heavier-than-air flight. The novel Robur The Conquerer proposed the outlandish notion that one day, dirigibles would be surpassed by powered flight. The world then had to wait until the Wright Brothers first powered flight in 1903. In 118 years since the Wright milestone, aviation has changed from a notion to a necessity.

If you have ever wondered how we got from wobbly two-person aircraft to advanced executive jets, here’s a brief history of corporate flight.

By the time the First World War ended in 1918, aircraft design had reached the point where passenger flight was feasible. It was still more lucrative to fly the mail in the 1920s, but carrying a few paying passengers would help offset costs. The ‘30s saw the rise of commercial passenger flights, with some corporations buying aircraft for executive use. Until the late 1950s, corporate flight consisted of converting a prop-driven passenger aircraft into a flying office with better seating, radio-telephones, typewriters, and other upscale amenities.

Private Jet Era in the USA

Until 1963, jet engines were used exclusively on commercial or military aircraft. The revolution came when Wichita entrepreneur Bill Lear introduced the first LearJet, a custom-built jet for domestic executive travel. Private jet popularity surged, both as means of swift corporate flight and as a status symbol. 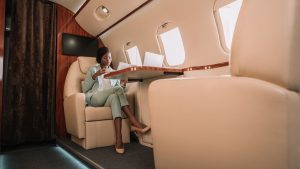 The phrase “jet set” was coined to describe those who had the means to fly anywhere, anytime in customized comfort.

From Elite to Accessible

In the sixty years since the first LearJet flight, the private charter jet industry grew exponentially. Stratos corporate clients can now book anything from an efficient 4-passenger turbo-prop to a 500-seat international airliner.

So, with so many competing manufacturers and charter agencies, how do you choose your next corporate flight?

In an ever-changing industry, focus on reliability. Stratos Jet Charter has been in business since 2006. We have a well-established charter network, extraordinary safety standards, and access to a broad range of aircraft for any charter mission. Our expert private flight advisors can help you book an executive flight, family getaway, or team tour.

Our industry has grown from single-passenger aircraft to an advanced network of flight specialists. But at its heart is the human desire to travel in safety, comfort, and speed through the sky.