Where Luxury Jets Fly: The World’s Most Gorgeous Airports

One of the many advantages of flying on luxury jets is you get to escape the lineups, the humdrum atmosphere and all that waiting around at dreary and uninspiring airports. However, even the most discerning travelers agree the rare charm, spectacle and architecture of these five airports will make you want to not just visit, but stay a while.

Terminal 4 at Barajas Airport is truly a marvel to behold. Measuring more than eight million square feet, it’s one of the largest terminals in terms of area. It’s also capable of handling 70 million passengers annually.

But it’s Barajas design, with its curved roof structure and the use of illumination that makes it such an attractive space. It uses glass panes instead of wall and vast skylights in the roof to allow natural light to filter into the open space inside.

In terms of engineering, Kansai Airport holds the undesirable distinction of being the most expensive civil works project in modern history. However, there’s no denying the style and sophistication imparted by architect Renzo Piano.

Opened in 1994 to relieve overcrowding at Osaka International Airport, Kansai is built on a manmade island (hence the $15 billion price tag). It required 20 years of planning and three years to construct. 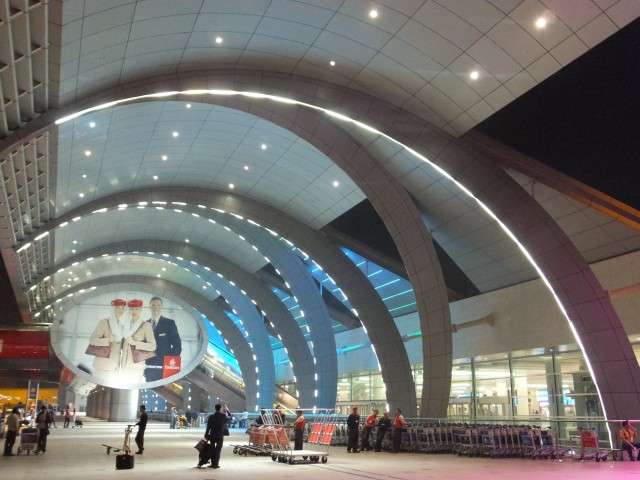 When it was completed in 2008, Dubai International’s Terminal 3 was the largest building in the world in terms of floor space. It still holds the title for the world’s largest airport terminal, measuring in at nearly 18.5 million square feet.

Second only to Dubai in size, Beijing’s Terminal 3 is the sixth largest building in the world by area and was built to handle the added traffic created by the 2008 Summer Olympics.

In terms of design, it receives plenty of natural light from skylights that tint white, yellow and red as you move along the concourse.

You might think you’re looking at the world’s largest circus tent, but no, that’s just Denver International Airport. However, it was voted ‘Best Airport in North America’ by readers of Business Traveler Magazine six years in a row (2005–10), and these are people who have experience flying on luxury jets.

The white fiberglass peaks are actually meant to represent the nearby Rocky Mountains.

If your travel itinerary is taking you overseas, you should read our post: Why Choose a Charter Plane for International Travel.

Are you looking to book flights on luxury jets? Stratos Jet Charters can easily arrange itineraries for worldwide air travel. Call us to start planning your next excursion—(888) 593-9066 (toll free) or request a quote online.