Destinations of the Rich and Famous

While you were pinned in a corner discussing the various health issues of your Auntie Muriel’s Pomeranian, wealthy people the world over were relaxing on white-sand beaches and flying off to France to actually enjoy their vacations. Want to be one of them next year? We searched geotagged Instagram posts and Internet celebrity sources high and low to compile the ultimate list of holiday travel destinations for the ultra-wealthy and uber-famous so that you can start planning now to join Taylor Swift on the ski slopes or hit up President Obama in his hometown for your next getaway. 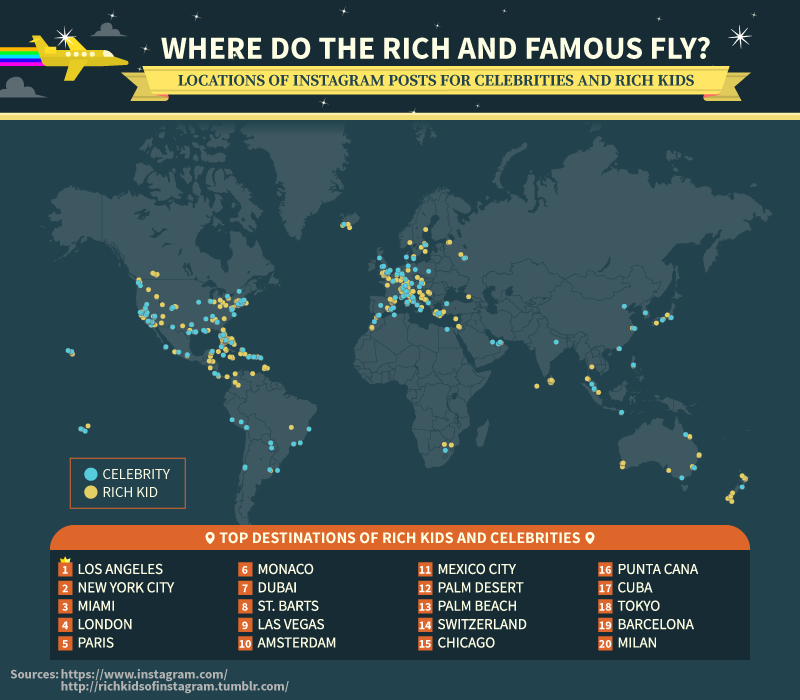 So where do celebs and the super-rich travel to the most? America. Seven of the top travel spots (including the top three) were cities in the good old USA, including Los Angeles, Las Vegas, and Chicago. But lest you think that the stars were trying to save money by hanging close to home. Four of the sites on the list – Tokyo, Paris, New York City, and London – all rank in the top 15 most expensive places to visit. 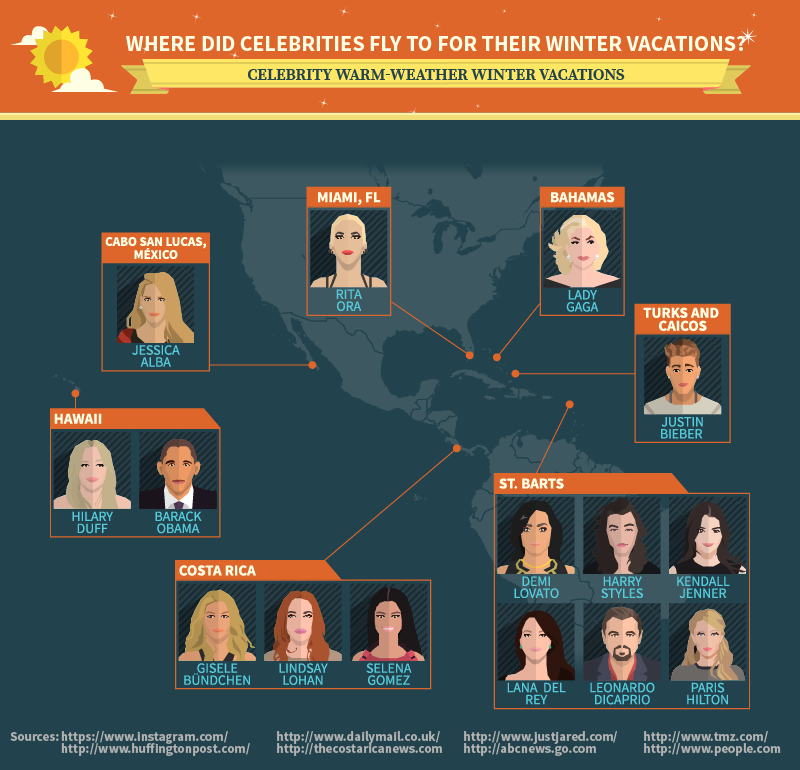 The French Caribbean island of St. Barts was an especially popular destination for warm-weather vacationers. Harry Styles, Leonardo DiCaprio, and a host of other celebrities flocked there. What makes this tiny island so popular with the elite? It’s secluded. The local population is just under 10,000 people. Plus, the locale receives no direct flights in from major airlines (they all stop on neighboring island St. Maarten). St. Bart’s is the epitome of the exclusivity that celebs crave. If you want something with a little more Latin flavor, follow Selena Gomez’s lead and book a trip to beautiful Costa Rica. The destination is renowned for its diverse wildlife, majestic volcanoes, and gorgeous beaches.

Really proud of ourselves over here. 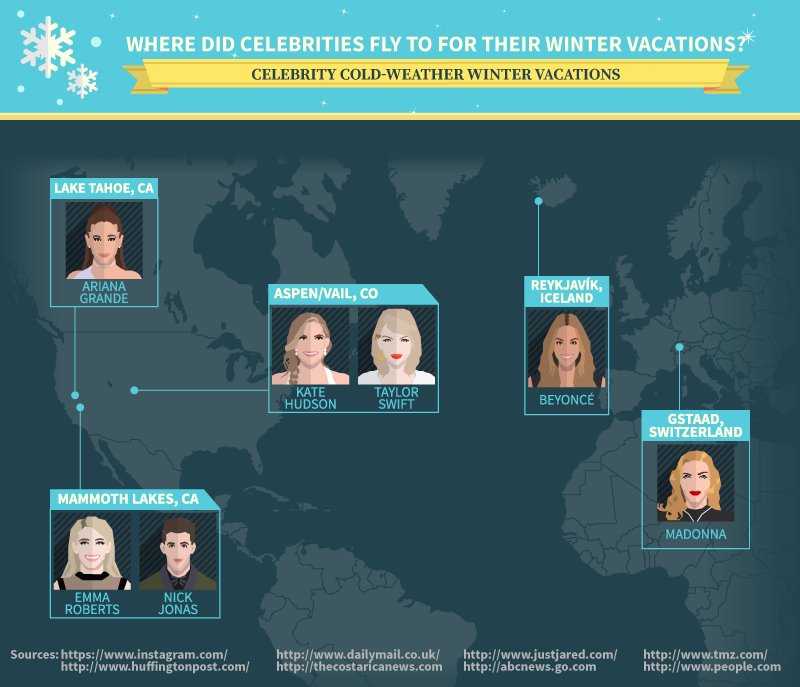 For those who like their winter vacations a little more wintry – the Western United States or the cold-weather wonders of Iceland offer perfectly cool hotspots. Mammoth, California, which attracted both Emma Roberts and Nick Jonas this past holiday season, has some of the best skiing in the state. It’s also under a five-hour drive or one-hour flight from LA. That means hard-working Angelenos can hit the slopes on Saturday and get back to the celebrity grind by Monday. Gstaad, Switzerland, offers an incredible view of the Alps for those (like Madonna) looking to get a little farther away. It’s home to five-star resort Gstaad Palace: a place where the wealthy can relax in style. 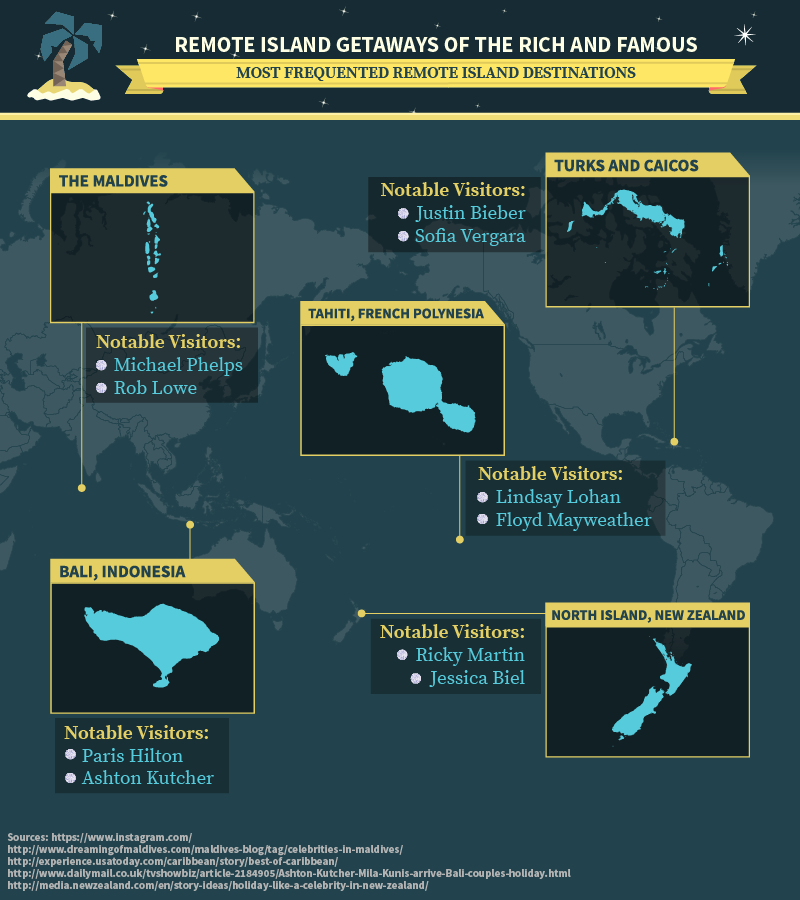 But for those who really want to escape their fame and fans (or just their Auntie Muriel), far-flung island getaways may be the ticket. Ask Michael Phelps and Rob Lowe, who made the Maldives their home for the holidays. The chain of islands in the Indian Ocean is a 25-hour flight and more than 9,600 miles away from Los Angeles. Another option? Live la vida loca with Ricky Martin and Jessica Biel on the North Island of New Zealand. At over 15 hours, the flight from Los Angeles is far from short. However, the Kiwi country will more than make it up to you with its breathtaking lakes, mountains, and tourable movie sets from the “Lord of the Rings” trilogy.

All in a Day’s Jet-Setting 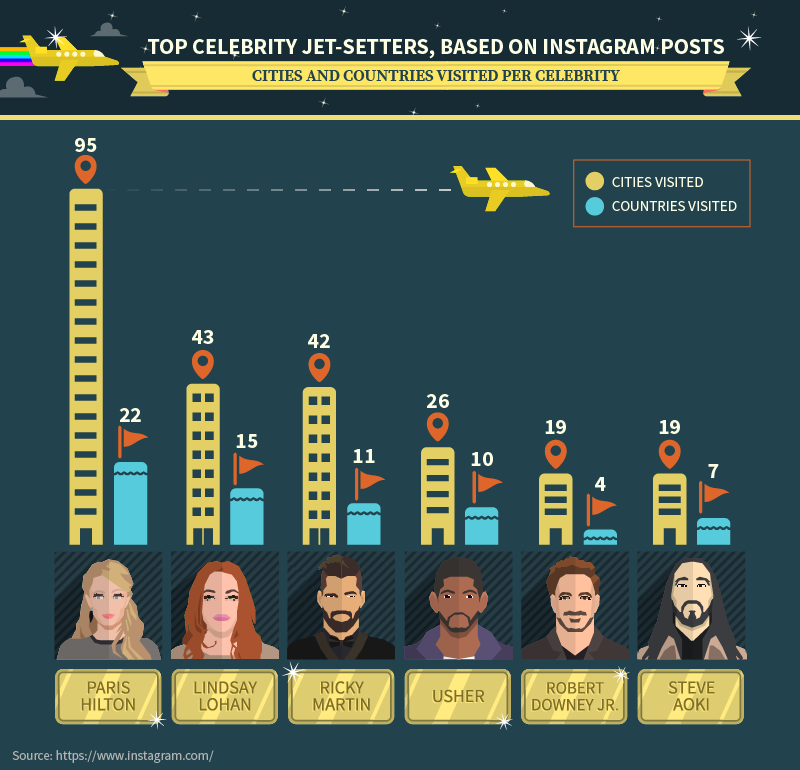 Curious which celeb earned their jet-setting status the most this past year? That would be none other than Paris Hilton. She visited a mind-boggling 95 cities and 22 countries in a period of 12 months. Much of her travel may have had something to do with her gig as the best new female DJ of 2015; her touring itinerary included locales as diverse as Spain, Colombia, and South Korea. In fact, music may be what kept most of these frequent fliers in the air so often. Usher, Ricky Martin, and electro-artist Steve Aoki also made the list.

Around the World in 50 Days

#BirthdayGirl landing in #Paradise. ðŸ‘¸ðŸ¼âœˆï¸ðŸŒˆ A photo posted by Paris Hilton (@parishilton) on Feb 17, 2016 at 2:00am PST

Want to see the staggering speed of Paris Hilton’s travel for yourself? Check out the video above. In just over 50 days, she crosses from London to Brazil to Spain and everywhere in between. She occasionally stops for stays longer than a week in Manhattan and Miami but bounces between the Los Angeles area and Switzerland other days. And while her DJ career may be part of the motivation, we’re guessing that free stays in any of the 93 countries where her family has hotels don’t hurt either.

Ready to start jet-setting like the stars? Private jets are the easiest way to travel in style and seclusion, and Stratos Jets is the best place to start. To find out more about our charter services and start planning your next getaway, visit our website today!

To create the list of celebrities, we pulled the top names from Iconosquare.com and searched for their Instagram usernames. We aggregated the list of rich kids from the site richkidsofinstagram.tumblr.com and collected their usernames and their rich friends’ usernames.  We then entered all the names into an Instagram scraper and filtered by geotagged posts. For the list of celebrity vacations, we scoured celebrity sites to find verifiable evidence of where celebrities visited between December 1, 2014 and January 15, 2016.

Feel free to share the images found on this page freely. When doing so, please attribute the authors by providing a link back to this page, so your readers can learn more about this project and the related research.