As is the Swiss way, Pilatus Aircraft Ltd. is renowned for taking a pragmatic and extremely efficient approach to building its successful line of aircraft. The fact that they currently only manufacture three civilian planes, plus a handful of military trainers, should tell you something about their obsessive attention to detail.

Established shortly after the start of World War II in Stans, Switzerland, Pilatus originally began performing maintenance and repair work for the Swiss Air Force. In the ensuing years, they developed numerous prototypes while continuing to earn production contracts with the Swiss Air Force.

However, their first major breakthrough for Pilatus came in 1958 with the PC-6 Porter. This short takeoff and landing (STOL) light aircraft earned the company worldwide recognition. In particular, this single turboprop can:

Furthermore, it can take off from unfinished runways, which gives this utility aircraft the ability to access airports in remote areas. As a testament to its durability, the PC-6 remains in production today.

Pilatus currently manufactures one other turboprop: the PC-12 NG. Many recognize it as the most successful pressurized, single-engine business aircraft available today. Much of its success is due to its versatility. Its intended uses include:

Like the PC-6, the PC-12 is equally suitable to fly as a people carrier or cargo aircraft. There are seating options for between six and nine passengers inside the 330 cubic-foot cabin, which measures:

As evidence of its popularity among private jet travelers, the PC-12 is the most frequently requested turboprop at Stratos Jet Charters.

The newest member of the Pilatus lineup is the PC-24. Dubbed a ‘Super Versatile Jet,’ the Swiss manufacturer claims to have combined:

Indeed, the PC-24 shares the same ability to take off from short runways (2,690 feet) while providing a 501-cubic-foot cabin capable of carrying up to 10 passengers. Also, it can access unpaved runways.

Today, Pilatus is a company on the rise. Since 2012, total sales have nearly doubled to US$1.13 billion. Additionally, order volume is up significantly in 2015 from the previous year. Last year, Pilatus received more than $1.38 billion in orders compared to $566 million in 2014. 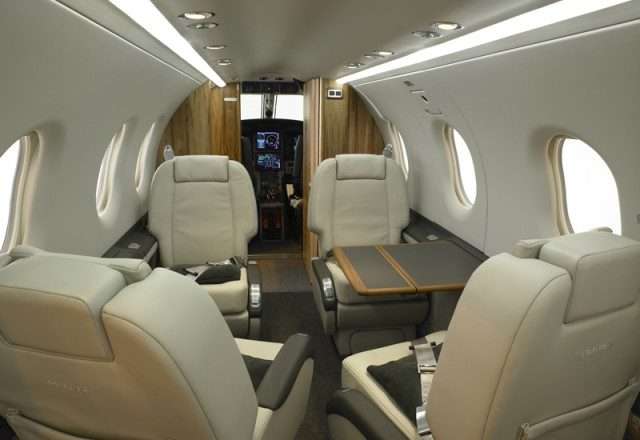 It currently employs a staff of more than 1,900. It also has three subsidiaries worldwide, including:

However, the headquarters remains in the municipality of Stans, right at the base of Mount Pilatus.