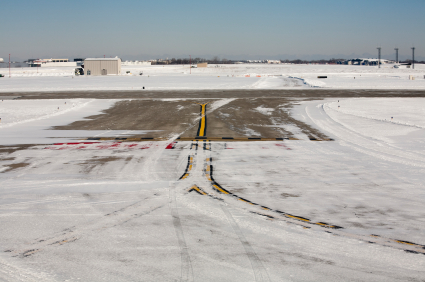 Snow covers the directional signs, runways and airport facilities during after a heavy winter storm.

Snow and ice pose a number of different potential threats to private jet charter flights. First, when snow and slush are not properly plowed off runways they can increase minimum takeoff and landing distances for private jets. This creates potentially unsafe conditions, and increases the amount of time it takes for flights to safely takeoff and land which then causes air traffic delays.

Second, ice which forms on private aircraft also changes the shape of the wings and tail, altering the flow of air over the plane and causing critical control surfaces to become rough and uneven, which increases the weight and drag upon the aircraft and thus reduces lift capabilities. And if large pieces of ice separate when the aircraft is in motion they can be ingested in engines or hit propellers, and cause a potentially catastrophic mechanical failure.

To avoid these dangers, de-icing an aircraft on the ground prior to departure when there are freezing conditions and precipitation is crucial, which can take extra time and cause possible delays. The pilots use de-icing techniques on the wings and body of the plane, and also near engine inlets and sensors on the outside of the aircraft to be sure they are clear of ice or snow.

Another potential icing problem occurs in flight, where droplets of supercooled water often found in clouds, and abruptly crystallize into ice when they are struck by the wings of passing aircraft. Once again this disrupts airflow over the wing and reduces lift. All charter aircraft arranged by Stratos Jets that are expected to fly in such conditions are equipped with de-icing and anti-icing systems.

Air charter flights to New York and along mountain ranges such as the Sierras, Cascades, Appalachians and Rockies are locations that frequently encounter these hazardous icing conditions. Departing out of fog-prone areas on the coasts can also be difficult during the fall and winter months. As frustrating as aviation delays due to winter weather are for private jet travelers, they are sometimes unavoidable.

When winter weather affects your flight, the pilots, air traffic controllers and your Stratos Jet agent will work together to find an alternative solution without compromising the safety of your flight.

To avoid snow and ice weather delays, Stratos Jet Charters often utilizes larger, metropolitan airports during the winter months, as they typically have the necessary equipment to plow snow quickly off runways and can provide hangar facilities to prevent ice from forming on aircraft overnight. We also utilize airport hangers to avoid the threat of aircraft icing conditions.

When weather causes your original flight plans to be canceled or delayed, our expert private flight advisors can also provide you with plenty of back-up options among the thousands of airports worldwide that we can utilize, including those near to your destination with more favorable weather conditions.

During these circumstances, it’s nice to step off your charter jet and directly into a waiting vehicle, which is especially helpful when your flight has been diverted to an alternative airport which is unfamiliar to you. In these situations, allow Stratos Jets to arrange luxury or rental ground transportation for you as part of your itinerary.
As your single source for private transportation services, we are able to quote and book your entire trip with a one call, one invoice and one relationship, providing you with a true end-to-end transportation solution.

At Stratos Jets, we believe flying should be a peaceful, stress-free experience. Our private flight advisors closely monitor your aircraft and communicate with your ground transportation to ensure a fluid and convenient process, and have the cold weather expertise to help you and your loved ones travel safely during the fall and winter. We only work with the finest Part 135 aircraft operators that have the safest, icing-equipped and Wyvern compliant aircraft, and also the most experienced flight crew, trained to handle the effects of cold weather flying.